Tarot of the Night 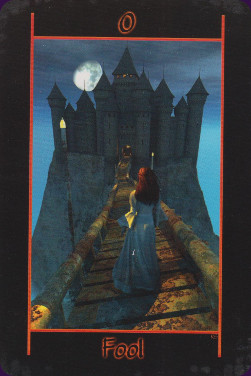 The Tarot of the Night is a dark and gothic deck from Richard Shadowfox of the ShadowFox Tarot and Tarot Deck of Heroes. This 78-card deck is illustrated in a 3D graphics style and has a horror movie feel.


Card Images from the Tarot of the Night 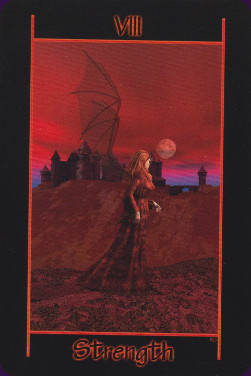 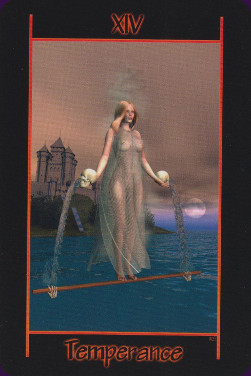 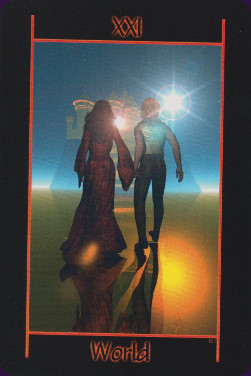 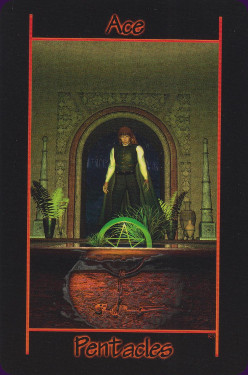 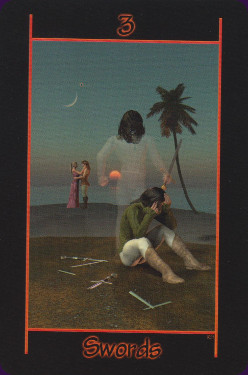 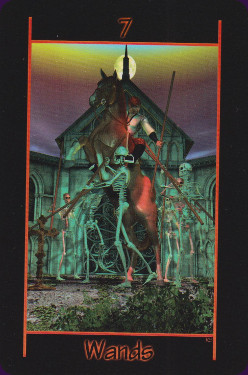 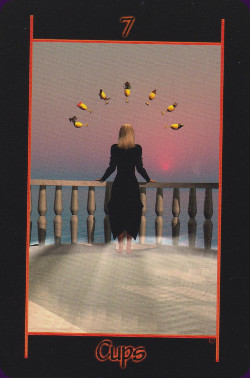 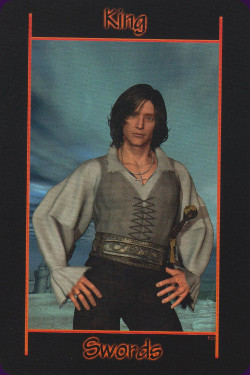 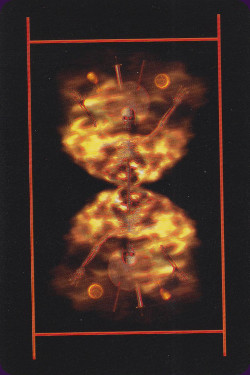 Tarot of the Night Review by Thomas Freese

Tarot of the Night is a standard deck of 78 tarot cards which appear to be computer crafted and feature scenes at night or in misty tones. The human characters are compelling in their attractive features; yet despite thin see-through gowns and buff boys the wisdom of image and the level-headed discussion in the companion book offer substantive opportunity for learning and self-reflection.

The book indeed offers a well-done treat of organization, including keeping the font size big enough for readability. Small of dimension, at approximately 5 ˝ by 7 ľ inches, it nevertheless encompasses 256 pages and includes near-full sized black and white images of each card, interpretations for upright and reversed positions, and three spreads of which the last shown is an original composition called Vincit Omnia Veritas, or Truth Conquers All. This intriguing spread features select drawings from five sub-decks—the suits and major Arcana—for 8 placements, and then reshuffling the remaining cards to finish by drawing five additional cards. The layout could be described as working in from four directions progressively to the 13th card, which lies in the center.

The cards are just the right workable thickness, coated and with rounded corners, measuring 3 3/8 by 5 inches and stacking to 1 Ľ inch. The card backs have a framed, symmetrical image that gives the rough impression of an organic hourglass; actually inside the explosion of fiery yellow orange, a small skeleton lifts raised arms. One nice discovery is the variation from standard card images to more creatively depicted scenes. For example, the fool shows a woman walking away from our view. She traverses a wooden bridge toward a mysterious and dark castle. Visual elements of the erotic are tastefully blended in with card scenes, as with the Star’s naked female body seen from behind. Also macabre elements grab attention, such as in the 5 of Swords which depicts a man trapped in an open grave, accosted by a set of four skeletons.

Ghosts are given their due, showing in a number of cards, including the 6 of Cups, which shows our femme looking back and down from a gothic looking stair case. Pentacles are shown as circular discs and glow in yellow-gold—a bright contrast to the nighttime dark background. The 2 of swords here becomes a pair of swordsmen, facing off on a plank rope bridge above a rocky river gorge; these scenes not only indulge the eyes, suggest a movie like surround of the senses, but more importantly draw in the viewer to explore the narrative beyond the stereotypical tarot image.

A pleasant surprise when reading the companion book is the discussion embedded in the text; each examination of every card follows an almost philosophical flow of thoughtful options for connecting the potential meanings to the psychodynamics of our own life. I can honestly say that, when I had looked at the 6 of Swords, my focus was on the passengers in the boat moving away from difficult times. Here the author puts emphasis on the guide, the person or spirit or pet animal or whatever that transports us, saying for example, on page 90: “The primary element of this card is not a need for assistance, recognized or not, and that one is not alone and should not choose to be suffering entirely within.”

Although this is the author’s third tarot deck, I prefer to evaluate each deck regardless of prior work, and the Tarot of the Night suits me just fine, for it offers new elements of both image and interpretation. The book is well done and all packaged in the attractive Schiffer box. I will keep this deck and I imagine my visitors will be drawn to the images also and try their hand at finding self-understanding in the cards and book.


Complete Details of Tarot of the Night


Similar Decks to Tarot of the Night

Home > Decks > Tarot of the Night