Tarot of the Saints 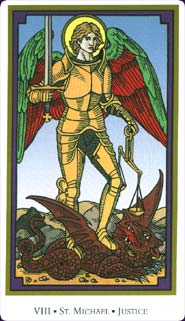 A Christian saint is associated with each major and court card in this well-researched and consistent tarot. The Tarot of the Saints is a strictly historical tarot, with no occult or personal symbols included.


Card Images from the Tarot of the Saints 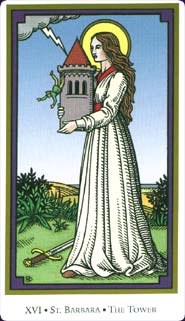 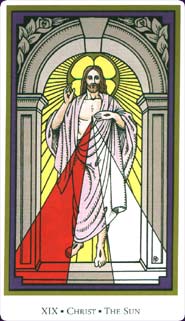 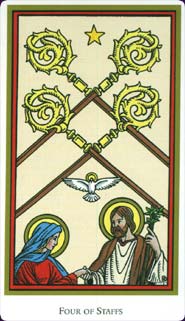 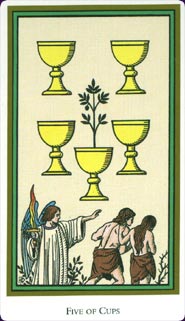 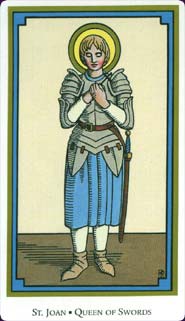 Tarot of the Saints Review by Solandia

Christian saints have always had associations and attributes - St Valentine for Love, St Christopher for travel, and sundry others for almost every aspect of life. (At last count, there are over 4500 registered saints.) This 78-card Tarot of the Saints emphasises the links between the saints and archetypal tarot figures.

Unlike some other decks, the Tarot of the Saints has taken me a while to absorb enough for an adequate review. It is a very consistent deck visually and quite simple on the surface, but the creator, Robert M. Place, has gone deeply into the historical evidence that supports the concept of tarot and its symbols.

A saint is pictured and named on the major arcana and court cards, while the suit cards show more mundane human situations. The minors are a cross between pip cards and illustrations - each card depicts the exact number of items for that particular card in the cream-coloured sky. The bottom of the scene is an appropriate bible tableau.

The art is just this side of too plain. But then it isn't a deck relying on good looks for interest. The cards are firmly based in documented historical fact, and devoid of 'occult dogma' and personal symbols. The saints and images are chosen with thought and backed up with hard evidence.

The companion book is titled 'A Gnostic Book of Saints'. It is quite a scholarly companion to a set of tarot cards. Twenty pages are dedicated to a thorough history of tarot before we get anywhere near the card interpretations.

The card information in the companion book provides an appropriate quote, a picture of each card, a short summary of the card, a synopsis of the saint's life and claims to fame, and an intellectual discussion of the card's history and original symbols. The 'tarot wisdom' (or divinatory meaning) of the card occupies a comparatively small amount of space. This does lead to a book heavily weighed towards the majors - the numbered suit cards are not associated with any particular saint and have a few short lines describing the card's picture and offering an analysis of the meaning.

In short, the Tarot of the Saints is not a lightweight tarot deck. Robert M. Place's tarot decks are well researched and reliably professional. If you like a serious, scholarly tarot with a Christian background, this is the one for you.


Tarot of the Saints Review by Bonnie Cehovet

"Tarot Of The Saints" is a deck that I have been wanting to work with for a long time - probably ever since it came out! I have been on internet e-lists with Robert Place, and found him to be a gentle, caring person carrying a great deal of wisdom within him. The deck reflect this - the cards are done in a gentle manner, very "clean", with nothing that will distract the eye from what it is supposed to see.

I want to share with you a snippet from the foreword, written by Robert V. O'Neill (aka Bunny Bob), author of "Tarot Symbolism" and a keeper of wisdom himself.

"There is little, if any, consensus of opinion on the meaning of the Tarot symbols, and considerable room for personal meditation and interpretation. In this book, Place presents the results of his own personal explorations. Some of the interpretations may strike the reader as idiosyncratic and there is no need to accept everything as gospel. But the reader will find here a deep well of insight, challenging to one's intellect and inspiring to one's intuition."

I could not agree more! This is much more than a graceful deck with a nice book accompanying it. If one is to make best use of this deck, on all levels, read the accompanying book, "A Gnostic Book Of Saints", with an open mind and an open heart. You will find yourself on a journey that will open many doors of wisdom, and many levels of understanding.

For Robert Place, the introduction to Tarot came in a dream, a dream that turned into a prophecy. There is a wonderful sharing here of the importance of dreamtime, and of the manner in which dreams, and their symbols can be interpreted. As with all of this book, the writing is clear, concise and leaves the reader feeling as if they have been in a personal conversation with the author, rather than winding their way through a scholastic tomb.

The scholarship is there, don't get me wrong. It is sharp, and clear, and sings of research and personal experience. The history section that begins this book is lucid, fair and intriguing. We feel as if we went through the times under discussion, and are left with a clear timeline on the Tarot and the people involved.

There is a wonderful section on mystics, gnostics and saints, based on mythology, that is a wonderful trip down memory lane. It also presents clear lines between these categories, and makes for a better understanding of this deck.

The section on the mystical interpretation of the Tarot should be required reading for all levels of Tarot students. Beginners will understand a little, those who have worked with the Tarot will start to have the foundation of the cards fall into place and advanced students will find information here that may help them past individual "stumbling blocks". Place discusses the Tetracys, the Pythagorian symbol for ascension from the physical to the spiritual world.

He discusses the four-fold physical world (four elements, four directions, four seasons), and connects them to the four suits. Included are some wonderful classical images, including the Madonna Enthroned and French Tarot card images from the seventeenth and eighteenth century.

I loved literally every single card in this deck. I picked out a few for reference that stood out more for me than the others did. Saint Anthony of Egypt (The Hermit) is portrayed and an elderly man, walking with a staff in one hand and a bell in the other. He wear a red hooded garment, covered by a brown cloak, and has a lemniscate over his head. The intriguing thing here is that the figure is facing the right - towards the future, rather than the left - towards the past.

The Ace of Coins struck me because of the letters held within the symbol for the coin. They are the monogram for Jesus, from the first three letters of Jesus' name from the the Greek alphabet. I keep being drawn back to this - as simple as it is.

The Papesse (Saint Mary Magdalene) shows a woman standing in front of a crypt, wearing a white dress and a red cloak, with her hands crossed in from of her at chest level. Over her head we see the Lemniscate.

Saint Francis (The Fool) shows Saint Francis, garbed in a brown robe, standing with his hands held up and facing outward so that we can see the stigmata on each palm. There is a rabbit seated at his feet, and a dog standing in front of him, look out at the reader. The landscape is lush green, with birds seated in a tree in front of him and one bird flying over his head, where we see a Lemniscate.

The Pips were done in an interesting manner, with the suit symbols taking up approximately two-thirds of the card, with the bottom third depicting scenes with figures in them.

I highly recommend this deck for all levels of students. It is a given for meditation, a good source of study for symbols, and an excellent deck to use for both personal and public readings.


Complete Details of Tarot of the Saints


Similar Decks to Tarot of the Saints

Home > Decks > Tarot of the Saints