Tarot of the Trance 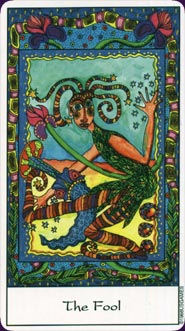 Unique in appearance, the Tarot of the Trance deck is a riot of bright colours in a decorative, somewhat 'primitive' illustrated style surrounded by plain white borders.


Card Images from the Tarot of the Trance 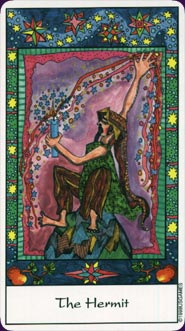 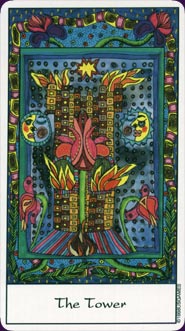 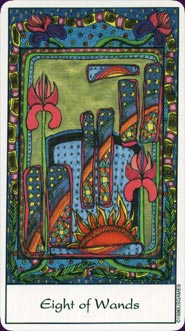 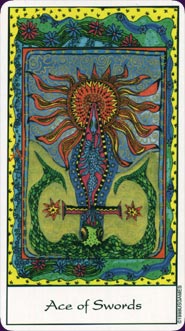 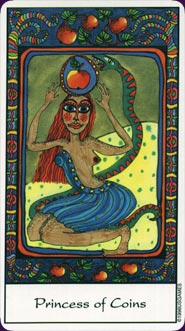 Tarot of the Trance Review by Eala the Shy

When I picked up the Tarot of the Trance in the local New Age bookstore, I was struck by the amazing color and artwork, though simplistic. What I soon discovered as I investigated this deck in my own hands for the first time, was that the deck may be simplistic in artistic style but certainly not in depth and vision. When I showed the deck to my husband, we soon nicknamed it the "tarot on acid".

Tarot of the Trance consists of 78 cards with Major and Minor Arcana cards. All of the cards have the usual names except for Pentacles are now Coins, and Pages are now Princesses. The Minors are named the same, Ace-10, but the Majors are not numbered. I do not think these changes detract in any real way.

This is definantly a unique tarot deck. This can be seen in the Major Arcanas, such as the wide-eyed Fool, dressed in a green leaf tunic with brown striped leggings to match his stripey, wandering dreadlocks. He sprinkles his stars, spills his chalice (perhaps reflecting his carefree/careless nature), and carries a pink and purple flower that looks orchid-like, similar to the flowers seen throughout the deck. The Wheel of Fortune pictures four strange, unidentifiable creatures riding a many spoked wheel out of which flowers grow. The High Priestess is a feminine plant spirit emerging from a white egg, a very different view of this card, but one I find adds a lovely new dimension. I found the green female creature on Judgement a little disconcerting and was confused as to how it related to the meaning of this card. The Devil was another disturbing image of a horned, red creature encircled by blue serpents.

The Minor Arcana I feel, are the real strength of Tarot of the Trance. Though the symbolism is not the traditional illustrations weve all come to expect from Rider-Waite-Smith, it has a language all of its own, that is still quite readable. All four of the Aces are strong, my favorites being the Ace of Wands and Ace of Cups. Many of the Coins feature faces or fruit, eyes, suns, moons, or even pentagrams. The Wands are more like pillars or blocks with pictures within.

There are pictures within pictures. The Cups are pretty, multicolored, elaborate vessels. Many cards of the Cups suit feature fish, flowers, water and rain of course, crystals and hearts. The Swords are somewhat unpleasant but fascinating to look at, showing more foreign creatures and decorated blades in various formations. The Court Cards are great characters, such as the Queen of Wands, a spirited, naked woman, with leaves in her red hair and holding a leafy wand spraying a fountain of stars. A half-scaled Queen of Cups swims in a colorful chalice while her arms turn into fish. Her hair is blue waves. The Queen of Coins is half-frog, half-woman, wearing a necklace of pentacle beads juggling coins with fruit. The Courts have such wonderful personalities, we would be on a first name basis, if I knew their names.

I don't know that this is a deck as well suited to beginners as it is to intermediate and advanced readers. But if you are a person looking to exercise your intuition, this tool has a distinctive voice. In fact, I would highly recommend just letting go and using pure intuition and gut feeling when reading with the Tarot of the Trance. This is one you will want to take time and examine the details. Be open minded and receptive. I think it would be great for enhancing creativity as well.

I recently had the chance to "test run" this deck when a friend wanted a reading. She said it's not the style she would be drawn to read with but was intrigued, like a car wreck, she could not look away, and insisted on a reading. I, too, was curious and needed the practice anyway, so explaining that it was a maiden voyage for the deck, we proceeded. When I later asked her for feedback on the reading, she said that she had gotten meaningful information from the reading that was relevant to her issue and felt better. And I felt good about the reading from my standpoint. I felt there was almost instantly a voice or communication from/through the deck and that I as a reader, seemed to respond well to it. This deck also has a similar vibe to the World Spirit Tarot, perhaps because of the roughness of artwork and intense color. Who knows. I do know that after playing with the deck for just a few days, it is a exciting addition to my collection.

Don't be afraid of this one, see if you can hear its voice. Happy reading!


Complete Details of Tarot of the Trance


Similar Decks to Tarot of the Trance

Home > Decks > Tarot of the Trance