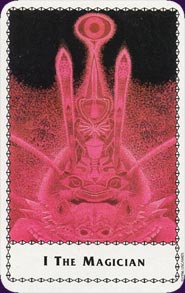 The Terrestrial Tarot has 82 non-traditional cards of insectoid and alien-looking Tarot imagery. Each card has a symmetrical image of animal parts in a predominant colour. The deck also has four extra cards for Fire, Earth, Water and Air.


Card Images from the Terrestrial Tarot 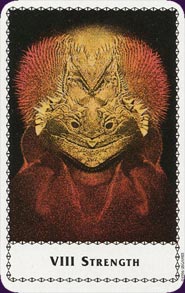 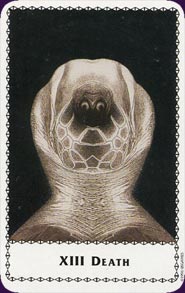 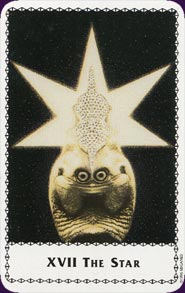 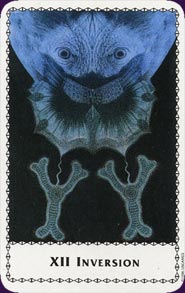 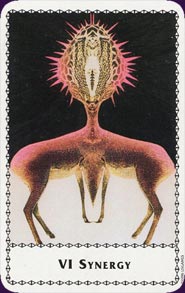 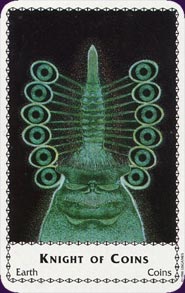 Ewwwwwwhhhh, I needed therapy after seeing this deck for the first time – but it has a strange magnetism about it which kept me infatuated for a while.

Published by US Games in 1996, it came during a relatively dry spell in the world of tarot – the period just before lo scarabeo began publishing their 78 card decks (bless their cotton socks for keeping my tarot fetish satisfied, despite their oft-repeated mangling of what constitutes a tarot deck).

Watkins, my London source for tarot in the last 17 years, didn’t have samples of this deck, but I bought it sight unseen anyway. What a shock! The images sent me reeling, knocking over a pile of self-help books, buddhas and joss-sticks.

The LWB explains that the images are from nature, however these images have been mirror-imaged so the end result is disturbing and mutated. Despite this, there has clearly been some effort to find images which in some way express the meanings of the cards – the forlorn looking mutant on the 5 of Cups, the expansive, benevolent creature on the 6 of Coins.

It’s been out of print for a long time, deservedly so. However, on the positive side, it presents a challenge to attempt to make a relationship with the images and discover how they express the meanings. And despite the weird imagery, this was one of a limited number of decks that were published in the late ‘90’s that challenged the RWS clones, without changing (in most instances) the traditional meanings of the cards (by traditional I mean those agreed by the Golden Dawn, and expressed in the Thoth and RWS).

If you find a copy, I hope you have fun with it – and not too many nightmares!