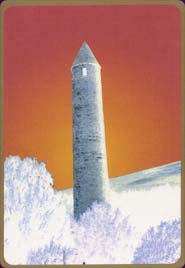 Titania's Fortune Cards are a modern reinterpretation of Mlle. Lenormand's Fortune Telling Cards. These cards are very simple - each featuring a single object - and are almost fluorescently coloured. 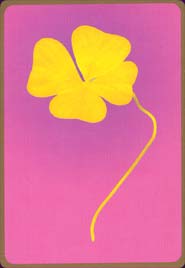 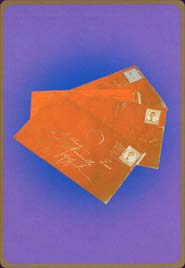 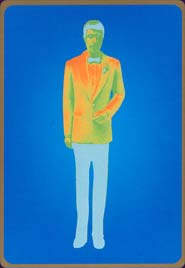 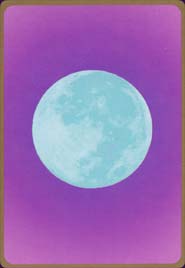 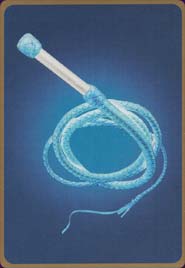 Published in 2000, Titania's Fortune Cards are a modern adaptation of the Madame Lenormand Fortune-Telling deck.

Hardie states that these cards are easier to understand than the Tarot, and perhaps more flexible, as the cards can be laid out in a number of ways. Personally I feel that Titania has breathed new life into these otherwise archaic images, though I suspect that some would feel that she has totally butchered the original symbology.

As with all of Titania's merchandise, this set is exquisitely presented. The set is contained with a metallic-gold, hard-covered folder. When you open out the folder, there is a cubby-hole on the left for the cards and the accompanying book is on the right.

The book is 96 pages and it dedicates two pages to each of the 36 cards. One page contains a comprehensive description of the cards meaning, the other shows a coloured picture of the card. The book also contains a section on Understanding the Cards; How to Lay Out and Read the Cards; Three different spread layouts (with sample readings); and a quick overview of the card meanings.

The suggested spreads are: seven-card (for a daily reading), nine-card (for a weekly reading), and 36-cards (for a monthly spread though it is suggested that you do this extended reading once every three months).

I like to use the nine-card spread and then select a card from that to do the expanded (36-card) spread. Usually I will use the card that looks odd, or out of position, so that I can learn some more about it. However, it is not uncommon to take more than one card from the nine and do an expanded reading on each. Interestingly, this is where the common and underlying themes are repeated.

Unlike Tarot, these Fortune Card spreads do not have a position meaning. Rather, the cards are read in sentences and their interpretation varies depending on where they fall in relation to one another. So it is the combination of some cards that bring meaning to the reading. However, some combinations of cards mean nothing, and then the individual interpretation of that card is applied.

I love the artwork. I find that it is colourful and simple and can evoke intuitive responses. Many of the meanings can be applied literally. For example, the child with the stork would represent a pregnancy. The man and the dog, means a friendly man. The backs of the cards display mini images of the 36 card fronts - very bright and colourful imagery.

The deck does not reveal time frames, though I expect this could be intuited easily by the reader. Ive found that in general that the extended (36-card reading) can often take up to three months to come to fruition. This may be why Titania suggests that it be used over that period.

This was the first ever Tarot/Oracle deck that I purchased and I made an immediate connection with it. It is a reasonably priced deck, I paid under A$20. I would recommend it for anybody who is interested in quick and simple readings. However, be warned, it can also provide insight into deep or hidden problems.

These cards are based on Madame Lenormand's cards, who was the clairvoyant to Napoleon. There are 36 cards in this deck and there are two ways to read with these cards: a 7 card spread which will give a feel of what is to come in the next couple of days; a 9 card spread, which can be used for a weekly forecast, and is set out in 3 rows of 3 which you turn over one by one and read in rows, first straight across, then down, and then in diagonals; and a full 36 card spread.

The cards themselves are very plain, with a central picture on a colored background such as a blue goldfish on an orange background, or a white bear surrounded by a blue circle with a purple background. The pictures might be simple but the messages that you get from them are very powerful indeed.

The only thing that I don't like about this deck is that unlike the Tarot, where you need quiet a few cards to predict a death, with these you only need 2, the scythe & coffin together, Titania says that only these two card combinations are as final as this, and I do know this from experience otherwise the scythe on its own means swift change, and the coffin on its own means stagnant situations, so if it fell by your own first or central card it speaks of a waiting time to be endured.

A book also comes with the deck and has a full page description for each card. An explanation of the meaning of each of the cards is given individually, and when combined with other cards.

I think this is a fantastic deck, suitable for the beginner as well as the advanced reader. Even though you are given meanings for the cards, a large part of it depends on your intuition. My 12 year old daughter has started to read these cards, and finds them quite easy to use as I make her think of her own meanings then let her look up the meaning in the book. Even at this early stage she already has her own meaning for certain cards.

I can not recommend this deck more highly. The cards are uncanny in their accuracy, and the client doesn't even have to ask a question. I only use these cards when I read for clients now, as they always provide the answer whether asked or not, because of course you can ask a question like you do with Tarot, but this is where I think it beats the Tarot, as sometimes you don't know what's wrong and have trouble forming a question, well with these you don't have to, and it's great for the client who just wants a general reading. I could go on and on about these cards, but enough - just buy them! You won't be disappointed.