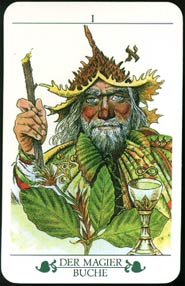 The Tree Tarot (das Baum Tarot) is a German deck that assigns a tree to each major card. The illustrations are focused on the head and shoulders of the traditional Rider-Waite characters, and each card shows the figure with its associated planetary, zodiac, tree and Hebrew letter. The cards are small, about playing card size. 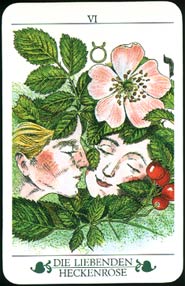 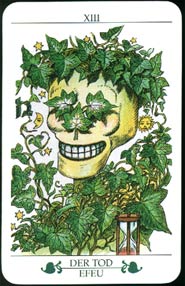 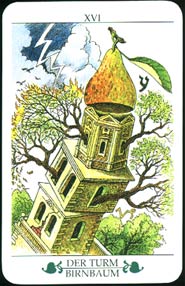 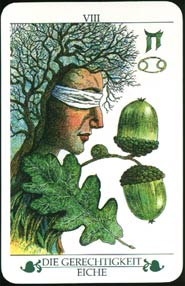 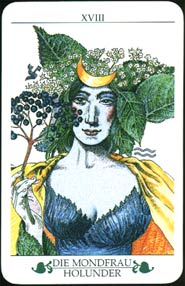 The Tree Tarot (or das Baum-Tarot) is a 22 card major arcana only deck. Based on a German book that translates to 'Madru - of the Great Forest', the creators of this deck have assigned a particular Northern European tree to each card, representing certain situations in human life - hopes, fears, desires, conflict, wishes.

Living in subtropical Australia, I do not often see European trees. I didn't recognise all or even most of the trees when looking through the cards, especially as the explanatory titles and text are all in German - it is a German published deck.

Fortunately, not all cards are esoteric timbers; some, like Apple (the World) or Pear (the Tower) are obvious. Other cards show Ivy assigned to the Death card, Walnut to the Wheel card, and Larch to the Hanged Man. A person, face, head and shoulders, or full-body is entwined or associated with each specific tree, and all the people have calm, almost remote expressions.

The art appears to have bene drawn in pen and ink and then coloured. The backgrounds of the cards are white, each card is numbered in Roman numerals at the top, and the card title and its tree is typed at the base. The cards seem frail, being small - the size of standard playing cards - and printed on thin cardstock. Card backs show green diagonal prints of trees in winter, on white.

The cards of the Baum-Tarot are packaged in a sturdy plastic container. Along with the 22 major arcana cards, ten extra cards are included with instructions, spreads, keyword meanings and a bibliography printed in German. The meanings are open-ended, and allow the reader to make their own assocations.

Not a tarot deck for everyone, this is more a deck to appeal to the serious collector, the nature lover, and German speakers. I think the cards are cute, and I would even occasionally use the deck for serious readings.