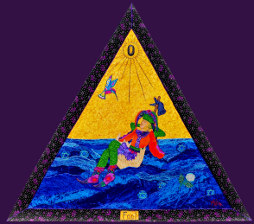 The Trilateral Tarot: Universal Truths Consciousness deck has 22 cards shaped as equilateral triangles. The shape allows for three orientations for each card - upright, left and right (relating to the conscious, unconscious and meta-conscious). The card art has been developed from scraps of cloth arranged in collage. The deck and booklet is available in a limited edition from the artist.


Card Images from the Trilateral Tarot 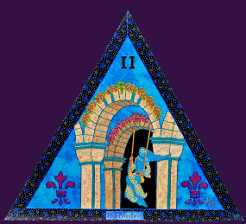 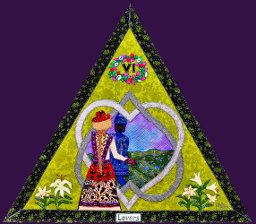 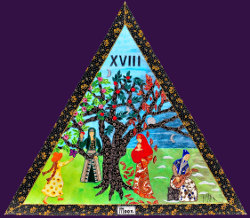 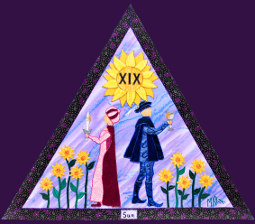 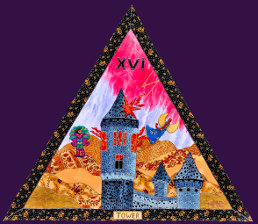 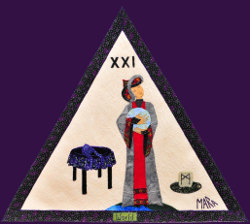 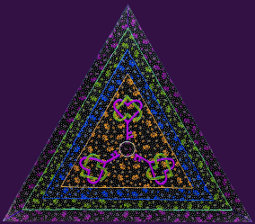 Thoughts on the Trilateral Tarot by creator, Mara Thorson

Trilateral Tarot offers what I believe is a unique approach to the traditional Major Arcana. Each of the twenty-two hand-crafted cards in this deck and book set:

- Portrays a familiar yet unique symbolic representation of the conventional Trumps.
- Mirrors a Universal Truth or Law associated with the card.
- Parallels three psycho-metaphysical interpretations based on the specific card and its direction in the Tarot spread.


The idea for these triangular-shaped Trump cards emerged in stages. They evolved from thoughts about the traditional Tarot images and the meanings, names and numbers generally assigned to them. It began as a reflection on my first encounter with the Tarot over twenty-five years ago when I revisited the feelings of esoteric excitement and euphoric recognition that the pictorial images had elicited. Suddenly I understood. The archetypal imagery had touched a part of me which had lain dormant for many years. It had reached out to my Soul and encouraged me to remember my connection with the Source. Through a conscious union with my Spirit, I had found my way home, the path to my Self.

It was at this point that I knew my cards would have to take on a non-traditional shape to address the multifaceted personality. They would be triangular with each side addressing a different level of the mind—the conscious, unconscious and meta-conscious. The interpretations would be based on a metaphysical, psychological approach highlighting aspects of the Soul’s journey back to the “home” I had glimpsed through the Tarot so many years before.

When I began to consider the numerological significance of each numbered Trump and its relationship to the names and meanings of the cards, patterns of triangles began to emerge, forming different possible conscious, unconscious and meta-conscious paths to enlightenment. I think it was then that the number six, the Lovers card, literally jumped from my hands. I realized that when all twenty-one numbers of the Major Arcana are added together and reduced, the result is the number six, the card of Wholeness, the card of Unity, the key to spiritual enlightenment. And just as spontaneously, the cards began to associate themselves with various Universal Laws or Truths. It was more of a happening than a concerted effort to orchestrate a connection, and before long, I had been given corresponding Universal Truths for each of the Major Arcana.

The shape of these Major Arcana cards lends itself to multiple interpretations of the same theme. With cards shaped as equilateral triangles, we are immediately alerted to the particular level of significance indicated by the position of the image that is drawn and placed before us. For example, in the upright position, the symbolism of the card relays an interpretation of the Universal Truth associated with that specific Trump. Ideally, this upright position communicates with our meta-conscious mind, the part of us that remains forever connected to our eternal Spirit. When the Tarot card points to the right, the card speaks of issues related to the conscious level of the mind. Pointing to the left, the same Tarot image addresses concerns of the unconscious mind.

Just as the idea materialized in stages, the actual cards developed piece by piece from scraps of fabric constructed in a collage-type fashion. The related interpretations arose from the images as well as the Universal Truths reflected in the individual cards. Finally, corresponding affirmations and the design for the back of the cards presented themselves, and Trilateral Tarot: Universal Truths Consciousness was born.