The Undersea Tarot is illustrated by comic book artist, Frank Fradella, who also created images for the Fradella Adventure Tarot. This deck has fairly simple imagery of mermaids, mermen, fish, and real and fantasy inhabitants under the ocean waves.

Card Images from the Undersea Tarot 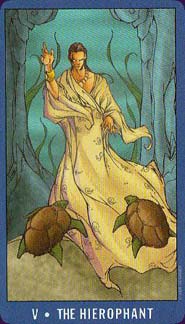 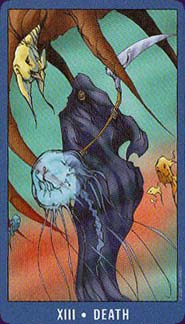 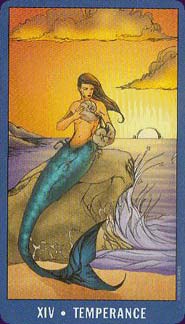 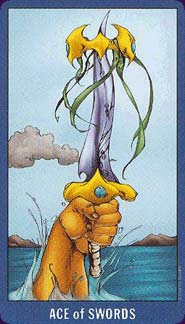 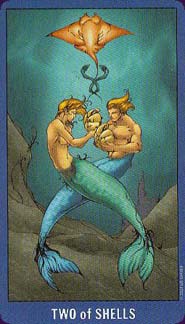 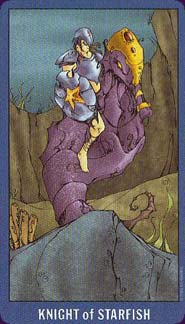 “Here be monsters!” Quote from the Little White Book.

The Undersea Tarot is a loosely based RWS theme based deck designed for those who have a fascination of what lies below the vast waters that cover nearly three-quarters of our great planet. Many of the creatures depicted in this deck, actually exist in our waters today. There are also many mythical creatures living in this deck.

The suits in the Minor Arcana, in this deck, have been changed from the original Swords, Cups, Wands and Pentacles to Swords, Shells, Tridents and Starfish. The Major Aracana all retain their original titles. The Strength card is number eight in this deck and Justice is number eleven. The

deck is 2 ľ inches wide by 4 ľ inches tall. The back of the cards are reversible friendly. There are very narrow sea blue-green borders. There is great use of primary colors, as focal points, in this mostly blue-green deck.

With this deck, we are gaining some insight below the surface, in order to enjoy this deck, one must not have any challenges with nudity, as a majority of the mermaids are top-less.

The creator of this deck, Frank Fradella recommends Eden Gray’s A Complete Guide to the Tarot as a well balanced place to start for beginners and offers his Little White Book as a shorthand exposure to divination. Other work by Frank Fradella include the following books The Complete Idiots Guide To Drawing Basics and Valley of Shadows.

The Little White Book included with this deck mentions the Celtic Cross, the Zodiac Spread, and the Kabbalah method of approach after one becomes familiar with a single card reading daily. The LWB mentions a copy of the layout for the Celtic Cross that is included in the package, however this was not included in the copy I received. vThe deck itself is made of a quality card stock with very little lamination. The cards are a bit rough on the edges, so do take care of your hands while shuffling. However, with little effort one could easily break this deck in, quickly.

Anyone who is an enthusiast of DC or Marvel Action Comics would find this deck to be a nice addition to their personal collection. This deck will also be attractive to anyone who enjoys diving, snorkeling or those who are fascinated by Mermaids and other mythical sea creatures.