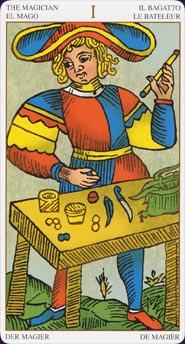 The Universal Marseille Tarot is based on a Swiss deck created in 1751 by by Claude Burdel, retaining the woodcat look but with more natural colour shading. It has now been published as a standalone deck, and is due to published later as a kit with a companion book written by Lee Bursten. 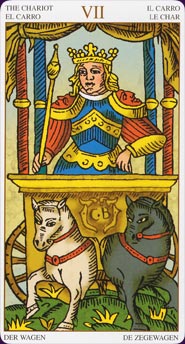 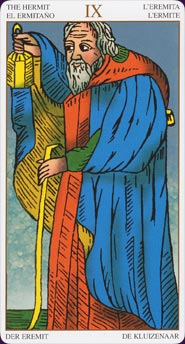 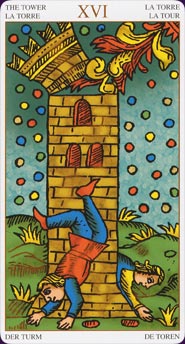 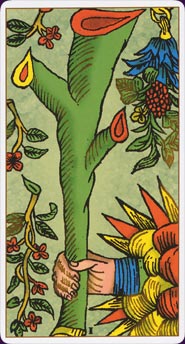 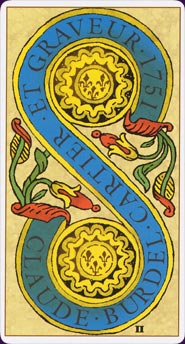 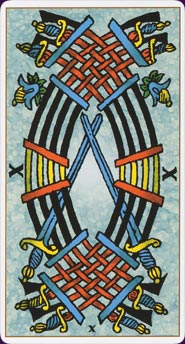 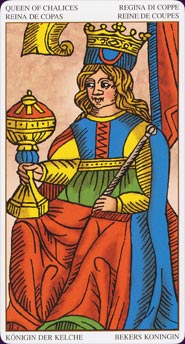 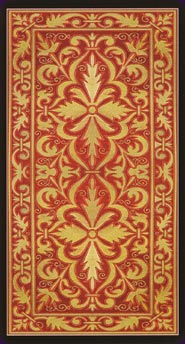 The "Universal Tarot of Marseille" deck is of the Marseille pattern, based on a Swiss deck created in 1751 by Claude Burdel that has been recolored (newly colored). One of the telling marks of a Marseille style deck, if not THE telling mark, is that the pips (the numbered cards) are not illustrated. This is a style of deck that still retains its popularity in Europe.

The suits are Staves, Chalices, Swords and Pentacles. The Court cards are King, Queen, Knight and Knave. The Trumps follow traditional titles, with Justice as VIII and Strength as XI.

The Marseille deck, rather than being used primarily for divination, found its primary use for card-playing, both in gambling halls and in private homes. The Marseille decks were printed from woodblocks, and retained a plain, unassuming art form. Bursten posits that when occult scholars of the eighteenth century discovered their idea being reflected back at them from the images in a lowly deck of playing cards, that it was the Marseille deck they were looking at. Thus, the deck pattern that held such popularity in game-playing also became the focus of occultists.

Bursten points out that the images that were perfectly comprehensible to the average fifteenth-century card player were mysterious to the eighteenth and nineteenth-century occultists. Mysterious, yet strangely familiar. Thus the Marseille Tarot was part of everyday life (gaming), as well as an object of philosophical and spiritual study. When used for divinatory purposes, the Marseille deck allows us to access the commonplace and the spiritual - the root of Tarot as we know it.

The LWB contains translations in English, Italian, French, Spanish and German. There is an introductory section explaining what the Marseille tradition is, and its importance in the Tarot world. In the introduction to the Trumps, Bursten presents an excellent picture of the 3 X 7 tradition - something you normally would not see in a pamphlet this size. Keywords are given for the Trumps only, followed by definitions for the numbers Ace through Ten, and the court card rankings. There are examples given for interpreting the cards given the information on the numbers and the suit meanings.

The divinatory meanings for the Trumps in the LWB were derived from the history of the Tarot images, and from what they might have meant to an average person in the fifteenth through seventeenth-centuries. For a more in-depth study of the images, "The Marseille Tarot Companion", by Lee Bursten, is recommended.

In the LWB, individual meanings are not given for the pips and court cards. Instead, meanings are given for the numbers (Ace through Ten) and rankings (King, Queen, Knight and Knave). To interpret the cards in a spread, it is recommended that the reader combine the number meaning with the suit meaning.

The suits are defined as areas of human experience. The keyword for each suit is: Staves - creating, Cups - interacting, Swords - defending, and Coins - obtaining.

The pip cards are said to represent actions, thoughts and feelings that are experienced on a daily basis. I do like that way that the numbers are defined. Aces are "There's a first time for everything." Two;s are "It takes two." Three's are "Having a plan." Four's are "Making it happen." Five's are "Challenging yourself." Six's are "Keeping it going." Seven's are "Going deeper." Eight's are "The efficiency expert." Nine's are "You deserve it." Ten's are "Enough already."

There are no divinatory spreads presented. In the section on reading the cards, Bursten advises the reader to "adopt a flexible and experimental attitude", as well as allowing ones intuitive processes to unfold.

The cards themselves are approximately 2 5/8" by 4 3/4", and of good quality, sturdy, glossy card stock. The backs show a 1/4" black border, with the inset using a red background covered with a gold leaf pattern. It would not be possible to tell if the cards were drawn upright or reversed.

The imagery in the Marseille deck is much older than that in most decks. Here we see the Fool walking across flat land, with no precipice, facing the right hand side of the card. The High Priestess is holding her book in both hands in her lap, and there is no writing on it. The Emperor is shown with his right leg crossed over the left, forming a triangle. The Wheel of Fortune shows three animals - the top one wearing a crown. Death is clearly the "Grim Reaper", showing a skeleton walking across the ground, scythe in hand. Out of the ground we see heads, hands and feet "coming up", or perhaps "being born". Temperance is dressed in red and blue, but stand firmly on land, with no water visible, except for that which she pours between two jugs.

The pips are not illustrated, except the use of the suit symbols. The background for each suit is distinctive: light green for Staves, light rose for Chalices, light blue for Swords, light yellow for Pentacles. The Two of Chalices is unique, in that the bottom quarter of the card shows and icon with a large "C" on one side, and a large "B" on the other side. Each of the Knaves are walking, each of the Knights are riding a horse, each of the Queens are seated, and each of the Kings are seated. the Two of Pentacles shows a ribbon reading "Claude.Burdel.Cartier.Et Graveur.1751". The odd numbered Swords (1,3,5,7,9) show one straight sword, with the remaining swords paired off and curved. The Ten of Swords shows four pairs of curved swords with two straight swords crossing tips in the center of the card.

The illustrations have been recolored (newly colored) to great effect. Lee Bursten's text is way beyond what one has come to expect from a pamphlet of this size. His work is outstanding (as anyone who has Ciro Marchetti's "Tarot of Dreams", for which Lee Bursten did the companion text, will know), and he presents some innovative ideas with his treatment of the Pips and Court cards. This deck could easily be used by readers from all levels of experience. I highly recommend it also for the nicely written explanation of the 3 X 7 pattern for the Trumps. The one snafu? Lee's name is misspelled, in bold type, on the back of the LWB!

"Behind the simplicity of these images is a profound and ancient knowledge that is expressed through the language of symbols."

The Universal Marseille is a deck in the historical European tradition known as the ĹMarseilleĺ or ĹMarseillesĺ Tarot, and is a new 78-card edition of the Burdel Marseille deck variant from 1751. Itĺs newly recoloured, but retains the original line-work as it appeared in the eighteenth-century deck by Swiss card-maker Claude Burdel ľ this is not an updated or Ĺrestoredĺ Marseilles with extra symbolism based on the authorĺs research or theories, but one with the original eighteenth century imagery and symbolism.

The added colouring is pleasant to look at, reminiscent of the bold simple hues of old woodcut prints, but with a softer wash behind. The card images have thick black line-work, filled in with a rendered, smooth blend of colour. The shades used arenĺt at all outlandish, usually strong primary blues, yellows darkish orange-reds for the scenes and figures and a washed watercolour background in paler, not quite pastel, hues. There is also some shading in the colouration, over the line-shading, that gives depth to the image.

The suits used on the cards themselves are (in English) Staves, Cups, Swords and Pentacles. The last is also referred to as Coins in the booklet, which is also more historically accurate. (The name change to Pentacles was a Waite alteration in the early twentieth century and seems a strange choice for a historical Marseille deck). The outer white border on the faces of the cards also contains titles in five other European languages on the trumps and court cards; while the numbered suit cards have numerals as part of the tarot image, and not in the border. The backs of the cards are medieval tapestry-like designs, in red and beige with a black outer border.

The small companion booklet has been written by Lee Bursten (co-creator of the Gay Tarot and the Tarot of Dreams) in his straightforward, knowledgeable, and clear writing style. He introduces the Marseilles in factual and simple terms, telling us what it is (a type, or pattern, of imagery that encompasses many decks since the 17th century), what it was used for (gaming, for most of its history), and what it looks like (plain woodcuts). In its later history, the Marseilles also began to be used for occult purposes. Today, ôThe Marseille Tarot presents us with two faces: as a commonplace part of everyday life on the one hand, and as an object of philosophical and spiritual study on the other.ö

The divinatory meanings for the trumps in the booklet are derived from the history of the images, and ôwhat they might have meant to the average person in the 15th through 17th centuriesö when the deck evolved. There are no individual meanings for the lesser cards, instead explanations of the suits, court cards, and pips, leaving interpretation to come from combining the number and the suit meaning; quite a common way of interpreting the non-scenic cards of Marseille-type decks.

The Fool. Foolishness. Nonconformity. Devout. Humor which illuminates a situation. Unexpected good advice.
The Hanged Man. Betrayal. Being discovered doing something unethical. Being accused of something, rightly or wrongly. Being made an example of. Being embarrassed. Voluntarily submitting to public humiliation.
Swords: Defending. Self-defense and setting boundaries. Think of drawing a line in the sand with a sword point.
Five. Challenging yourself. A monkey wrench. Things donĺt go as expected and youĺre challenged to grow. Or you may be deliberately challenging yourself.


Despite the Marseille style of Tarot being still the most well-known type of deck in Europe, with several different editions and variations available ľ recoloured, restored, improved, and even in modern costume, it has been harder to find a Marseille deck, and still harder to research it, in English-speaking countries. The Universal Marseille is noteworthy because it is one of the more attractive variants, in my opinion, but mostly because of the companion material.

Along with the small companion booklet, there will also be a full book to accompany the Universal Marseilles Tarot by Lee Bursten coming later in the year. This, to my knowledge, will be one of the first books in English to concentrate solely on the Marseilles and its meanings ľ a long-awaited and well-needed event!