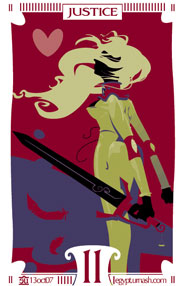 The Urnash Tarot is a modern deck of vivid colours, science fiction imagery and kinetic shapes. The deck has five new pip cards and two variants of a major arcana card, bringing the total to 85 cards in the deck. It was available in a self-published edition which is now sold out, but there's also a new edition from Lo Scarabeo. 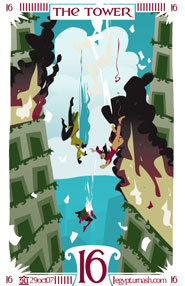 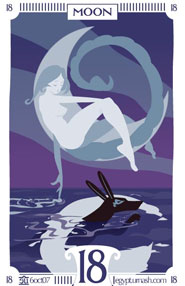 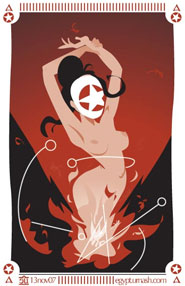 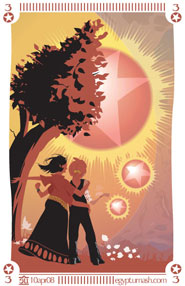 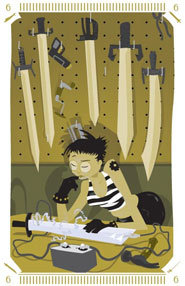 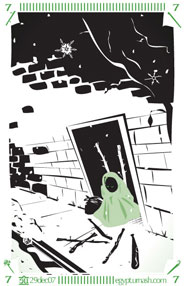 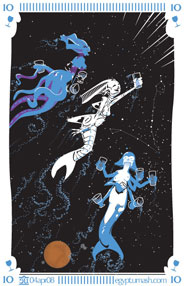 My Limited Edition Silicon Dawn Tarot arrived today! It was created by Egypt Urnash. More info on the creation of the deck can be found here in the Deck Creation board on the Aeclectic Tarot Forum.

Apparently, I have #11. (At least that's the number on the bottom of the box and on the title card.) Per Egypt, there's no maximum number of these limited edition decks being made. She'll continue to make them as long as there's demand and/or as long as she feels like making them. So I may have #11 of 1000 or #11 out of 11.

Right now, Egypt is looking for a publisher for the deck, so the only way to get one is directly from her. She gives you lots of options when you place the order. I chose the large format cards with the Majors labeled and numbered and backs that were purply swirly. Unfortunately, Egypt couldn't find something that fit the bill, so I got different backs instead.

The cards arrive in a tuck box wrapped in a ribbon. The tuck box itself is pretty flimsy, but this is one deck that deserves a specially made box for it anyway. The art on the front and back of the box doesn't appear anywhere in the deck.

The backs are a traveling flower/vine pattern in red, blue and brown on a brown diagonal cross-hatch pattern. It's a little staid for such a dynamic deck, but I don't hate it.

First impression of the cards - the fronts don't appear to be laminated, but the backs are because they're covered with wrapping paper. The cards themselves are 82mm x 127mm (~ 3.25" x 5"). The cards feel a little thin, but that could be because of the lack of lamination on the fronts. History (numbered X as opposed to 10) is the first card underneath the Title Card. There is a Cheat Sheet behind the cards that associates names with pictures for the Majors (since they can be ordered without name or number) and keywords for the Minors.

Of the Majors, my immediate favorites are History, High Priest, Justice, and the Moon. Strength is called Fortitude in this deck and it's numbered 8. Justice is number 11. While most of the characters depicted in the Majors have 2 arms, some have 4 or 6 arms. Many "traditionally" male cards are female in this deck: Fool (of which there will be a total of 3 in the guises of Maiden, Mother and Crone, but only the Crone is currently available), Magician, Lovers (which shows three ostensibly female characters but no males), Chariot, Hermit, what would be the "Hanged Man" is by design untitled in this deck and is a woman, Death, Devil, Sun and Judgement. One other word about the Majors - every card is a different color, there's lots of color and some of the color is rather bright. (I love all those things about the cards, but others may be put off by them.)

There is a special card numbered 0 that is not the Fool, which is by design unnumbered. This card is Chaos, which is almost entirely black except for a butterfly and a little rainbow colored streamer in the upper right hand corner of the card.

The Minors all have the same basic color scheme. The cards all have number and suit symbol in each of the four corners, but the suit name doesn't appear anywhere on any of the cards. Cups are blues, Swords are yellows and golds, Pentacles are oranges and reds, and Wands are greens. (Elementally, Wands and Pentacles are "mostly" switched in this deck.) The Court ranks are Prince(ss), Cavalier, King and Queen in that order. The Minors are apparently Thoth based judging by this sentence on the Cheat Sheet - "For greater detail, swap Wands with Pentacles (mostly) and consult Mathers' Book T or Crowley's Book of Thoth."

My favorite Minors just in terms of imagery are 7 Cups (we've all been there and/or know someone who has!), 2 Swords (she is about to mess him up!), 99 Pentacles (it's just such a fun card) and 10 Wands (just visually stunning). The more disturbing Minors are 3 Swords, 4 Swords, 5 Swords, 9 Swords and 8 Wands.

If it hasn't sunk in yet, there are extra cards in this deck! In addition to the two extra Fools and History (25 Majors), there are four 99s, Chaos and a Void Court. Once those are completed, they will be shipped to me.

The author's blog is the closest thing to a LWB right now until she finishes writing the companion book for the deck. I honestly don't remember if that will also come when it's completed or if I have to purchase that separately.

I'm going to have to find a different way of shuffling these cards too. I flexed one card to see how sturdy it was and now there's a slight crease line on the back of the card where the wrapping paper separated from the card. I can't really feel it, but I can see it from the proper angle. The front of the card is undamaged though.

All in all, I'm happy with the deck. It was worth what I paid for it.