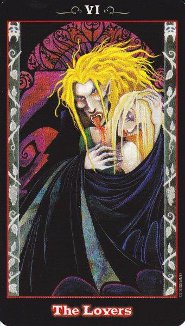 It almost seems like Tim Burton helped with the Vampire Tarot. Full of elegant vampires, bloodied fangs, full moons and desolate landscapes, it's refined and only slightly macabre.


Card Images from the Vampire Tarot 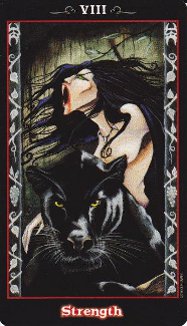 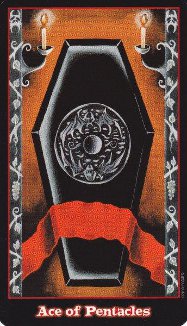 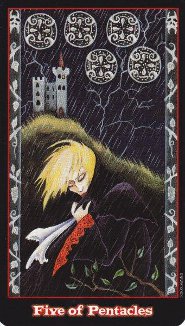 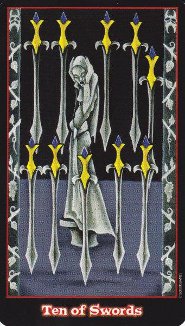 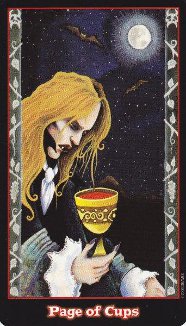 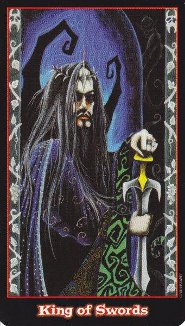 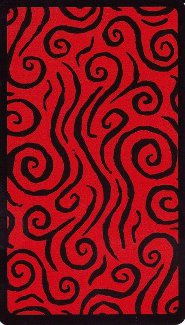 I purchased this deck on a whim because the beautiful artwork was completely irresistible. Hertz's dark and brooding but beautiful characters HAD to come home with me, though I doubted I would ever use this deck in a reading. After examining it further, however, I am quite pleased with my spontaneous buy. It seems to be a rather accurate, if sometimes humorously gruesome deck.

Many of the cards in this deck draw on familiar images from standard decks such as the Rider-Waite, yet still hold their own in artistic expression. The High Priestess, for example, has on her familiar Hathor-like crown of glory, but it is formed from her hair, seeming to indicate this position is from her own achievement, not one bestowed upon her. The Strength card depicts a woman with her typical enormous feline companion, but it is the woman who is wild and needs taming. Two other examples of standard card depictions are the Tower and the Chariot, and I must confess the Vampire Tarot version of these cards are my favorite renditions from any decks I've worked with or seen.

Virtually all of the Major Arcana cards show the central character standing in front of a mandala like backdrop, or are "framed" by some other means. Because one of the purposes of mandalas is to aid in meditation, I suspect Hertz uses these "halos" around her characters as a way to help the reader reach into the subconscious when confronted with these cards. Though most of the Major Arcana cards lack extra images and symbolism, the evocative and powerful central characters seem to warrant this.

Hertz's artwork throughout the deck is both dark and romantic. Her colors are deep and vivid, and her characters both frightening and comical. The emotional charge behind many of these cards makes me swear I know some of these people, ummm... beings. The Minor Arcana cards are equally lovely, and while I first favored the suit of Pentacles, the more I examine the cards, the more information I pick up from the other suits. (I am completely in love with the Knight of Cups. Look him up, you'll see why.)

Surrounding all of her powerfully illustrated cards is a border that is reminiscent of rod iron fencing, perhaps inspired by something from a cemetery she came across. In the border are realities of death, as displayed in her skulls, and the promise of life represented by blooming vines and bunches of grapes. The backs of the cards are appropriately deep red with black borders and black spirals, symbolizing the blood hunt at the dark of night. To create her deck Nathalie implemented metallic inks, fabric and unusual paper into her paintings.

This deck is not only for the eyes, however. Since we all have dark sides, and skeletons in our closets, this may be the perfect deck to use when confronting difficult and dark issues. While the Justice card in most decks is righteous, honorable and regal, the Justice in this deck scares the bejeebers out of me! But perhaps that is the point. The whole theme of this deck is a look into the darker world, the world of Vampires. If I, or someone I loved, were threatened in any way, you'd bet I could become the Justice depicted here. She conveys a power and fierce strength that few people are willing to acknowledge they have. And though the pictures in this deck deal with the most base of human issues - survival - there is an honesty about Nathalie's creatures that many of us have lost. They are unashamedly themselves, with no apologies offered. Taking a step into the world of Natalie Hertz's vampires could oddly enough reveal a more human you.

Choosing a Tarot deck these days is a very personal thing, not least because there are so many choices available. In this tradition of choice, Nathalie Hertz (2000) has created a Tarot deck to cater for a very specific audience: the lover of vampires and all things dark. Let me hasten to say that these people are probably not the only ones who would enjoy the deck. In fact, the sheer artistic beauty would certainly seduce more than a few souls. One might for example choose the Vampire Tarot for its dark, yet beautiful atmosphere, or indeed the gorgeous artwork that largely adheres to the Rider-Waite tradition. I was for example particularly delighted to receive my Vampire Tarot deck because of my obsession with vampires and horror, which has become a lifetime commitment.

The artwork is organized in a unique way, which integrates the fantasy of the vampire with the meaning of each card. The Major Arcana for example each features one or more vampiric individuals. My favorites among these include I The Magician, XVII The Star and XIX The Sun. The Strength card, another favorite, is numbered VIII, while Justice is XI.

The Sun is interesting because, as we know, vampires do not survive sunlight. Yet, the Sun is one of the most positive cards in the deck. Ms. Hertz works her way around this in a very creative way. The card shows a vampire whose arms and head are thrown back in what can only be described as the “ecstasy of agony”. To his back is a stone figure covering its eyes against the rays of the sun, which dominates the card with its brightness. The card is therefore an integration of the traditional sense of the joy and prosperity of tradition, while at the same time showing the danger the sun holds for vampires. For me, this card is the most passionate of the 78 in the deck.

The Minor Arcana are interesting in that each Suit follows a different pattern. The Pentacles, like the Major Arcana, feature pictures of vampires in different poses to suggest the card meanings, with pentacle diagrams at the top of these depictions. The Wand suite is dominated by wands, with vampire figures enclosed in golden frames at the top. The Cup suite features cups filled with blood, turned upside down, or on their sides with blood spilled out, without any vampire figures included. This suite is significant for its major vampiric element, blood. The Sword suite is decorated with, of course, swords enclosing vampires that appear statuesque – carved entirely from stone.

I have never come upon such an intriguing and inspiring deck. It is my favorite, and I use it constantly. The Vampires have become my friends. I can consult them on anything from the wisdom of a financial venture to the well-being of my family. Of course they don’t always tell me what I want to hear, but they do always tell me what I need to know. For this, I love them.

I highly recommend this deck for those who are passionate about dark literary and fantasy figures such as vampires. Those who are intrigued by the unusual and the visually beautiful will also find this deck very appealing, if only for collection purposes.