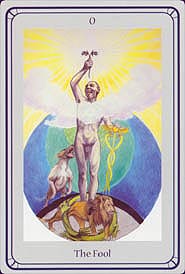 The Via Tarot is directly inspired by Aleister Crowley's Thoth Tarot deck, and draws on kabbalistic, alchemistic and magical sources. The Via's cards, illustrated in coloured pencil, resemble the Thoth's but are more aesthetically pleasing.


Card Images from the Via Tarot 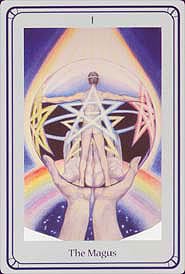 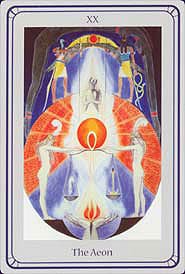 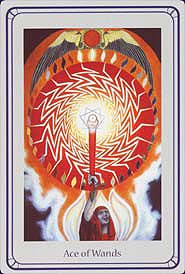 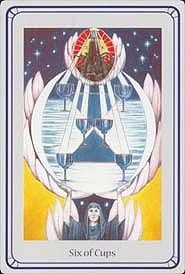 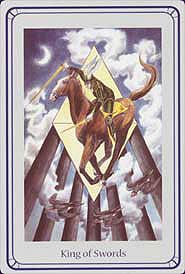 The Via Tarot is a Thoth based Tarot pack created by internationally known artist Susan Jameson. Ms. Jameson used colored pencil in her creation of this deck instead of her usual mezzotint, oils, or watercolor, for which she is so famous.

Generally, creators of Tarot decks will be artists who try their hand at developing a deck for a specific audience, have an idea or desire for the creation of a specific deck, or may possibly commissioned to create a deck for a particular person or group, as with the Golden Dawn Magical Tarot.

Ms. Jameson, however, began this project with the reception of a visionary dream and through a series of ‘channeling’ or ‘scryings’ received the images for the Major trumps from entities specifically identified as the Daughters of Light and the Daughters of the Daughters of Light. These entities are found on the Minors or pips as will be discussed later. The images received by Ms. Jameson during these sessions were seen as small bubbles of light which would slowly be revealed over time as the full image of a given card. Further, each Minor includes at the top of the card an inset lozenge, or medallion, which had originally been included in A. Crowley’s descriptions of his Minors. When his Thoth deck was painted by Lady Frieda Harris these small insets were left out.

Published by Urania, a division of A. G. Mueller, the cards are packaged in a strong plastic book type case. Upon opening the case the 167 page LWB, which is really a small 4 by 7 inch book, lies snugly in its fitted well. The cards reside under the book in a card well. Excellent packaging and a method I wish more publishers would use. The cards are 3 ľ by 5 ˝ inches making it difficult for small hands to handle them. The upside to their size is the ease with which one can see the detail within the card image. The card stock is somewhat thin but seems to be strong enough to hold up to continual usage. The book details Ms. Jameson’s reception of the card images and briefly explains the connection of the Tarot to the Qabalah.

Each of the card explanation pages has a black and white scan of the card with the card meaning on the opposing page for the Majors and Courts and underneath the card image for the Minors. This is an excellent way to design a LWB making it very easy to find the card meaning with the scans included. The explanations are detailed enough so that the image is well-understood as some of them are absolutely striking in their difference from the norm.

On the backs of the cards the four tetramorphs of the world card occupy their respective corners with white wings behind each. The wings form a somewhat circular opening that has a blue background. A thin white line forms a circle on the background and within this circle is a black equal-armed cross of substantial width. In the center of the cross is a red rose with a yellow center and six equally spaced small green leaves around its outside petals. Surrounding the rose is a Heptagram in white. A reversed card would be noticed by the client so these cards are meant to be read in the upright position only.

The card face is a light gray background. There is a 3/16 inch border followed by a frame of two black lines, the outer slightly wider than the inner and 1/8 inch apart. Within the black frame there is another Ľ inch gray border on the top and both sides while the bottom border is 7/16 inch to allow for the card titles. The image resides within this inner gray border and occupies the majority of the card face. The Majors have their titles at the bottom of the card with their number in Roman Numerals at the top. The Minors are identified at the bottom of each card.

Where A. Crowley’s Thoth deck has an ‘in your face’ energy with sharp lines and dynamic color, Ms. Jameson’s images are softer, yet clear and vibrant. The depth of information is incredible; however, many of the Majors have a completely new, updated look for today’s world and our spiritually enlightened views.

As a practicing Tarot professional, there are certain cards that I am drawn to. I judge these cards as to how my clients would react to them during a reading and the impact the image would have versus my interpretation of the card interactions within the reading. One of the first cards I look at is the Devil, major Trump XV. Here Ms. Jameson has made a radical departure from the usual design. The Via Tarot shows an elongated, sun-bleached goat skull attached to a column rising from the ground with bones scattered about in the foreground. The skull has an open and living eye in the third eye position. The twisting horns rise up to the upper corners of the picture image and within this triangular area is a blazing sun. The effect here reflects the tremendous will to life that we possess, even in the most challenging and sometimes frightening situations. As the book states…”This card is an enigma, full of apparent contradiction, which lends itself more to open-minded meditation than to detailed analysis.” It is here that I find more to work with in a card so often viewed by clients with chilling effect.

Another masterful touch in its re-working is the Tower, or in the Via Tarot, The House of God. A large and dynamic eye within an Omega symbol tops the card and from the eye issue 15 visible rays. The central ray pierces the tower through the middle and appears to be both a cross and a sword. On either side of the tower fly two large white doves while three more fly within and above the arch of the tower. The red and yellow colors used on this card fairly shout of the power of Mars and the energy contained within the image. Qabalistic references are found throughout all of the Major Arcana for those who are familiar with those symbols from the OGD.

The Court cards are very reflective of those by A Crowley. Anyone familiar with his designs will see his influence in the Court personalities. The one change Ms. Jameson made was to go with a more usual ranking of King, Queen, Prince, Princess. This will allow for an easier transition from a Waite/Smith style deck. The Court personalities are defined with their Zodical decans as well as their elemental attributions. There is a sense of controlled power within the Court cards that belies the softness of the colored pencil used in their creation. They are really quite remarkable!

Now on to the Minor Arcana, or pips. The usual suit attributions are Wands, Swords, Cups, and Disks. Here Ms. Jameson painted the images much like she saw them during her scrying and meditations: as bubbles of light. At the bottom of each image is one of the Daughters of Light holding up a sphere. Within this circular area resides the requisite number of the appropriate element. At the top of the card image is the lozenge or medallion which indicates the astrological connection of the particular card. The Five of Wands, for example, has a red sphere held up by one of the Daughters, flames issuing from behind her, and the five wands crossing to form a reversed pentacle. The background is dark gray to black with a corona of orange surrounding the red circle. In the medallion is a lion with a dark coin in its mouth and on the coin is the astrological glyph for the planet Saturn; thus, astrologically the Five of Wands is attributed to Saturn in Leo.

Each of the Minors is done with care and the intensity of the image is truly awesome. Yet, the ‘bubble motif’ is somewhat tiresome and I find they become quite boring. However, the designs clearly state the intent of the card and the application of its energy to the question at hand making them easy to read.

I would not say that this is an Enochian deck due to the Daughters of Light as its source, but fundamentally Thelemeic in its design and expression. This is the only deck that I have ever heard of that was created by scrying over a period of 2 years therefore much credit must be given to Ms. Jameson for her dedication to this project. She is an active member of the OTO and dedicated to her craft.

Overall, this is an awesome redesign of the venerable Crowley/Harris Thoth deck and although there is some nudity in the Majors it should not be found objectionable. Thoth purists may complain but in many ways this deck aligns itself with current thought and spirituality. The Tarot is an ever-changing, living tradition. When it fails to change, it will die. This is not a deck that I would recommend for a beginner. If someone is interested in the Qabalah and its connections to the Tarot this deck has enough imagery to satisfy their needs. The Via Tarot will excel when used for deep readings, meditation and spiritual growth, and yes, Tarot magick.