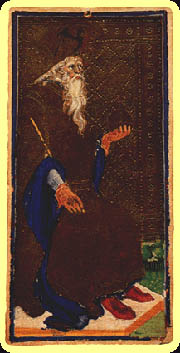 A reproduction of 74 tarot cards that were painted in the fifteenth century, the scenes in the Visconti-Sforza Tarot are authentically medieval. The cards are not titled (there is no text on the cards at all), and four cards have been recreated to make the full 78-card deck.


Card Images from the Visconti-Sforza Tarot 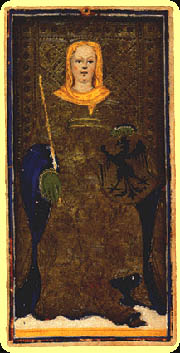 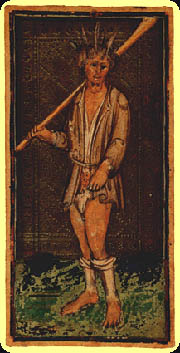 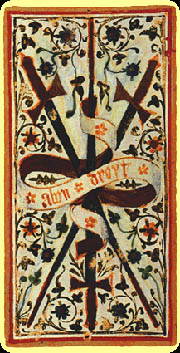 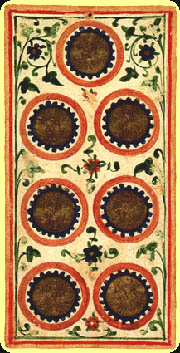 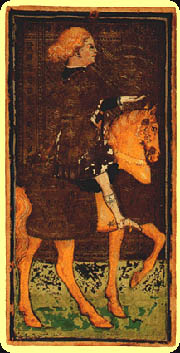 [Note: this is a review of the Visconti-Sforza Pierpoint Morgan variation.]

I'm sure we're all aware of the Visconti Gold tarot with the foil reproduced by A. Atanassov, but it is the Visconti Sforza Pierpoint Morgan truly sets the standards and the origin of the past and present tarot cards.

There is no wishful thinking of so-called Occultic mysteries and attempts to find shallow relevances to Egyptian, Indian, Gypsy-Atlantean tradition etc. These cards were the first "official" tarot card deck made, and it sets the standard and the original look of our modern decks. They were made NOT for divination or mystical goals, but for simple gambling. (Not to be confused with the French Gringonneur deck of playing cards at the court of Charles in 1392).

These beautiful cards are larger than the size of our modern tarot, simply because the medieval necessity of fancy decorations sorrounded that weighs more than convenient shuffling. A hole has been punched in all cards, and two of the cards (Tower and Devil) were added in the modern reproduction. However, it is quite possible that both missing cards were never there in the first place, due to the religious and political controversy that surrounds these gambling cards. By taking historically comparing these late 15th century cards to modern cards, one is able to appreciate the beauty and changes in detail that has been embedded in many of our modern tarot cards. Such as the Fool, that later tarot decks added a sun; the Hermit, has been replaced from holding an hourglass to a lantern; Coins became the Neo-Pagan pentacles; batons served as magical wands. Temperance was originally a female pouring water from one vase to another, yet became a nude female pouring waters to both sea and land in modern decks, and so on.

The cards have no titles, no numerical alphabetical allegories (since Comte De Mellet first established the infamous 22 Hebrew letters to the tarot, not Eliphas Levi), which makes their outlook more authentic, yet may be more complicated for a tarot beginner. Their background is a simple reddish brown/maroon color, and they must be shuffled from the sides rather than the top for convenience. In my opinion, these are the "true" and original tarot that many of us may be looking for. They set the standards and values to modern tarot decks and their designs.

The "Visconti Sforza - Pierpont Morgan" deck is a reproduction, in authentic color tones, from the most nearly complete existing Visconti-Sforza tarocchi deck, dating from mid-fifteenth century Milan. I found this to be an astounding deck, and one that I automatically viewed with reverence. To "see" the history that the Tarot world so delights in discussing takes it out of the realm of discussion and into the realm of reality. It is an "Aha!" experience of unimaginable magnitude.

The LWB (Little White Book) that accompanies this deck is interesting in and of itself, as it is formatted to match the size of the cards - which are outsized, long and narrow. In his introduction, Stuart Kaplan gives a short synopsis of Tarot history in Italy from the mid-sixteenth century. Included in the explanations for the Major Arcana, suits and Court cards are charts showing the card/suit title in English, French and Italian, as well as the established number sequence (with the Fool being unnumbered, Justice as VIII and Strength as XI), and playing card correspondences for the suits.

One part of the LWB that I found to be unique, and quite informative, was the section on the Visconti and Sforza family heraldic devices, which included information on the two families. The five devices discussed for the Visconti family are the bird, the ducal crown, the sun, the black eagle and the motto; the two devices discussed for the Sforza family are the lion and three interlocking diamond rings.

Each card is presented with a small black and white scan, a discussion of the card (including a discussion of elements within the card), upright and reversed divinatory meanings.

Kaplan describes the background for the Major Arcana is a decorative, rectangular panel, with a border containing a pattern of repetitive tooled dots - generally seven dots in a circle and one dot in the center. The border surrounds an overall gold background with repeating suns with eight wavy rays, within a diamond or lozenge shaped pattern.

The Minor Arcana Pips are drawn Marseilles style - with representations of the suit only, with no illustrations. The background for the Pips is vines and flowers. There are no titles, numbers, or suit names on any of the cards.

I found the Major Arcana to be of most interest in this deck, as they represent one of the first Tarot decks ever produced. From these cards we can see where the changes came on through the years. Here we see the Fool facing us directly, without his purse and faithful companion. The Magician we see seated before his table, the High Priestess is seated, book in hand, but there are no pillars. The Empress shows the a seated figure with a shield in one hand, the Emperor holds a globe in his left hand and a scepter in his right hand. The Hierophant is a solo figure, with his right hand raised to give the sign of the blessing. The Lovers shows a male and a female figure, with a blindfolded, winged Cupid above them.

The Chariot is drawn by two winged white horses, while Justice shows a female figure, seated, with the scales of justice in her left hand, and a sword in her right hand. Above her rides a figure in full body armor, carrying an upraised sword. The Hermit wears a two-tiered hat, and carries an hour-glass in his right hand, with a staff in his left hand.

The Wheel of Fortune is one of my favorite cards, showing a blindfolded female figure standing in the center of a wheel, with figures riding the outside of the wheel. The wheel rests on the back of a male figure with long white hair and beard, wearing a white robe. Strength shows a male figure, holding a club over his head, with a lion at his feet. The interpretation here is that both the man and the lion are poised to strike at a common enemy. The Hanged Man appears much the same as in later decks - hanging from one foot, with the other foot crossed behind his leg and his hands behind his back.

Death shows a very tall skeleton, with a bow in his left hand and a thin arrow feathered at the top in his right hand. Temperance shows a female figure pouring liquid from one ornate ceramic urn into another. The Devil shows two small figures, half human and half animal, in chains. The Devil is half animal, half female, winged, with horns and asses ears. The left hand of the Devil appears to be making a sign, with the right hand holding a rod that appears to have a hand at the end of it.

The Tower is very similar to the current Tower card, and was the second card missing from the original deck, and having to be reproduced. It shows figures falling from a tower, with a blazing red sun (the LWB says red, the card shows purple!) in the upper right hand corner, with scalloped rays - one of which has hit the tower and split the tower top from the stone battlement.

The Star shows a female figure reaching up to touch an eight rayed star. The Moon shows a female figure standing, with a crescent moon in her right hand, with a broken arrow in her left hand. The Sun shows a winged child, his right foot standing on a blue cloud, with both hands holding aloft a radiant human head resembling the color of blood. Judgment shows a god-like figure at the top of the card, with a sword in his right hand and a globe topped with a cross in his left hand. Two angels blowing trumpets that carry banners are depicted in front of Judgment. The World shows two naked children appearing to point to (or perhaps be supporting) a large circular object, within which is a vision of a heavenly walled city floating on turbulent waters.

For anyone wanting to understand the history of Tarot, or interested in the art background of early Tarot decks, this is a must have deck. The LWB that accompanies the deck provides an incredible amount of information in a very small amount of space. For this we all owe a debt of gratitude to Stuart Kaplan. This is a deck that lends itself to readings, journeying, meditation and ritual work.