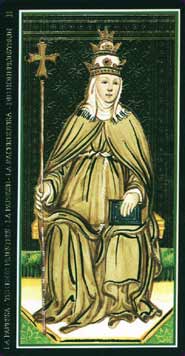 A restoration of one of the oldest tarots, the Visconti-Sforza cards. The symbolism is the same in this version, but the Visconti Tarot cards have clearer colours and there are metallic gold leaf highlights and backgrounds. (The gold doesn't show up well in scans, unfortunately.)


Card Images from the Visconti Tarot 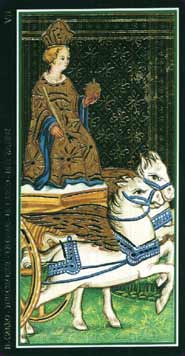 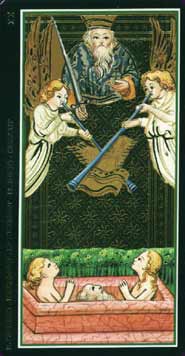 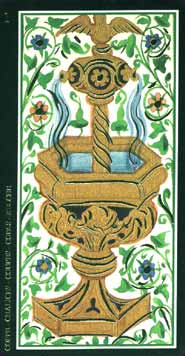 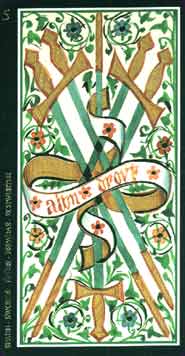 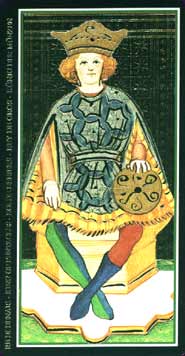 I am pleased to see this version of the Visconti Gold from Lo Scarabeo. Mark Filpas in Pasteboard Masquerade made a reference to an upcoming book and deck set by Lo Scarabeo with an even newer tower and devil card and a book by G. Berti. He was referring to the Italian title of Tarocchi dei Visconti, which arrived in its English version on American shelves in September 2002. Someone who bought the Visconti Gold when it first came out in 2000 or 2001 may ask me, is this a significantly different deck?

For me, it is. What I like least is probably a minor complaint and is one significant difference. The backs are actually the less-than-ideal color of funny yellowish green---but you might like the different color. I compared the 2002 cards to a 2001 edition and found the lines of the gold stamping to be slightly thicker and longer in the newer cards.

The first and second things that I like most about the new deck includes the newer Devil and Tower cards, not pictured anywhere so far. The devil and tower in Mark Filpas' 2000 review of the deck is NOT the newest version by Atanassov.

One of the top selling points to me is a very good book discussing the Visconti images. I believe it very good because it clears up my questions of Lo Scarabeo's suggested meanings that I've seen over the years. Lo Scarabeo titles in the Tarocchi d'Arte series still have the cards or booklets with the old meanings. Mary Greer's book on reading reversals give glimpses of traditional divinatory meanings. But I now know more about the Italian iconography and ideas of the cards when I read the Lo Scarabeo book.

Stuart Kaplan's Encyclopedia of the Tarot or the U.S. Games versions of the Visconti decks (Pierpont Morgan and Cary Yale) may satisfy with their excellent commentary on tarot card variations and art history. Or you might have checked out Andy's Playing Cards, Tom Tadforlittle's Hermitage online. Other good resources include Brian William's Renaissance Tarot book or deck or his Minchiate set--these can be all you need to reference the history of the cards.

Myself, I want a little more information, from an Italian slant. This is where the book might give you a fun and different perspective. Giordarno Berti gives a nice introduction to the Visconti Tarot cards that is covered in some of the little white books of the newer Lo Scarabeo decks issued in the newer 2000 editions. However I have not seen another English version yet discussing the majors, minors and courts in the way that I found in Tiberio Gonard's portions of the text. This is where the new book shines for me.

He writes about the art of cartomancy and shows eight different spreads that I found useful for writing exercises and getting to know the cards in the deck. His discussion of the majors has a few historical examples and interesting ideas, covered in about two pages each for each card.

Gonard believes in general that the minors were historically of value in gambling games rather than divination, but he provides with each card at least half a page of ideas and meaning suggestions. The ideas might range from historical emblems in Italy to perhaps a similar symbol in Buddhism. As an adjunct resource, I find it adds to my mental ideas of the cards.

Overall I do recommend this book and deck set to historical fans. Some other people that I know have expressed a wish to use elegant and lovely reproductions of older decks such as the Visconti Gold for self-reflection and ideas as well. They don't have any idea how to use decks without scenes in the minor cards and the older meanings puzzle them. I've heard one of my favorite art historians might write that book someday---until he does, here's a resource that I'd like to recommend to others.

There are several different types of Visconti decks in current publication, all with close similarities but printed from different sheets of existing cards. This deck copies the Visconti-Sforza, cards of the Milanese tradition that were commissioned in the mid 15th century and extensively copied and reproduced in the Renaissance period, due to the simplicity and clarity of the designs. These are also the most complete of all the medieval card packs known today - 74 cards of the 78 still in existence. (Just the Devil, Tower, Knight of Pentacles and Three of Wands are missing and have been recreated to complete the deck.)

Visually, green and blue tones predominate in the art. People depicted in the majors are mostly pale and blonde, which the minors are decorated with green ivy and leaves around the pips. Lo Scarabeo has also set the tarot scenes onto metallic gold backgrounds, giving the cards a luxurious look. Some cards have short Latin mottos emblazoned on a banner wound around the suit elements, to emphasise the meaning.

The minors are of course pip cards, showing simply the number of suit elements arranged in a meaningful pattern. (I rarely read with decks with pip cards, preferring fully illustrated decks, but found when looking at these cards in a spread, it is easier to pick the majors from the minors, as they and the court cards stand out against a background of suit cards. This might mirror the importance of the cards - the spiritual and important life influences stand out from the mundane repetition of the everyday.)

The Visconti naturally differs from Rider-Waite style imagery, being several hundred years older. All the figures in the major arcana, or trumps as they are properly called, are static and stately. The Magician figure is a conjurer and doesn't carry the same sense of transformation; The High Priestess is simply an Abbess; The Pope (not the Hierophant) is alone and has no acolytes. The Hermit is based on Chronos, and carries an hourglass rather than the later addition of a lantern. Strength shows a man beating a lion, rather than a woman subduing one.

This set of cards is packaged with a useful companion book entitled 'Visconti Tarots'. It devotes several pages to setting straight the myths and legends to do with the origins or tarot cards in an unusually factual and historical manner. A section on the Art of Cartomancy is next, setting out how and why divination works, proper ethics for the diviner, and providing well-explained spreads for cartomancy and introspection. The bulk of the book studies the meanings of the major and minor arcana in by comparing historical fact and possible symbolic associations. Berti often mentions historical figures that the trumps may well have been based on and other historical titbits. However, it seems to me the author needed a lot more space to express his full ideas - the few paragraphs given to each card seem brief and sometimes inconclusive. The keywords given for divinatory meanings also occasionally don't seem supported by the information preceding them. (This leaves me wondering how these divinatory meanings come about, if they are Berti's associations or if they are older.)

Incredibly important as an artefact in the history of tarot, these cards are a mandatory addition to any collection, and the book-and-cards set is ideal for students of historical Tarot symbolism.