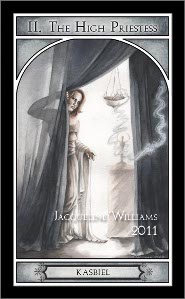 The Watcher Angel Tarot is based on part of the text from the Book of Enoch, drawing on the story of heavenly beings who abandoned heaven in pursuit of mortal love. It's a full deck of 78 cards and is now self-published. 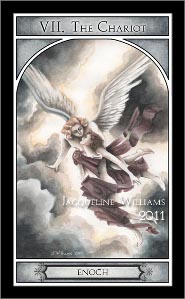 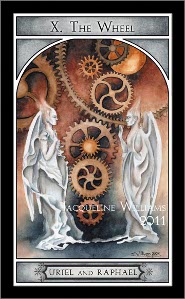 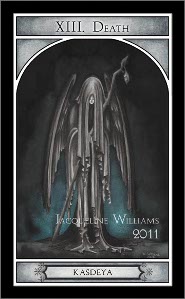 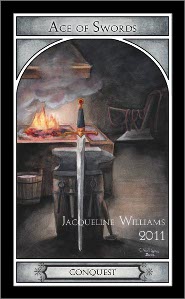 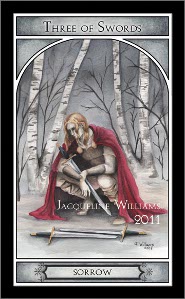 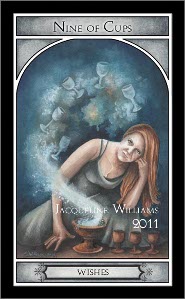 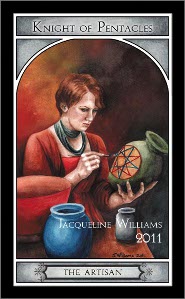 This is a review of “Watcher Angel Tarot” written by Michelle Belanger and illustrated by Jackie Williams.

In this deck all of the trumps have Angel representations. This deck was drawn largely from the “Book of Enoch” an ancient Jewish religious text, traditionally ascribed to Enoch the Great-Grandfather of Noah. Every card in the deck is fully illustrated.

The single word meanings that are printed on every card are appropriate and especially helpful to allow beginning readers to use this deck successfully. However the cards lend themselves to allow the reader to use their own intuition to flow freely and interpret the cards from the images so beautifully rendered in watercolor. Jackie Williams painted a full canvas portrait of each card to create this deck.

Justice is 11; Strength is 8. The backs allow for inverted readings although the LWB only gives the interpretations for the upright positions.

This deck is chock full of such beautiful cards it is hard to pick just a few to describe in detail as favorites, but here are my picks:

VII – The Chariot – Enoch – Enoch was transported to the heavens. Enoch taking his lover up into the clouds just emphasizes the card’s meaning of Triumph.

V – The Wheel – Uriel and Raphael – Revealed the course of the luminaries – Raphael starts the turning of the different sized gears. If you look closely at the complex drawing, you will see that Jackie took the time to paint them in the correct positions to actually turn correctly. It is a very accurate representation for Interconnected Cycles.

Nine of Swords – Nightmares – This is a card I look at closely in every tarot deck I get my hands on. In this deck, Jackie has painted what look like the equivalent of the dementors from the Harry Potter series of books by J.K. Rowling. For me there really has been nothing that captures terror better than those dementors. This card interprets itself even without the word at the bottom – Fear! Struggling with demons and anxiety just radiates from this card.

Eight of Wands – Movement – Since wands represent fire and energy, Jackie chose to show the suit of wands in a unique and non-traditional way - as swirling balls of force. This card is mesmerizing. The wand emits the force and the card shows one person levitating another. What better way to depict forces of movement and progression!

This has become one of my favorite and most accurate decks to read with.