Way of the Fool Tarot 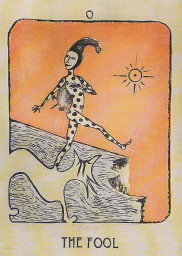 The Way of the Fool Tarot is a small-size reproduction of artist Beatriz Inglessis' much larger Japanese woodblock print project. This majors-only deck has been produced in a limited edition of 50 decks.


Card Images from the Way of the Fool Tarot 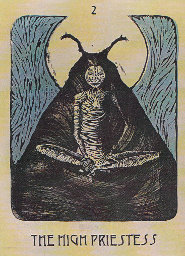 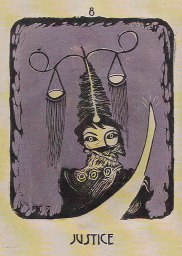 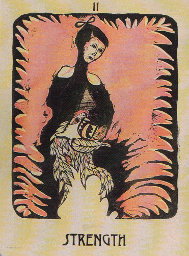 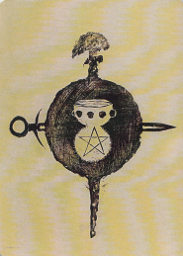 Way of the Fool Tarot Review by Bonnie Cehovet

Beatriz Inglessis is a native Venezuelan that is currently living and working in Tokyo, Japan. She is currently working on a Doctorate of Fine Arts at the Tokyo University of the Arts. “The Way of the Fool Tarot” is a 22 card Majors only, Limited Edition (50) deck, reproduced from her Japanese woodblock print project. They are 2 ˝” by 3 ˝”, which is a very nice size for small hands like mine. There are two extra cards with the deck – one contains the card information, and is signed and numbered, while the second card shows the card back on both sides, and may be used to balance the cards when displaying them.

The card backs carry the primary color of beige, with a darker circle in the center of the card, with a Sword and a Wand penetrating it. In the middle of the circle we see the icons for Pentacles and Cups. The card faces sow a Ľ” beige border, with the card number at the top in Roman numerals, and the card title along the bottom. The traditional names for the cards have been retained. There is a thin black border surrounding the image on each card.

The cards come in a gray cloth bag that folds over, and has a thin red cord that goes around it, with a small gold piece at the end. It has a very gracious look and feel to it. This is something that I find holds true with Indie authors/artists – they go out of their way to make presentation memorable and pleasurable!

If I had my way, I would be presenting all 22 of these cards! The reality is that I can only present a few. The Fool would be the first one that I would talk about. I love the simplicity – the gray cliff, the white animal companion in the foreground, and the Fool himself, about to walk off the cliff, as he looks backwards. It appears that he is carrying a backpack, rather than the typical wallet at the end of a stick. The sky is a vivid orange, with the sun noted in black outline in the upper right hand side of the card.

For me, the cards are minimalist, and they flow well. The archetypal energy of each card stands true, and they can be read with easily. There is excellent use of both space and color – nothing is overwhelming.


Complete Details of Way of the Fool Tarot


Similar Decks to Way of the Fool Tarot