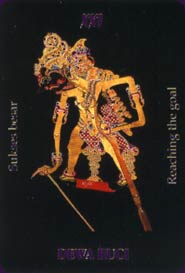 The Tarot Wayang is an unusual tarot based on wayang kulit, Indonesion shadow puppet performances, and designed to introduce tarot to an Indonesian audience.


Card Images from the Tarot Wayang 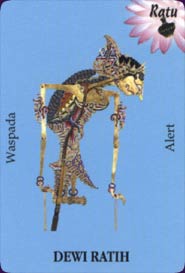 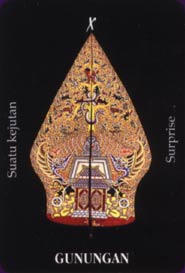 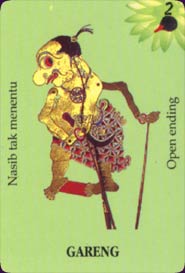 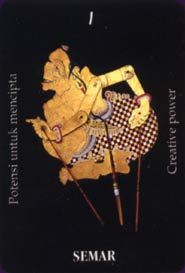 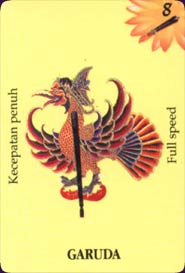 Picture this. You are in a small village somewhere in Indonesia. It is late in the evening and you are sitting on the ground. In the dark, a coconut oil lamp flickering behind a large white cloth screen stretched between wooden poles, casts the only light. From behind the cloth comes music performed by four musicians (the gendťr wayang) on xylophone-like instruments. You are at one of the frequent and ever-popular wayang kulit (shadow puppet) performances, on which the Tarot Wayang deck is based. More accurately, the Tarot Wayang beautifully depicts photographs of some of the characters/puppets (known as wayang) used in the shadow puppet plays.

In the actual wayang kulit, a dalang, or priest puppeteer, sits cross-legged behind the screen as he manipulates the flat, elaborately carved, painted, and jointed leather stick puppets. He and they enact one of the many stories from the great Hindu epics the Mahabharata and the Ramayana.

The dalang, a keeper of religious stories and sacred traditions, is a spiritual teacher with magical powers. He knows how to consecrate and bring the puppets alive for their performances. Every object, every article of clothing, and every move the puppets make have a symbolic significance. You are in the presence of a sacred and religious experience.

That said, if you are non-Balinese, you are totally unprepared for, and perplexed by, the uproarious laughter of the Balinese audience around you. In the wayang kulit, unlike in the original Indian epics, royalty of the Pandawa (the good guys in the Mahabharata) are accompanied by their loyal clown servants, who play a large role in the performance. They typically speak the local dialect and make fun of the silliness of the other characters, who speak more ancient dialects and are so stuffy and blind.

All the ponokawan (pono for clear, clever vision, kawan for companion), as these clown servants are collectively called, usually have ugly faces, disproportionate bodies, and often engage in socially inappropriate behavior. One of the most well-known ponokawan is Bagong with his squat body and big eyes. In this deck, he appears right away as The Fool.

Semar, Bagong's father and the father of royal clown servants Petruk (Nine of Coins) and Gareng (Two of Coins), serves as The Magician. A very fat man with a big belly and enormous buttocks, he sits comfortably and passes gas easily and readily. Yet, his white tufted hair indicates he is a wise man and a perfect meditator, and his one tooth tells us that he speaks only the truth.

In the Tarot Wayang deck, the wayang puppets representing the Major Arcana stand out against a black background. The name of each puppet/character appears in caps at the bottom of each plastic-coated card. The card's meaning is printed in Indonesian on the left side of the card, and English on the right. A chart accompanying the manual, written in both Indonesian and English, further identifies each of the characters and in a few words explains who he or she is.

Among the puppets representing Major Arcana cards, are:

The information-packed manual that accompanies the small (2 3/8" x 3 3/8") deck is designed to teach the basics of Tarot to the Indonesian people. It contains elementary chapters on the meanings of the cards, on using the Celtic Cross layout, dignities (called friendly and clashing elements), zodiacal associations, and procedures for reading the cards.

Alas, it fails to explain a great deal of the complicated symbolism of the puppet designs, so familiar to Indonesians and quite elusive to non-Indonesian Tarot readers. For instance, Samar and several other puppets all wear kampuh polong clothing, i.e., pieces of four-colored cloth that remind us of the need to harmonize different kinds of "lusts": anger (red), greed (yellow), and sloth (black). The white in the cloth represents lack of desire or desire mastered, holiness. I hope a subsequent book or pamphlet will do this.

Although absolutely delightful, this is not a deck to be taken lightly. Ani explained to me that it was important to spend some time meditating before using the cards in the deck. They are considered to contain supernatural energy, and so are not to be copied or otherwise used carelessly.