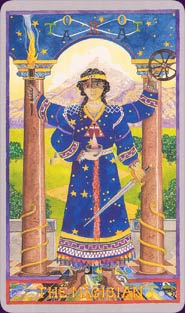 The Wheel of Change Tarot has beautifully painted, imaginative and colourful artwork on its 78 cards. It has multi-cultural, multi-ethnic, and modern imagery with an emphasis on nature and the natural world. It uses the Thoth tradition as a jumping-off point for the majors, though the minors are a more original system.


Card Images from the Wheel of Change Tarot 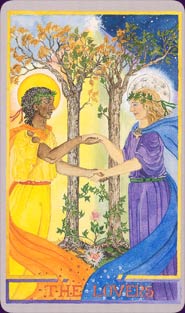 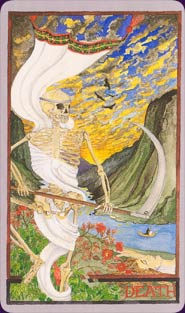 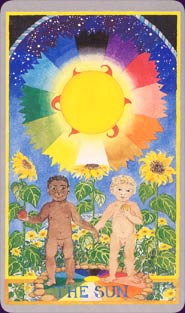 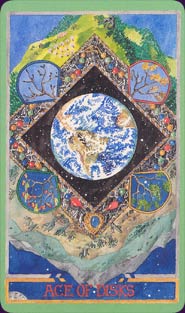 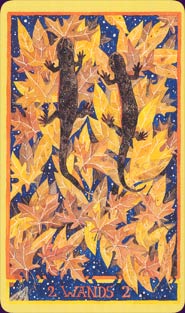 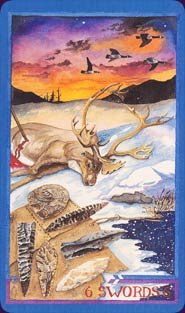 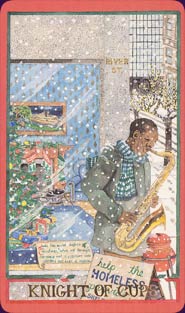 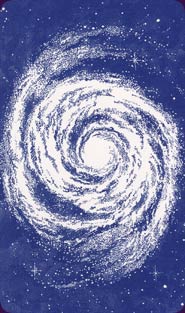 It’s not surprising that I found this Wheel of Change Tarot to be one of the best I’ve used. I connected previously with Alexandra Genetti’s art in the Artists Inner Vision Tarot. Alexandra’s art graces this deck, and she is also the author of the full-length and intricate book that accompanies it. In her book Alexandra says, "The goal of the Wheel of Change Tarot is to facilitate self-knowledge and sympathetic understanding of others and of the natural world of which we are a part."

This places her deck firmly in the realm of spirituality and personal growth, and as a tool for the development of these, rather than simply a divination tool. I found it to also be a very Pagan deck. The cards are resplendent with Pagan and Goddess-centric images and symbols and of course these are the images and symbols that speak most intimately to me. It is clear that Alexandra has given a great deal of consideration to the symbolism she has chosen for each card. For example:

The images are both traditional and contemporary. Many of the objects are commonplace, and used daily. I felt the use of contemporary symbols encouraged me to recognise the magick and spirituality in the everyday things around me.

Alexandra Genetti is a wonderful artist and her dedication to the spiritual tool of Tarot is clear. This deck and book and the insights with them are true gifts of the spirit. Enjoy this deck as a gallery of delights, a divination tool and a system of personal development and learning. It works on many levels.

The deck/book set for the "Wheel of Change" Tarot consists of 78 cards, accompanied by a 400 page, fully illustrated book. "Wheel of Change" was a ten year project in the making for artist/author Alexandra Genetti. It shows a Pagan orientation, and her deep reverence for the natural world and its inherent sense of balance.

Alexandra has chosen to stay with the traditional suits of Wands, Cups, Swords and Disks, while following the Thoth interpretation on the court cards. The Prince and the Princess represent youth and the "learning curve". The Knight and the Queen represent our adult selves in their highest, most confidant form. From "The Wheel of Change Tarot", page six:

"In the court system of the Thoth Tarot, the active Knight usurps the role of the Father King, and his addition makes the system a cycle of changes, moving like a wheel. The Knight embodies energy from outside the family pattern and represents, as Lancelot did, a new influence of the Queen, made manifest in the outer world as the Knight carries her off."

The cards themselves are absolutely wonderful! The backs are a blue base with a white swirling vortex - easy on the eyes for both the reader and the querent, non-offensive, and certainly representing the energy of this deck. The twenty-two cards of the Major Arcana are gray bordered, while each of the suits is bordered with a complimentary color: Wands are yellow, Cups are peach, Swords are blue and Disks are green. The cards are in a double outline: a fine border inside the card, surrounded by a quarter inch color border on the outside. My preference is for decks that are bordered, as opposed to decks that continue to the edge of the card, so "Wheel of Change" works well for me.

I cannot say enough about the book itself. Alexandra does a fantastic job of getting across the meaning for each card, and their numerous levels of interpretation. Since I am currently working on a numerical "map" for the Tarot, something akin to the Qabalistic Tree of Life map, I was fascinated by her presentation of the energy of the pips. It makes sense, and puts a new slant on how I see them.

Her presentation of spreads at the back of the book, as well as her short commentary on shapes, colors and symbols are all resources that will add depth to any reading. I have chosen to present one of her spreads here: a four card layout called "The Magical Triangle Reading". ("The Wheel of Change Tarot", page 326) This is a spread that is oriented towards clarification of a specific problem or situation. As a professional reader, as well as one who reads for themselves, this is an invaluble spread!

The manner in which this spread is set up interested me. Had I not read it, I would have shuffled all of the cards together, then drawn the cards in sequence. (Yes - I read instructions only when all else fails! LOL) The way that Alexandra presents this is to shuffle the cards, then place them in three piles. Decide which pile represents which of the first three cards, then select a card from that pile and place it in the appropriate position. Gather all of the remaining cards together, shuffle them and draw a final card for the outcome.

The cards that I drew were: Self - The Devil, Goal/Problem - Queen of Swords, Action To Be Taken - The Star, and Outcome - Eight of Wands. Since I do so many relationship readings, I arbitrarily defined the "issue" here as one of relationship. The querant is being asked to look at their part in the issue - to recognize what they are choosing to place in their lives and why. Alexandra's Devil is an interesting person - seated on a Goat, looking out towards the reader while he bangs his drum overhead. Nothing dire or scary here.

The Queen of Swords shows an oriental lady surrounded by much beauty and tranquility. The issue for the querant is to see their relationship(s) in a clear and concise light. In some manner, balance needs to be brought into the world of relationship.

The action to be taken involves the Star, which Alexandra portrays as a female figure standing in the midst of a whirling vortex with the light of the stars beaming down upon her. The querant has all of the creative potential of the universe at their command, and needs to boldly and confidently follow their intuitive thoughts and feelings.

Alexandra's Eight if Wands makes me want to play! We see eight small painter's brushes/pencils laying on a wheel of all colors (representing the eight stations of the year), from which marvelous energy in the form of a stream of yellow emanates. Lovely action here. The querant has the force and the energy to create whatever outcome they wish to see.

I find this deck to be extremely positive in nature, well depicted and accompanied by a well thought out, well written book. I would recommend this deck for any level of Tarot reader, and would not hesitate to offer it as one of the decks of choice for my clients.