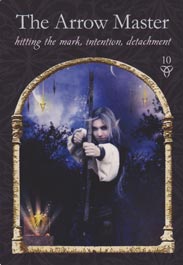 The popular Wisdom of the Hidden Realms Oracle has 44 cards, with images of spirits and guides from the unseen and mystical world. Each of the attractive, enhanced photographic cards is titled and shows keywords for interpretation on the face.


Card Images from the Wisdom of the Hidden Realms Oracle Cards 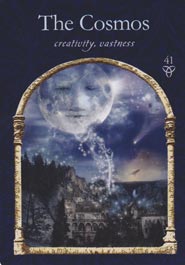 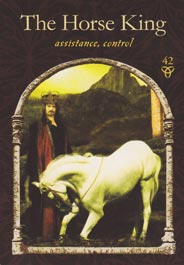 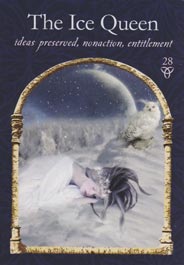 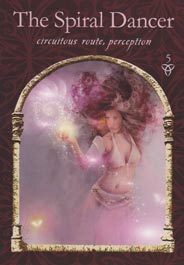 Wisdom of the Hidden Realms Oracle Cards Review by Henry

When I search for an oracle deck the first thing I look for is weather or not I'm drawn to the imaginary of a deck. This includes if I can see meanings without looking at the little white book before purchasing it. Safe to say, this 44-card deck met both criteria.

First the bad. When I bought the deck at least 15 of the cards were stuck together, almost like super glue. I’m not exaggerating. It became quite a challenge to separate them. I managed to get them unstuck but not without damaging some of the cards with actual tears on the front and back of the cards.

I looked into this matter further. It seems others had the exact same issue. Even other customers complained that some of Colette Baron-Reid decks have cards being reported missing. All my cards were there and I can live with these slightly damaged cards but I'm not exactly impressed with the overall physical quality of the cards themselves.

The good parts well outweigh the negatives. The images on the cards are absolutely stunning! Each card has rustic Roman Empire type columns surrounding the main image, almost like a window or door leading to a key concept or theme.

The feeling of the deck is very fantasy inspired but is not constantly kept throughout. Some cards have a Native American vibe, others an angel oracle style, and a couple have religious undertones such as Buddhism and Christianity but the vast majority are very fantasy inspired. It’s not an overly positive deck like how some angel decks can be, which I’m very thankful for and one of the key reasons I purchased this deck. That’s not to say this deck is dark but if you are looking for bright and sunny cards similar to most Doreen Virtue decks you won’t find them here.

The included booklet is 122-pages. Each card is illustrated in black and white. Most of the meanings Colette provides are quite relevant, with each card having two or three key words written on the card that fit the imagery and symbolism.

Colette explains this deck is meant to help deal with a present situation in the now, it's not meant to be used to foretell the future; although I’m sure there is no harm experimenting with what works best for you.

This deck can be used with reversals, referred to in the book as challenger cards. Strangely some cards carry a strict upright meaning, roughly three or four cards in the deck. I generally work with reversals in tarot but for this deck I think using it upright does seem to provide a much more accurate reading but its totally up to you.

I mostly only use this deck in combination with my tarot readings and rarely on its own. When combined with your tarot deck of choice is when these cards can work their magic. I use them to help clarify a key theme to the querent, usually for simple spreads such as a past present future. Although some clients don’t always understand the oracle card that is drawn I find it usually helps me tune into the reading further to help them understand what their reading is focusing on.

So should you buy this deck? It depends. If you want an oracle deck that has a fantasy feel mixed with a few odd choices then buy it. The cost of this deck is under $15.00, which is an amazing deal. However, as a cautionary note your cards may be slightly damaged when you unwrap it for the first time so be prepared for this in advance and you will enjoy your purchase much better.

It offers a generous mix of both honest and uplifting messages that you can feel good about providing to your clients, friends and for yourself. It does not offer purely gentle positive meanings like how some of Doreen Virtue’s decks do and that is something I’m ok with and actually prefer.

Out of all the oracle decks currently in existence this is the only one I feel a strong connection to, which is saying a lot. I give the Wisdom of the Hidden Realms Oracle Cards a 3 ˝ out of 5 stars.


Complete Details of Wisdom of the Hidden Realms Oracle Cards


Similar Decks to Wisdom of the Hidden Realms Oracle Cards