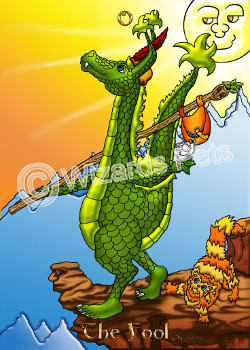 The Wizard's Pets Tarot is a cute, child-friendly version of the Rider-Waite, featuring a mix of dragons and people on its colourful cards. The deck is the creation of Pamela Steele, whose first project was the Steele Wizard Tarot. 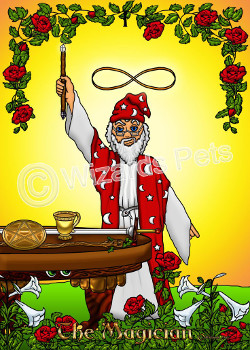 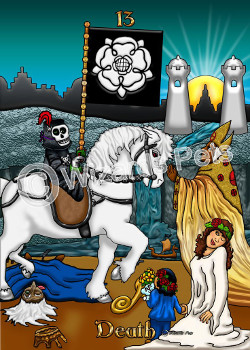 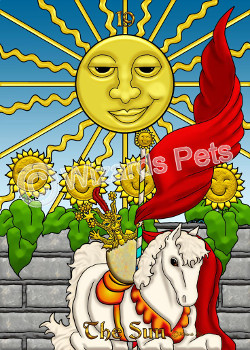 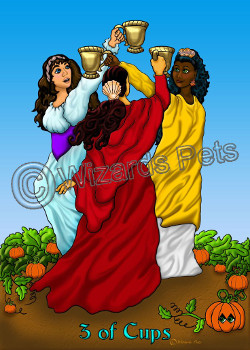 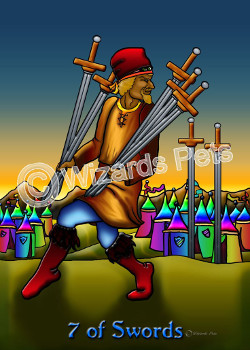 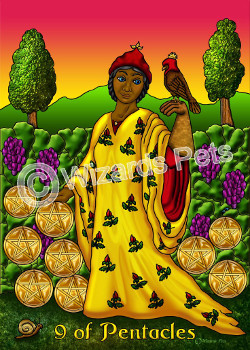 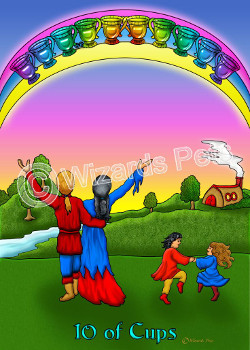 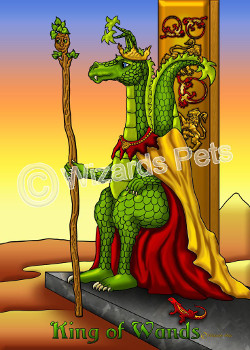 “Awaken your inner Wisdom.
Believe in yourself.
Connect to your Highest Truth.”
(The ABC’s of Tarot.)


The Wizard’s Pets Tarot is the latest deck from artist/author Pamela Steele (The Wizard’s Tarot). The kit contains a 78 card playing card size deck that follows the Rider/Waite/Smith tradition, a companion book, and a black and white coloring book. The box is heavy duty cardboard, with a magnetic close on the right hand side. The cover shows a pictures of The Fool, while the back contains information about the deck, along with quotes from Den Elder, Juno Lucina, and Erik C. Dunne.

The thought process for this lovely deck evolved from the antics of Steele’s children when they were young. It started with the painting of a baby dragon as a gift for a baby shower, which morphed into requests for dragons doing all sorts of things! In 2010, Steele wrote and illustrated three children’s books (incredible books!) based on dragon characters. In 2012 Steele’s then nine year old granddaughter asked for a Tarot deck. When told she would have to wait (Steele could not find a deck that she felt was appropriate for children), Paige (Steele’s granddaughter) asked her grandmother to make a deck for her. What grandmother could refuse! And so … we have the Wizard’s Pets Tarot!

The companion book starts out with a foreword from Kim Huggens (The Complete Guide to the Tarot Illuminati). She talks about falling in love with the Tarot at the age of nine, and her desire for a deck that she could relate to. In the “Wizard’s Pets Tarot”, Huggens has found a deck that appeals to her inner child, and calls the cards playful, mystical, and welcoming. She talks about the immersive world that Steele has created with this deck, and the magic and wisdom contained within. Seriousness, combined with playfulness, joy, and creativity.

Also included in the companion book are sections on What Is Tarot?, Tarot Myths and Truths, Tarot Ethics, caring for your Tarot deck, Asking Questions, and more. Spreads include a three card Past/Present/Future spread, a four card Decision Making Spread, the six card Soul Quest spread, and the ten card Celtic Cross spread.

Each card is presented with a color photo, a few words on the nature of the card, Guidelines, Reversed, and Instincts (questions for the individual being read for). Note: in all transparency, I need to let readers know that I had the honor to develop the questions for each card.

The cards are 2 ˝” by 3 ˝”, with a lovely linen finish. The backs feature a black background, with a slender blue inner border, followed by a wider green border in a celtic pattern, and a slim lavender inner border. In the center we see two trees of life, mirrored to each other, so that the card is reversible. The card faces are free of borders, and show the card title/suit at the bottom. The artwork follows the Rider/Waite/Smith pattern, with some cards given over to delightful dragons.

The Magician carries the thought “As you think, you create.” The guidelines talk about creating through desire, and manifesting thought into form. Reversed talks about misuse of abilities and talents. Instincts includes the question “What do you want to create in your life?”

The Hermit carries the thought “Your heart knows the truth.” The guidelines talk about confidence and inner wisdom. Reversed talks about immaturity, and rejection of wisdom. Instincts includes the question “What are you refusing to listen to?”

Judgement carries the thought “Time to reinvent yourself.” The guidelines talk about awakening on many levels. Reversed talks about ear of change. Instincts includes the question “Why do you doubt yourself?”

The Page of Wands carries the thought “Be confident the news that you need is coming.” The guidelines talk about information coming from a new source, or perhaps a birth. Reversed talks about news pertaining to blockage in growth. Instincts includes the question “What new sources are coming your way?”

The Queen of Pentacles carries the thought “Comfort and security crate a feeling of home.” The guidelines talk about intelligence, security, and creativity. Reversed talks about self-pity leading to lack of abundance. Instincts includes the question “Where are you being creative?”

The Queen of Swords carries the thought “You are stronger than you think.” The guidelines talk about strength and honor. Reversed talks about energy directed at chaos and destruction. Instincts includes the question “Where do you need to be flexible?”

The Six of Cups carries the thought “Learn from the past.” The guidelines talk about a pleasant meeting with someone from the past, or a memory from the past. Reversed talks about the inability to adapt to change, and the emotional failure that follows. Instincts includes the question “What memories from my past are coming to me”

The Two of Swords carries the thought “Overthinking a situation causes confusion.” The guidelines talk about being at a stalemate. Reversed talks about a release of tension. Instincts includes the question “Where do you need balance in your life?”

The Wizard’s Pets Tarot opens up a whole new world, with characters such as Edlyn Whiteoak, Sydney Brightscales, Jasper Stripetail, and Emo Rattlebush. I love the feel of the deck, and the small size. The coloring book takes the understanding of the cards to a whole other level. Suitable for you, your children, your grandchildren, and anyone that wants to connect with their inner child.

The Wizard’s Pets Tarot is a whimsical fantasyland tarot that has been popular with users since its initial publication in 1984. The Wizard’s Pets themselves are a brilliantly coloured parade of placid and benign dragons who coexist with faintly mediaeval and hippyish people. In spite of the HR Puffinstuff atmosphere this is a deck with a solid Rider Waite Smith foundation – the settings and mis-en-scene adhere closely to Pamela Colman Smith's famous images. Dragons are extremely populous in this deck - they dominate the Major Arcana with only The Magician, High Priestess, Chariot, Strength, Hermit, Death, and Tower featuring humans. Likewise the Court cards all feature dragons taking on the roles of King, Queen, Knight, and Page.

This is a 78 card deck with 22 Major Arcana and 56 Minor Arcana. There are no renamed trumps and follows AE Waite’s traditional ordering. The Minor Arcana is fully illustrated, with four suits – Wands, Cups, Swords, and Pentacles. There are 4 Court cards per suit – King, Queen, Knight, and Page – in that order.

The titles of all cards are written at the bottom of the image with differing colours to help differentiate the suits. All Major Arcana titles are in golden brown, Wands are in deep green, Cups are in sky blue, Swords are in an airy violet, and Pentacles in a strong sunny yellow. All cards have Arabic numbers, including the Major Arcana.

The cards measure 64 x 89 mm which makes them approximately the same size as an average deck of playing cards making them easy to handle and very child-friendly. The card stock is excellent – thin, quite flexible, with a glossy finish and a linen-like texture. The cards shuffle extremely well thanks to the slightly toothy texture on the back of the cards. The quality of the print is excellent – the lines are clean and crisp, the colours are brilliant, with no misprints, no blurry lines or bleeds.

The artwork is reminiscent of children's picture books – non-threatening, playful, and a bit cutesy. Clever use of computer art techniques gives 3-D effects to details, while the central figures remain quite cartoonish. Cartoonish too is the artist's palette – strong, vivid colours, with a predisposition towards dramatic sunsets and lurid evening skies.

The cards along with the guidebook and a colouring book are packaged in a large and solid cardboard box.The cover is glossy and printed with bright images from the Wizard’s Pets Tarot, and Celtic knot work in bright green, blue, and purple. The lid is held shut with magnetic clasps; and there is enough room inside for the user to place a reading cloth or card bag.

The guidebook – The ABC’s Of Tarot is 111 pages of information, in English only. This guidebook is written with an absolute beginner in mind, and so contains good information on such topics as: What Is Tarot, Keeping a Tarot Journal, Tarot Myths and Truths, Tarot Ethics, The Care and Feeding of Your Tarot Deck, Asking Questions, Significator Cards, Shuffling and Dealing The Cards. Choosing a Spread includes 5 divinatory layouts – everything from a 1-card draw to the Celtic Cross. There is a generous amount of information for each card – a key phrase which summarises the essence of the cards meaning, 'Guidelines' which is divinatory information for upright cards; 'Reversed' - obviously interpretations for reversed cards; 'Instincts' which is generally 4 questions which the seeker needs to ask themselves, pertaining to uncovering the *personal* meaning of the card. The definitions and interpretations are fairly standard and do not venture into any progressive or groundbreaking territory.

Also included in this box set is a colouring book with black and white reproductions of all the cards so you can have a go at colouring your own version of this deck.

Given the quality of the information in the guidebook and the attention to Rider Waite Smith detail in the cards this would be a suitable deck for a learner, or for children. In fact a large part of its powerful appeal is to a nostalgic longing for the bright colours and naivete of childhood… And of course if you love dragons in any form then this is a must-have deck for you.