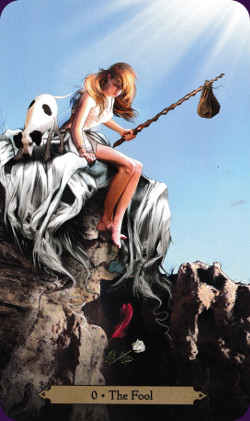 The Wizards Tarot is set in a Hogwarts-like universe, a world of modern magic and jeans-clad wizards. The 78 cards are crisply and beautifully illustrated, and accompanied in the box set by a 235-page guidebook for beginners.


Card Images from the Wizards Tarot 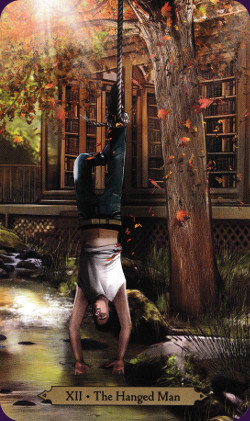 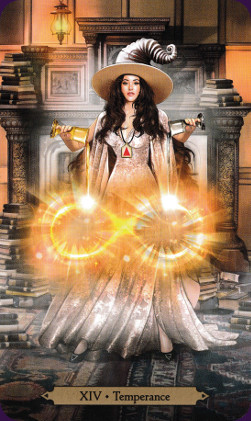 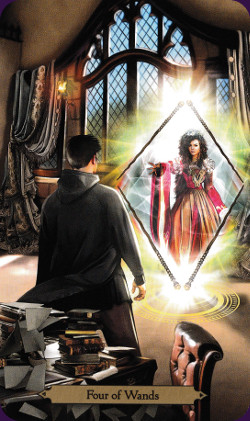 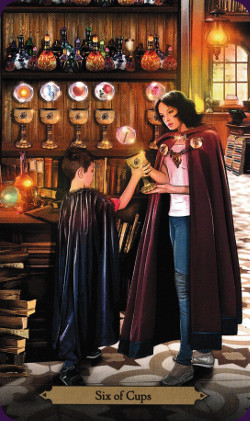 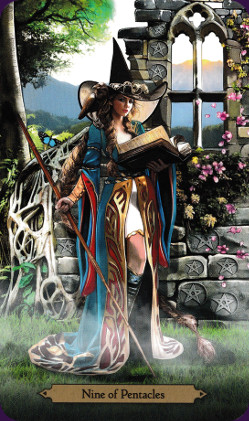 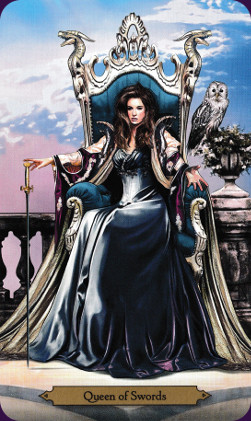 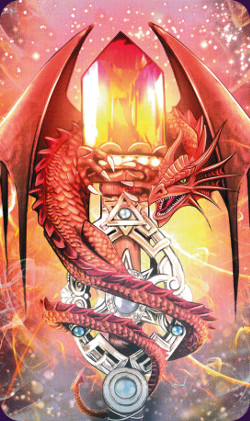 What exactly is a wizard? Well, a wizard is a bit like a witch, except different... actually it's pretty easy to find a definition of what a witch is, in fact it's pretty easy to find a witch, well compared to a wizard anyway. The fact is that wizards occupy more space in our imaginations than they do in 'real’ life - in books, movies, and TV series such as Harry Potter and Lord of the Rings to The Magicians, The Dresden Files, the Alex Verus books, The Rivers of London series to name but a few. It is because of this nebulousness that wizards make such a wonderful subject for a tarot deck.

What we do know is that wizards are associated with study, learning, knowledge, wisdom, signs and symbols, the hidden, magic, and fantastic libraries. The Wizards Tarot picks up the idea of novices and adepts learning, sharing, and wielding their skills, and plays with it... bringing you all the joys and challenges of wizardhood.

The Wizards Tarot occupies a fantastic world of castles and English Gothic-style university campuses (think Hogwarts or Brakebills) where the magically inclined dress down in jeans and T-shirts and dress up in corsets, silks and satins. And while I do prefer my wizards in floppy-brimmed hats, modern wizards here sometimes wear cone (of power?) hats that make them look a bit like trainee Smurfs. There are plenty of scenes set in appropriately forbidding woods, libraries well stocked with hefty tomes of eldritch knowledge, and the alchemistry lab – complete with floating test tubes and bubbling alembics. Calculators and wands are used to solve problems, and one can almost hear the pattering of wizardly feet along the cloisters.

This is a traditional 78 card, fully illustrated tarot deck. The Wizards Tarot has 22 Major Arcana, and 56 Minor Arcana. The Minor Arcana is divided into four suits (Wands, Cups, Swords, Pentacles) of 14 cards each; 10 number cards, and 4 Court cards – Page, Knight, Queen, and King. The titles and ordering of the Major Arcana follows the standard established by AE Waite, no cards have been renamed.

The cards measure 70 x 120 mm which makes them a fairly average sized tarot deck, cut to sit comfortably in most people's hands. The card stock is exceptionally thin, light, and flexible. It has a highly polished finish, with a very smooth back and lightly textured face which facilitates easy handling of the cards. These cards slide when they are shuffled and do not stick together or clump. If you are heavy-handed when you shuffle you will need to be very careful with these cards, their lightness makes them extremely user-friendly and pleasant to handle, but also easy to bend and crease. The print quality is excellent, these are very detailed illustrations with a broad range of colours and textures which are beautifully replicated. The images are clear and crisp, there are no misprints, no blurring, and no colour bleeds.

The arcana and suits are not colour-coded, and no particular colours or colour schemes dominate the deck. The artwork is digital composition with excellent attention to detail and almost televisual special effects. There is that tell-tale blurriness that creeps into digital art from time to time, but this is largely confined to the background of the Wizard Tarot. The artist's palette is broad and natural - while the settings may be sumptuous and exotic and the magic may be wild, the wizards themselves still resemble very attractive human beings – none of that green-faced blue-faced tomfoolery here.

The illustrations are for the most part remarkably consistent, however there is one card that stands out as being anomalous to the Wizard Tarot – The Moon. While most of the other cards present some kind of narrative, and in fact many of the characters are recurring, the Moon card doesn't seem to fit. Starring a Gojira-sized lobster with walrus tusks menacing a toy sized dog and wolf against a background of forbidding dark towers, the effect is quite Lovecraftian - Dagon looming over Innsmouth.

These are borderless images that fit to the edge of the cards. Both numbers and titles are listed in a narrow golden frame near the bottom of the illustration. The design on the back of the cards – a dragon wrapped around a crystal mounted on a hilt – is not reversible. The cards and guidebook are part of a box set. The box itself is made of heavy cardboard and has a fold back lid, which is held shut with magnetic clasps. It is papered in glossy navyblue with numerous illustrations from the Wizards Tarot decorating it. It is also printed with information about the deck, and publisher’s details. The inside of the fold-back cover is printed with the same design which decorates the back of the cards – a dragon twining around a decorative crystal.

The cards come sealed in plastic, and sitting in a cardboard well in the centre of the box. A navy satin ribbon is threaded across the base of the well which enables the easy removal of both the guidebook and the cards from the box. The well itself is printed with details from the Ace of Wands card – a little reminder to the Seeker of the magic to come. While these box sets are somewhat bulky, they do offer excellent protection for your deck and guidebook. It's never going to be something that you will just slip into your handbag where its size and weight will go unnoticed, however a box set like this one isn't too big for a tote bag or backpack.

The 235 page guide book is well bound, printed on heavy, glossy paper, and written by Barbara Moore. All Moore's books are worth their weight in gold and this one is no exception. Her books are generally written for absolute beginners, however there is plenty that an adept can glean here too. The ‘Introduction’ outlines the ideas behind the Wizards Tarot, and also explains the general layout of the guidebook.

Chapter 1 'Of Tarot and Wizards’ is a comprehensive history of the tarot, explaining some of the conventions of the tarot, and also what a newly minted tarot reader can expect to learn and gain from their cards.

Chapter 2 'Reading the Cards’ takes the Seeker through the fundamentals of tarot card reading, which includes daily practices, exercises, and suggestions for tracking one's progress. It also lays out the basics of how to do a reading. Included here are three 'cheat sheets’ (quick lists) one for Reading Tips, one for 'Basic Steps for a Tarot Reading’, and a ‘Suits and Numbers Keywords’.

Chapter 3 'The Major Arcana’ moves card by card through the entire Arcana. On the lefthand page is a full colour reproduction of the tarot card illustration, on the right-hand side are keywords for both upright and reversed cards. This is followed by the 'Meaning’– a paragraph which describes in essence what is happening in the illustration and how this translates to the Seeker’s question/reading/life. Finally comes 'Advice’ which is a paragraph of prescribed action, suggestions, and ideas connected to the card in question. Sometimes the advice pertains to the Seeker’s emotional and mental states while other times it looks at physical acts and actions one can take for an advantageous outcome. All the divinatory meanings are fairly standard, popularly accepted interpretations. While not soft peddling some of the darker aspects of tarot, Barbara Moore generally looks for solutions to issues and how to effect positive outcomes from negative situations.

Chapter 4 'The Minor Arcana’– this chapter divides the cards up by number rather than by suit, and in doing so looks at the powerful effect numerology has on tarot. Each Minor Arcana card is reproduced in full colour on the left-hand page, with relevant information on the right. Again, keywords are given for both upright and reversed cards. Minor Arcana cards have less specific information, Meaning and Advice are not parcelled out in neat little paragraphs. Barbara Moore's information is such that it instructs and educates the Seeker without too much recourse to the tarot illustrations. Conversely, if you are curious as to the symbolism and narrative of the artwork you may find yourself thwarted to a certain extent. But, keeping in mind that tarot reading is a skill that is learned not bestowed, this gives the novice Seeker space to create their own narrative around the illustrations based on the keywords and Barbara's expert guidance.

Chapter 5 'The Court Cards’. Again, each card this fully illustrated on the left-hand page, while on the right keywords are given for upright Court cards only. Both the keywords and the paragraph that follows describe personality traits rather than events or abstract ideas that are sometimes associated with the tarot Court. In the Wizard's Tarot Court cards are definitely people, and as such, aspects of their personality that may be desirable in one set of circumstances can become a liability in another.

Chapter 7 'The Magical Path’ looks at the Fool’s Journey through the lens of the Wizards Tarot. Along the way it draws the reader’s attention to some of the Easter eggs and homages paid to pop culture wizardry hidden throughout the deck.

So, if you are looking for a wizard’s tarot, or rather a tarot featuring wizards then you need look no further – this is the deck for you. Here are wizards living their best lives. There is none of this cunning-mage-disguised-as-a-beggar business, these wizards have enviable environs and wardrobes, as well as the all-important magical powers. While it probably isn't the greatest absolute-beginners tarot deck (because I am a purist and think you should start with a classic deck) anyone with a bit of tarot reading experience under their belt will find this deck easy to use.

For all of you who have aspired to urban Wizard-dom the tarot deck is here, and it is so much fun!