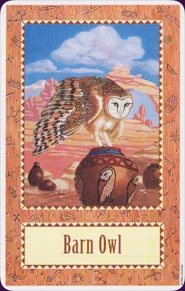 The Wolf Song Cards have a Native American theme and features 60 attractive paintings of animals from Northern America in their natural settings. Available as cards-only or as a book set. 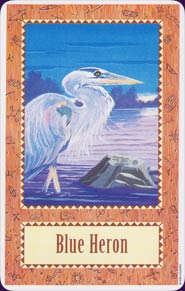 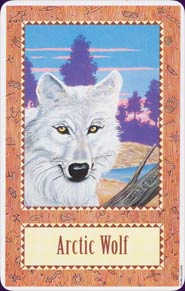 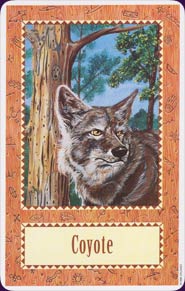 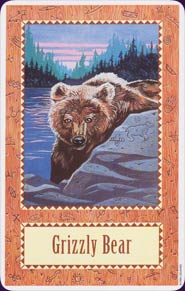 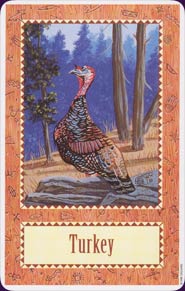 This is a deck that is so worthy of a review and have I been surprised by the lack of one. Yes the deck has a lot of faults, probably too many for most people, but in my opinion the actual pictures more than make up for that.

I’ll run down the many faults before I say what is good about it: The LWB isn’t one of the best and only has a few key words about each card, which ideally means you would need to buy the book and card set. The worst thing about the book is the layout; the cards aren’t numbered and aren’t in alphabetical order either, making finding card meanings very difficult. The spread in the LWB isn’t as clear as it could be and the extra spreads that appear in the book that comes with the book and card set aren’t much clearer. I haven’t researched animal totems but find the meanings given to the cards to be OK and they seem to make sense. I have heard it said that a lot of the meanings to these cards are wrong. They maybe different to other people’s interpretation, but that doesn’t make them wrong, just different.

Down to the cards themselves. The card stock is good, in fact probably the best I have come across, and well laminated without going over the top. They do have a border around them, but this “wood effect” border adds to the beauty of the cards. The cards are a nice size measuring about 3” wide by 4 3/4” length and the pictures take up 2 Ľ” by 3 “, leaving room at the bottom for the title. Lew Hartman has drawn some of the nicest animal and bird pictures that I have ever seen in cards, even looking in the eyes of each animal tells a story by itself. The only criticism I do have with the way they have been drawn is the lack of tails. A good majority of the pictures are either just portrait shots or have the animals’ tails either hidden or cut off. Although this isn’t a big issue, I do find myself wondering “What is the use of having a picture of a White tail Deer when the tail is cut off in the picture?”

Reading with the cards. Work needs to be done with these cards before you can really attempt to read with them. For starters you will need to make your own little white book, putting the animals down in alphabetical order in order to find them. Then you’ll need a good read at the book to realise how much more can be added to each card other than the Key Words given in the LWB. I have made my own list of Key Words taken from the book and this gives a lot more depth to a reading.

If you are prepared to put in the work creating your own book and putting down the Key Words that will help you, then the cards are very good and I would highly recommend them. Be warned though, straight off the shelf they aren’t great for reading with (still worth buying for the pictures if you can get them cheap enough).