Wonderland Tarot in a Tin 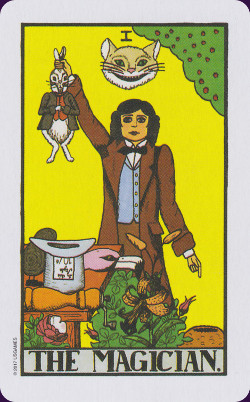 The Wonderland Tarot in a Tin is a re-issue of the original Wonderland Tarot, packaged here in a pocket-size tin. It's a 78-card deck themed around the stories, scenes and characters of Alice in Wonderland.


Card Images from the Wonderland Tarot in a Tin 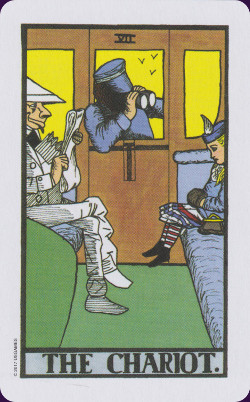 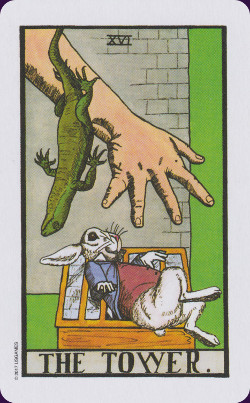 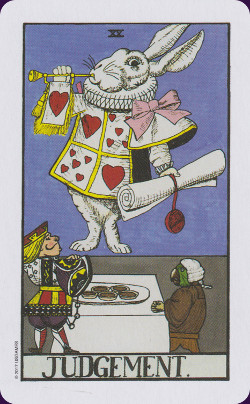 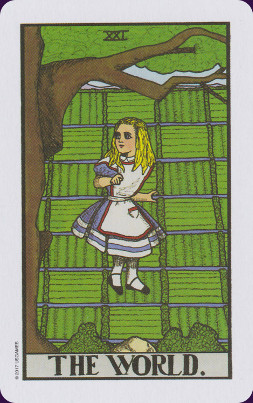 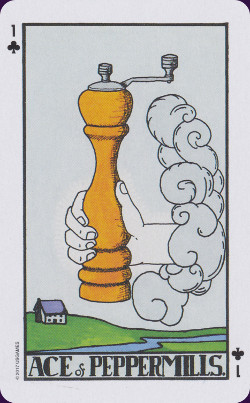 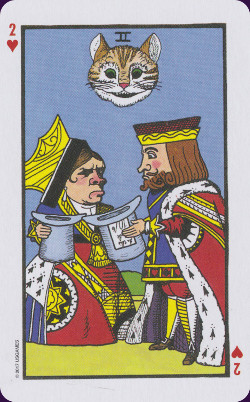 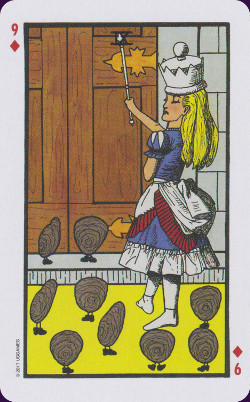 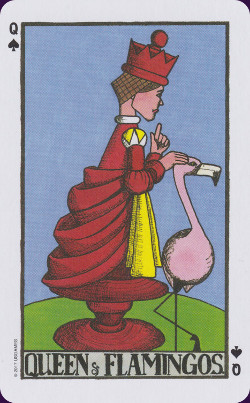 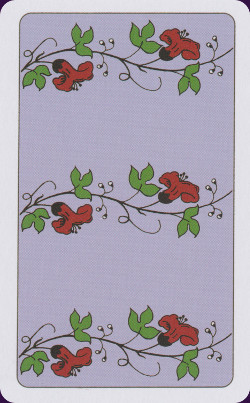 Wonderland Tarot in a Tin Review by medusawink

‘Alice's Adventures in Wonderland’ (often shortened to Alice in Wonderland), written by Charles Lutwidge Dodgson aka Lewis Carroll, was first published in 1865. The companion volume ‘Through the Looking Glass and What Alice Found There’ was published in 1871, both stories illustrated by prolific artist and cartoonist Sir John Tenniel. Alice in Wonderland tells the story of a young girl who follows a rabbit down a rabbit hole into a fantasy world, and recounts her adventures there; Through the Looking Glass recounts Alice's adventures after she climbs through a mirror into another world. Whether Looking Glass World and Wonderland are the same place is never made specifically clear in the stories.

The tales are a treasure trove of political and social satire, mathematical puzzles and games, puns, parodies, riddles, and nonsense rhymes. Tenniel supplied some 90 illustrations for both stories which have been adapted for the Wonderland Tarot. The original Wonderland Tarot was published in 1989 and after going out of print became a much sought after collectors item.

The Wonderland Tarot In A Tin is a 78 card deck, it has an additional two mirror-image title cards which can be used to bookend the deck. The Wonderland Tarot is a Rider Waite Smith based deck, and as such the illustrations have been manipulated to conform to the basic RWS image structure.

The deck has 22 Major Arcana, which follow the titles and ordering established by A. E. Waite. The Minor Arcana consists of 56 cards divided into four Alice-themed suits with Flamingos representing the suit of the Swords, Peppermills replacing Wands, Hats instead of Cups, and Oysters in the place of Pentacles. Each suit has 10 number cards and 4 Court cards – Page, Knight, Queen, and King.

The cards measure 58 x 95 mm, making them fractionally smaller than the original deck which measured 62 x 100 mm. Either way this is a comparatively small deck, approximately the size of standard playing cards. The card stock is excellent, crisp and light yet sturdy, and flexible without being flimsy. They have a glossy finish, and the most faintly textured surface which makes them exceptionally easy to handle. They shuffle smoothly without being too slippery, or clumping together.

The print quality is excellent, with clear, strong lines and no misprints, blurring, or colour bleeds. Artist Morgana Abbey uses a limited palette of simple, flat colours – mid to light blues, greens, and browns, as well as flamingo pink, bright red, burgundy, and lemon yellow. There is little colour differentiation between the original 1989 deck and the 2016 reissue.

The original illustrations by Sir John Tenniel used good deal of crosshatching which provides chiaroscuro, depth, and texture but often gave his detailed images a dark atmosphere. Abbey has simplified the images with cleaner lines and in doing so made them much lighter and less oppressive. The whimsy and somewhat surreal ambience remains. The Major Arcana uses partial and whole scenes from Tenniel's illustrations, while the Minor Arcana uses characters from Tenniel's illustrations recast in RWS tableaux.

The images are contained inside a narrow black margin, with a wide white border. The Minor Arcana distinguishes each suit with playing card correspondences in the top left-hand and lower right hand corners of the border. The image on the back – red flowers on vines – is symmetrical and reversible.

The cards come packaged in a light-weight aluminium tin painted with images from the Wonderland Tarot as well as information about the deck, and publisher’s details. The finish on the paint is quite sturdy, however if the tin is stored with sharp metal objects such as keys it is only a matter of time before the finish become scratched. This tin of cards is small enough to slip into a shoulder bag or backpack without weighing it down, and affords the tarot deck the ultimate protection from damage.

The Wonderland Tarot in a Tin comes with a 55-page Little White Book written by Chris Abbey – the deck’s conceptual originator. The Introduction wisely advises the Seeker to firstly acquaint themselves with the Alice stories, before moving on to explain the genesis of the deck. There is also a brief explanation of the structure of the Wonderland Tarot. The Major Arcana cards benefit from a description and explanation of the illustrations, brief though they may be. Divinatory meanings for both upright and reversed cards are given, and these follow standard accepted interpretations fairly closely, nothing too progressive or outrageous here. The Minor Arcana has no descriptions, only upright and reversed interpretations.

While some of the illustrations use the stories to add depth to the divinatory meanings quite effectively, other images are simply representational, featuring familiar Wonderland characters recast in Rider Waite Smith scenes. Instructions for the 10 card Celtic Cross layout is also included.

The Wonderland Tarot In A Tin is a light-hearted and whimsical deck which is nonetheless a totally functioning tarot. If you are a fan of Alice in Wonderland or love the illustrations by Sir John Tenniel then this is the perfect tarot for you. If you are looking for a deck that reflects a childlike innocence then the Wonderland Tarot is surely worth a look in. It is a deck that can be used for play, or by children, or even in situations where a querent finds conventional tarot decks to be unsettling. In other words it is surprisingly versatile. The Wonderland Tarot In A Tin is a welcome reissue of a charming deck.


Complete Details of Wonderland Tarot in a Tin


Similar Decks to Wonderland Tarot in a Tin