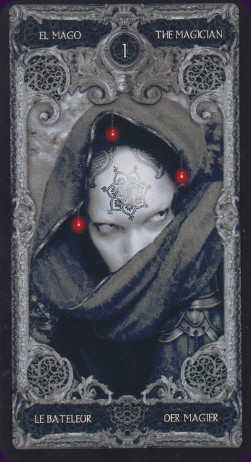 The XIII Tarot is very literally a dark deck; illustrated in greys and blacks with highlights in red. The artwork on the major arcana is a little gothic and a little Giger-esque, while the minor arcana have simple arranged pips without scenes.


Card Images from the XIII Tarot 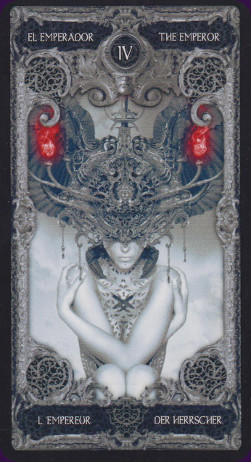 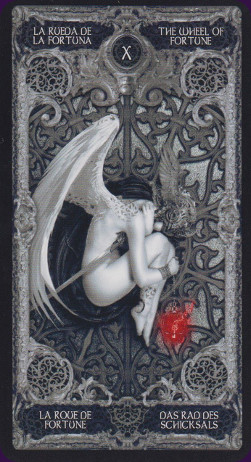 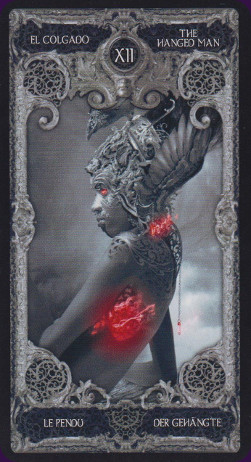 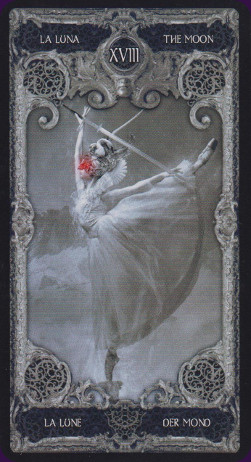 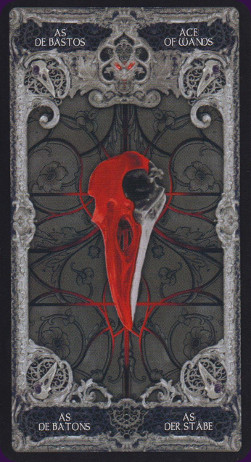 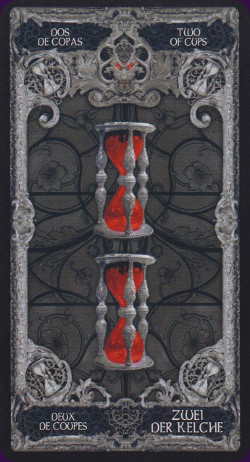 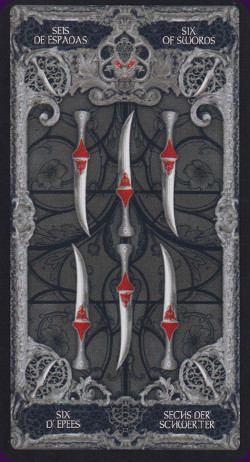 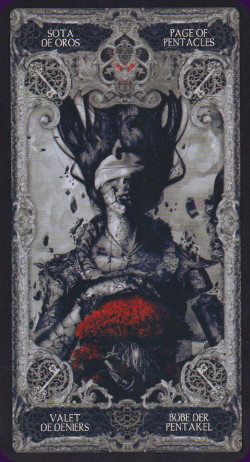 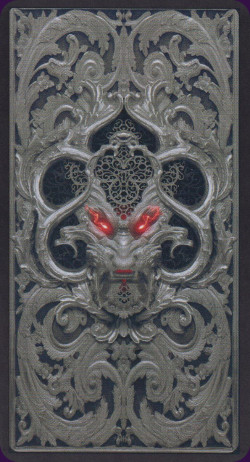 There is an ongoing trend among tarot publishers for creating decks that showcase the works of artists. They range from such well-known painters as Gustav Klimt, Alphonse Mucha, and Salvador Dali to well-known fantasy artists and illustrators such as Nicoletta Ceccoli, Anne Stokes, Joseph Vargo, and now Spanish and digital artist Nekro.

Nekro has a consistent body of work so there is a better sense of continuity with these images then in many other showcase decks. Nekro's works are generally monochromatic photo compositions highlighted with splashes of colour – in the case of the VIII Tarot – shades of gray with flashes of blood red. Readers of fantasy novels may be familiar with many of Nekro's, illustrations – a hybrid of Steampunk meets Bram Stoker's Dracula (the movie) – a style both Gothic and Baroque with an undercurrent of biomechanics. Nekro's artworks are heavily detailed and close inspection of his images revealed just how finely and elaborately embellished each image is. Use of desaturated colour gives his works a slightly sinister air and an aura of gloom and mystery.

This is a 78 card deck with 22 Major Arcana and 22 Minor Arcana – only the Major Arcana and the Court cards are fully illustrated. The Minor Arcana are pip cards – Cups are depicted as hourglasses, Swords as curved daggers, Wands are crow's skulls, and Pentacles are depicted as keys. Each card Has an elaborate frame with the suit symbol in the corners. The title of each card (in small white print) is given in four languages – Spanish in the top left-hand corner, English top right, French lower left corner, and German bottom right. The Major Arcana have Roman numerals framed at the centre-top, as well as their titles in each corner. The Major Arcana have no renamed cards, and the Court cards are titled Page, Knight, Queen, and King. The image on the back, a feline or perhaps Dragon surrounded by Rococo curlicues, is not reversible.

The cards measure 60 x 110 mm, a compact deck that fits nicely into the hands. The card stock is flexible, smooth, and low sheen – this deck is easy to handle and shuffles well without being too slippery. The quality of the print regrettably is not brilliant and the clarity and quality of Nekro's detailed artwork has been compromised. The shading, crystal clear in the original images, showcasing the versatility and wide, subtle range of black gray and white medium, has been faded. The depth of field has been weakened, giving many of the images indistinct edges and blurring.

The Little White Book is a foldout pamphlet in four languages – Spanish, English, French, and German. There are no descriptions of the cards; the Major Arcana are given upright and reversed meanings as well as a brief summary of what the card represents. The Minor Arcana have short upright and reversed interpretations. There are no significant departures from commonly accepted divinatory meanings. There is also information about Spreading The Tarot Cards. These instructions are rather unusual, and very poorly translated. One would do well to disregard these dubious directions and invest in a book about reading the tarot.

In spite of these shortcomings this is a very striking deck. If you like Gothic decks then the VIII Tarot is a must for your collection. This tarot will also work very well as a shadow deck. It is not good for beginners as the images are too idiosyncratic and contain few if any commonly recognised tarot symbols. Tarot adepts will have very few problems with this deck – it's just a matter of whether you find Nekro's art appealing or not. There is a strange beauty to these cards, they are good, but they could have been so much better.