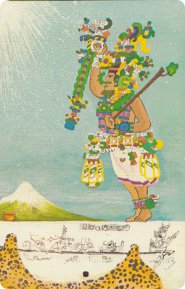 Symbolism, numbering, scenes, figures, and art from the ancient Mayan culture have been fitted into the standard 78 card Tarot framework. The major arcana of the Xultun Tarot are untitled and use Mayan numbers only, but the minor arcana have English titles as well.


Card Images from the Xultun Tarot 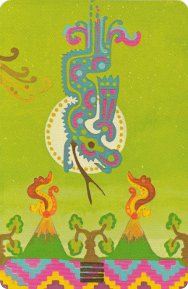 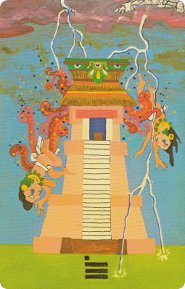 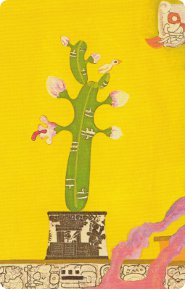 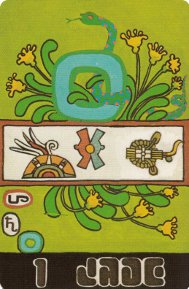 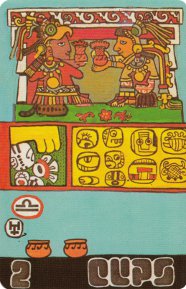 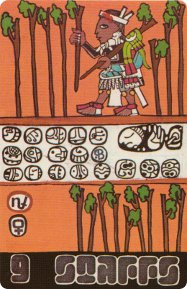 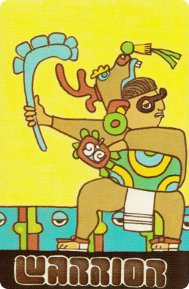 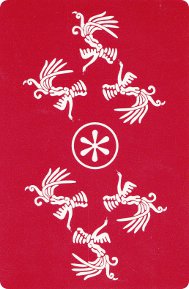 This deck is full of Maya symbols, Maya spells A-Y-A-M or Ay-Am or "I AM", this deck is the story of the Journey of our human soul through spirit and matter. it is not a tradition tarot in the sense of following the bombardment of tradition one would expect in the rider-Waite decks. instead it's more earth centered, or celestially connected to the earth changes occurring during this end or beginning of the 26,000 year (25,920 for academics) of the precession of the equinox.

The 22 Arcana are painted from the artist Peter Balin, he was born at the foot of a sacred mountain in New Zealand called Mt. Taranaki where the Maori natives received prophetic instructions from a being called Ratana. The Maori have since become of the most influential native peoples with the most rights and respect within the Commonwealth as they have exercised their sovereignty and maintained cultural practices perhaps better than the natives in North America.

The elders of many native groups including the Maoris have shared the hidden teachings of the dream of the planet called the twisted hair elders teachings and this includes the energy fields of both the planet and the human energy fields and how to heal using energy work and work with nature to establish harmony for both the earth and the person. The HIFT is happening now, the shift in consciousness about the universe and beings and vast expanses of extraterrestrial brothers and sisters and start nation people's are all working in harmony to create the dream for the planet which will manifest in lightening fast changes.

Back to the deck. It's not for the unprepared, and yet it's calling on your psyche to dive deep into who you are and why you are here, once you open the deck or book of life, you cannot go back to who you were as it is a cosmic tool that tunes you into higher consciousness and will not relent until you look at your self in the mirror and crack the mirror so you can see through to what is on the other side, a whole new you, with new possibilities never imagined before now.

The bus to Mexico in 1972 from Los Angeles to Mexico was occupied by Peter Balin a young 20 something who sat next to an 80 year old researcher of Mayan temples called Frank Waters who wrote Mexico Mystique this deck was brought into existence by divine providence when the two sat next to each other and the young man was influenced by the knowledge of maya history of the man sitting next to him on the three hour trip. Once in Mexico , Guatemala, Belize, the young Peter Balin had a game plan of what are the most important temple images as he ventures out to start sketching them.

There is not enough time to describe the wisdom in the 22 arcana but Michael Owen has captured the deep work that these cards tell us in readings and the layouts are a reflection of our deepest dreams and fears and we can tap the subscripts anytime for the hidden memories and wisdom to move through our journey with grace and confidence.

This deck isn't for everyone, if you are called to it, it will be a companion for life, like a cat that wanders into your home and befriends you like a long lost soul mate and never leaves your side as long as you nourish it when it asks for some love or kibbles.

we are the ones we have been waiting for - maya saying.