The Yoginis' Oracle has 64 cards with images of yoginis, powerful female figures from Indian mythology. The deck has a deeply researched background in the Indian yogini tradition from author, Stella Dupuis.


Card Images from the The Yoginis' Oracle 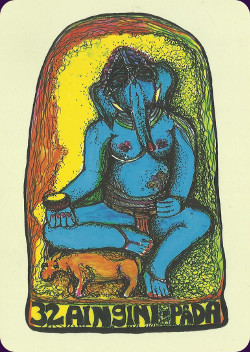 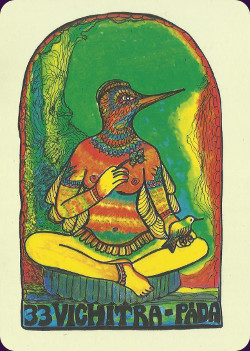 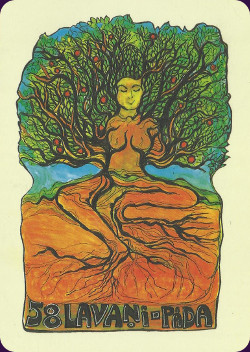 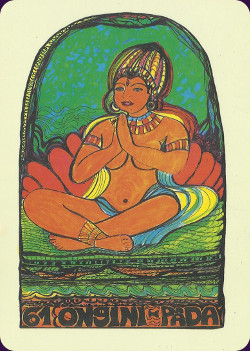 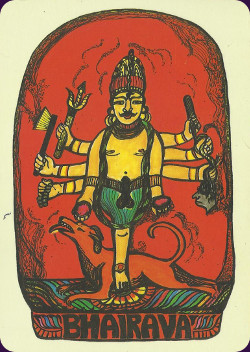 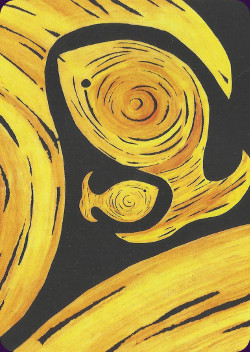 The Yoginis' Oracle Review by A. P. Payal

Before I offer comments on The Yoginis’ Oracle, I would like to analyse the term yogini briefly. There are various scholarly definitions of the term “yogini”– ranging from dangerous female quasi deity, a medium of spirits, a healer and to a powerful female practioner of yoga. Sondra L. Hausner defines the yogini as “a woman of accomplishment, imbued with the force of divine power. . . She may be human or she may take on a mythical form: quite often she is both. There is a deep ambivalence in the yogini” (32 'Yogini' in South Asia: Interdisciplinary Approaches). What remains the same across definitions is that the yogini is a powerful female figure whose agency comes from regular spiritual practice. Her practice enables her to evoke various energies of the Goddess Durga or Devi into her own body. This often makes her a figure of reverence and one that evokes fear as well. Steeped in myth, folklore and tantra, the yogini remains a term which evokes multiple histories. The authors of The Yoginis’ Oracle use the diffuse nature of the term to combine it with the tarot, thereby creating a unique and attractive deck.

Published by Om Book International in 2013, the deck has been created by Stella Dupuis in collaboration with Nancy and Gisele Dupuis. Stella Dupuis is a published author whose extensive travels and research have enabled her to write many books pertaining to the Yogini tradition spanning across India and Tibet. The box set contains 65 cards and a fully illustrated The Yoginis’ Oracle handbook. Written and conceptualised by Stella Dupuis, the deck has been illustrated by Stella and Nancy Dupuis. The illustrations draw upon the iconography of Yoginis’ temples cross India. Photographs of the temples feature in the handbook as well. Most temples depict 64 Yoginis and each of these is represented in the deck.

Stella Dupuis explains that “the Yoginis are energies that come together in order to synchronise and empower the inner forces in the human body and in the Universe” (10 The Yoginis’ Oracle Handbook). To initiate this process of synchronisation, Stella Dupuis has associated a corresponding sadhana or practice with each Yogini. The Sadhanas alternate between chanting, breathing exercises, yoga asanas, yoga nidra and meditation to the vibrating sounds of drums/conches. After reading about the link between the cards and the sadhanas, the question is– how does one use these cards?

The handbook provides detailed instructions on how to use the cards for readings and 2 cleansing meditative cycles. 64 of the 65 card-deck depict Yoginis while the final card depicts the God Bhairava. In various Indian myths, Bhairava is seen as the fierce embodiment of Lord Shiva. He is often sent to destroy the pride or ego of a God or a mortal. Stella Dupuis takes the import from these stories and transforms the Bhairava card into representing the querent. While using the deck for readings, one is to place the Bhairava card in the centre as representative of our desire to accept divine guidance from the Devi through the Yoginis. The cards picked by the querent are laid around the Bhairava card in a circular structure of varied card strength. The Yogini Chakra (circle) is an important symbol of the circularity of all energy in the Universe. Following the circular structures of the Yogini temples, the two readings also invoke the symbolism of the Yogini Chakra. The “Rhombus Reading” uses 4 cards placed at the 4 edges of the Bhairava card, while the “Rectangular Reading” uses 8 cards. As with traditional tarot spreads, each position has a meaning and it is the combination of the card and the position that provides insights to the querent. It is the associative sadhanas which give this deck a new dimension. The sequence in which the Yogini cards are picked provide the sequence of practices/ sadhanas that can be followed over the next few days to help the querent with his/her dilemma. Dupuis recommends this as “this will aid in fully understanding the power within you” (14). This enables the querent to understand the aspects of Devi as seen in the Yoginis they picked. I practiced these readings on my friends and they enjoyed performing the sadhanas as it helped them participate more in the process of the tarot reading itself. Through this addition, we see how each card then provides the opportunity for self-reflection and taking a new spiritual journey. Dupuis further extends this to the 2 meditative cleansing cycles– “The Circle of Yoginis” and “The Sixty-four Yoginis’ Yantra”. While the first is an 8-day cycle, the latter takes 64 days. I found the latter quite invigorating. I certainly felt calmer and more driven after making the various sadhanas as a part of my morning routine. It helps create a sense of discipline and to prepare oneself for each day. For those of us who might miss a day or two, Dupuis also provides instructions on how to return to the cycle. This is the sequence to be followed for “The Sixty-four Yoginis’ Yantra”:

The cards are rectangular with the dimensions of 10cm by 14.1 cm and a .5 mm thickness. They are firm to hold and have a matte finish. The back illustration evokes the birth story of Matsyendranath who is credited with writing the earliest treatises about yoga and spiritual transformation. The deck does not have the Major and Minor Arcana, instead it is divided into the 64 Yoginis and Bhairava. The illustrations are ornate line drawings with liberal use of colour. Each Yogini is shown to be seated with her animal vahana (companion) and/or varied attributes likes skulls, conches, tridents, swords or musical instruments. The artist has used colour to evoke the nature of each Yogini. The cards seem to have been created using multiple media– in addition to water colour and poster paints one also observes the use of sketch pens. A black fine liner or ball point has been used to add detail to the illustrations. The illustrations have a certain roughness to them which draws the eye to uncover every detail on the cards. The card number and Yogini name are painted on at the bottom. All the Yoginis are shown with their chest uncovered to show that one must embrace the body as part of one’s spiritual journey. The manifest forms of the Yoginis often have animal/bird/reptilian heads, each representing a distinct energy of the Devi.

The Yoginis’ Oracle Handbook contains an introduction by Dupuis, colour prints of each card with meanings and sadhana associations. While the manual provides detailed instructions on how to use the deck, the introduction is too brief. However, it orients the reader and urges them to do their own research. The website for the deck provides videos for sound meditation and instruction videos for yoga nidra and so on. This is very useful for people who do not have knowledge of yoga and meditation. The creators of the deck have envisioned all the possible ways of providing users with tools to empower them.

This deck serves as an introduction to a sacred Indian tradition in a stimulating and comprehensible way. However, I must add that this deck is suited to anyone who is committed to changing their lives in a meaningful way. Doing readings for people will take some time as one has to learn about the new system and new card associations. In addition to the wonderful images, the true value of these cards is the way in which they integrate spiritual practices into everyday actions so that the querent can awaken every energy and divine component within his/her own body.


Complete Details of The Yoginis' Oracle


Similar Decks to The Yoginis' Oracle