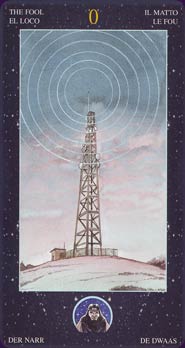 The Zodiac Tarot focuses on the Golden Dawn's astrological attributions with tarot cards to create an entirely new and unconventional deck of 78 cards. The scenic illustrations of the majors and numbered cards are set in a 1940s era world with symbolism derived from the astrological concepts, while the court cards are more stylised elemental representations.


Card Images from the Zodiac Tarot 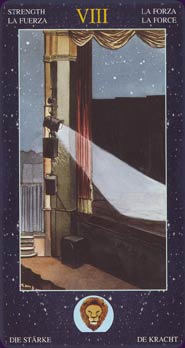 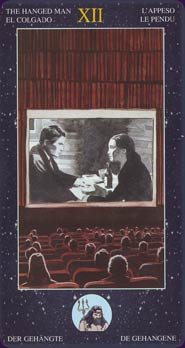 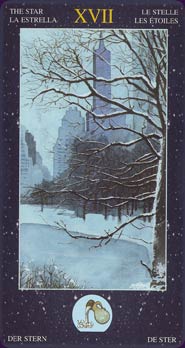 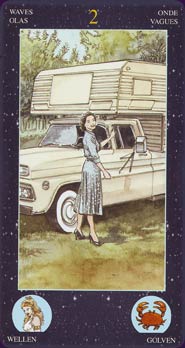 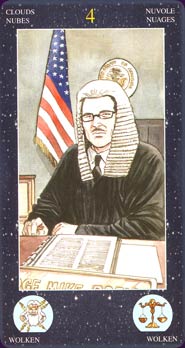 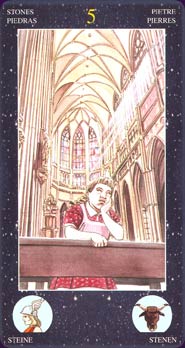 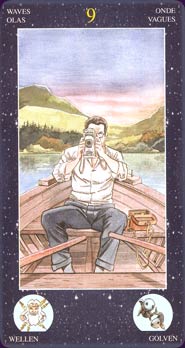 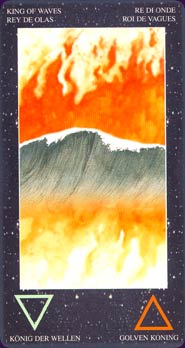 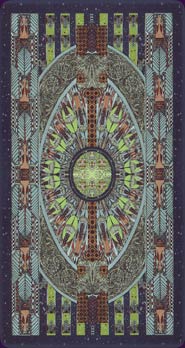 I fell in love with this deck the moment that I saw it! Perhaps this was because of the baby pictured on the front of the box (and the front of the LWB - Little White Book), or perhaps it was because of the 1940's type imagery on some of the cards ... the end result is that I love this deck! (It also doesn't hurt that Lee Bursten, someone that I consider to be a very accomplished Tarotist and wordsmith, wrote the text!)

In his introduction, Bursten describes the influence of the Golden Dawn on the Rider-Waite-Smith and Crowley-Harris Thoth Tarot decks. This influence was largely based on a synthesis of diverse occult systems, including Christian Hermeticism, Qabalah, astrology, Enochian magic, astral projection and Tarot. Bursten goes on to state that the sole Golden Dawn influence that was included in the Zodiac Tarot was that of their astrological attributions.

The astrological attributions have been placed within a modern day concept, rather than that of mythology or medieval times. This is what I was referring to above when I spoke of the 1940's type imagery. Many of the cards in this deck reflect images that some of us are old enough to have lived through, and which others may have seen in old movies or reruns of very old TV shows. Mainstream 20th century psychological interpretations are used for the astrological attributions, as opposed to a more Victorian worldview.

The Major Arcana follows traditional titles, with the following exceptions: the Hierophant becomes the Priest and the Wheel of Fortune becomes the Wheel. Strength is in position VIII, and Justice in position XI. The four suits are Torches (Wands), Waves (Cups), Clouds (Swords) and Stones (Pentacles). The Court Cards are Princess, Prince, Queen and King.

The imagery from this deck is aimed at matching the astrological attributions, rather than traditional imagery. In assigning astrological attributions to the Major Arcana, each card is assigned a Sign or one of the traditional seven Planets. The cards that the Golden Dawn assigned to the Elements will be assigned to the three modern planets ... Uranus, Neptune and Pluto. The cards in the Major Arcana that are assigned Signs are illustrated as Places. The Quadruplicates of the Signs (Cardinal, fixed or Mutable) are shown by the time of day seen on the card (Cardinal cards are daytime, Fixed cards are night, and Mutable cards take place at either sunrise or sunset).

The Majors that are assigned Planets show people on them from modern families: Grandfather, Grandmother, Father, Mother, Son, Daughter, and Baby. This is also the "cast of characters", as it were, that will appear in the Minor Arcana.

The Majors attributed to the three modern Planets of Neptune, Uranus and Pluto show scenes that represent the major societal changes that these planets represent.

The LWB is text only, no scans. It is in five languages: English, Italian, Spanish, French and German. Each Major Arcana card is listed by number, title, astrological attribution, and keywords. From the LWB:

The Minor Arcana is divided into decants (each sign is divided into three decants of ten degrees each). Each Decan is assigned a planetary ruler, so each card carries a Planet and a Sign. Each Pip (numbered card) shows a scene consisting of the People from the Major Arcana cards which are Planets, in the Places shown on the Major Arcana cards that are Signs, according to the assigned Decan. From the LWB:

Princess of Torches - Earth in Fire. The practical aspects of creativity (i.e. choosing the paint brushes).

Prince of Waves - Air in Water. Subjecting emotions and intuitions to intellectual analysis.

Queen of Clouds - Water in Air. Emotionally tinged thoughts. Strategies or plans based on intuition rather than rationality.

There is a short section on reading the cards, with an in-depth explanation of the Astrological Roles spread. Short bios are included for Lee Bursten and Luca Raimondo.

The imagery in this deck is set by association with astrological signs and planets. As Bursten notes, it is best to set aside imagery and symbols from all of the other decks that we may have worked with, and concentrate on the one in front of us. Here we see things like Strength being represented by a spotlight shining on a stage; The Four of Clouds showing a black robed magistrate (wearing an English style wig) sitting in front of his desk, concentrating on the papers in front of him. In the back we see the American flag (rather at odds with the wig!). The Four of Stones shows a baby in a crib, reaching out to be picked up; the Four of Waves shows a Grandmother backing up an RV (she is looking at the reader, so I hope she knows where she is going!).

The Three of Waves shows the same RV, with a young girl waving out of the window. The Seven of Clouds shows a figure going down a snowy hill on a sled ... memories from my own childhood coming back here! Temperance is a sleek airplane high int he sky; the Magician is a young girl walking along her front porch, approaching a white rocking horse. The Ten of Waves shows a Father holding a picture of his family, with the camera sitting in front of him. The Fool shows a high tower emitting airwaves; the Devil shows an empty jail cell. The Priestess shows a grandmother sitting in her garden; the Chariot shows the inside of the RV from previous cards. The Two of Torches shows a Father standing up in his child's swing, which hangs from a tree in the back yard. The Six of Clouds is another of my favorite cards ... a young girl is shown looking out the window at a large snowman, wearing a top hat and scarf, and a carrot for a nose.

The style of this deck is realistic (as far as the scenes and people are considered), done in muted colors of white, gray, black, red, orange, blue and green. All levels of Tarot students would find this deck easy to work with, and it is "family friendly", as in there is no nudity or stark, jolting imagery. The astrological associations are to the point, and would be easy to remember for someone who is just learning to work with them. I would call this a "feel good" deck ... one that we take out when we need a friend. This is a deck well worth adding to any collection.