Skeletal Death, black robes or armor, sometimes with a scythe or a flag featuring a white rose on a black field. There is often a rising sun. Sometimes there are other figures, the most common being a child.

Having left the tree from where he hung, the Fool moves carefully through a fallow field, head still clearing from visions. The air is cold and wintry, the trees bare. He knows he has started on his spiritual journey in earnest, but feels strangely empty and profoundly sad, as if he has lost something.


Before him he sees, rising with the sun, a skeleton in black armor mounted on a white horse. He recognizes it as Death. As it stops before him, he humbly asks, "Have I died?" And the Skeleton answers, "Yes, in a way. You sacrificed your old world, your old self. Both are gone, dead."

The Fool cannot keep from weeping. "Forgive me," he says, embarrassed by his tears.

"There is nothing to forgive," Death replies. "Mourning is natural and you must deal with your loss before you can accept anything new. Keep in mind, however, that old leaves must wither and fly away from a tree's branches, leaving them bare, before new green leaves can appear."

As Death rides away, the Fool sees the truth in those words. He, too, feels like a skeleton, all that he was stripped away. This, he understands, is how all great transformations start, by removing everything down to bare bone or soil so that something new has room to grow.

Perhaps the most common question asked about Tarot Cards is, "Can the Death card mean a real death?"

Yes, it can. The Death card is about endings, and that includes the ending of a life. What everyone seems to forget, however, is that the Death card is not exclusively about the end of a human life. In fact, it's far more likely that the card is telling you that a goldfish or a houseplant will die. Death can mean the "end" of anything: The end of an era, the end of a trip, the closing of a restaurant, the breaking up of a band, the conclusion of a very rough week.

Any and all of these as well as a million more possible interpretations can be applied to the Death card. So it is foolish to fear it for the fact that, once in a great while, it will let you know that some sick, elderly relative might not be long for this world.

Even more important to remember: the Death card is less about something dying then about how a person deals with endings.

We might be delighted that something is finally over and done with, like a terrible job we hated. Or we might be heartbroken, like over the loss of that poor goldfish. Either way, we require time to come to terms with the fact that something we were used to is no longer a part of our lives.

With Scorpio as its sign, the Death card is as much about transformation as about loss. Scorpio has three forms: scorpion, serpent, eagle. The Death card indicates this transition from lower to higher to highest. In addition, Scorpio is also about sex. So even as something is taken from us, something new is created.

That new thing will not be the same as what was lost, but it will step into that empty space and give us reason to carry on.

The connection of sex and death in Scorpio (the sign stands for both) is a strong indication of what this card is all about. We westerners see "Death" as a frightening card because we often see Death as an end, and we hate for things to come to an end. However, in other traditions, Death is just a natural and important, if sad part of an on-going cycle. In a karmic sense, you die so that you may be reborn. Winter comes so that there can be a spring, and we can only appreciate what we have when we know that there is loss. The Death card signals such things. This is a time of change.

Before or even as this change occurs, however, the querent needs to mourn, cry, and grieve. Wang notes that Death "humbles" all. Which means that we are brought low, feel empty or stripped to the bone. Once we have gone through this low point, however, we will find that there is room for something new, fresh or different to come into our lives. Something that might exult or transform us.

So while a Tarot Reader needs to tell their querent, quite honestly, that they will be going through a time of sorrow and mourning, we can also tell them that this, too, is not forever. Our sadness will end in a sunrise, in a newborn phoenix rising from the ashes of the old.

Learn the Death meaning in reversal in our reversed card meanings. 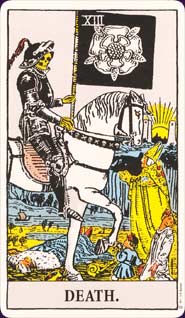 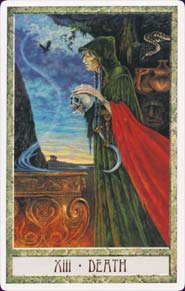 Death in the DruidCraft Tarot
See more images from this deck 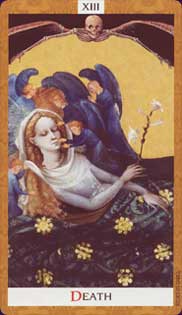 Death in the Golden Tarot
See more images from this deck


Get 15 Free Tarot Spreads Today!
We'll email you our 15-page eBook now, and you'll receive updates and featured decks from us in future.