A smirking young man gathers up swords won in battle from two, humiliated losers. In arguments and battles of ideas there are going to be times when one just loses or has to surrender. The winner seen in this card has clearly been winning fights. Maybe fairly, maybe not, but it is clear that he has some advantage as well as the confidence that no one can beat him.

Pride can make us blind to our own limits and weaknesses. It can lure us into fights we weren't ready for, or weren't equal to winning. Most of the time, we probably knew it was a bad idea, yet we let ourselves be tricked, lured, or goated into fighting. And now we are dishonored.

The Question: "How can I survive this disgrace?"

The Answer: "By learning from it your weaknesses and limits."

Losses like this teach us to know ourselves and be better prepared for the next time. They teach us how and when to walk away from fights, which can often be harder than giving in, and so save ourselves from the greater damage of failure.

Note that this card in the future position can sometime teach this querent this lesson without making them go through it. A reader can say, "Don't let yourself get into a fight with this person, you will lose," and if the querent listens, they will avoid having to learn the hard way how to be strong and walk away from such fights.

Learn the Five of Swords meaning in reversal in our reversed card meanings. 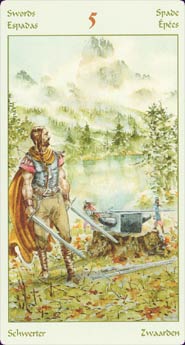 Five of Swords
in the Vikings Tarot
See more cards