Five similar young men with five wands battle among themselves. When you invest energy in a project, you often find that it develops and grows quickly in the early stages, but not in later stages. Like a small company just starting, or someone who runs for mayor of a small town, the lack of serious competition make success likely. But when that company gets big enough, or the little mayor wants to be a state representative, then winning becomes harder. More competition, or just stronger competition makes it harder.

The Five of Wands is about this moment when we find ourselves competing with others who have just as much clout and ambition. It predicts conflict and power struggles, inner doubts and fears. Like an athlete who stands out in high school, yet in college finds that he's not so amazing or special, we can lose our passion and drive to succeed.

This is, as with all the fives, a blow to one's pride. The question: "how can I stand out?" The answer is to over come your fear of competition and be bold. This is not the time to retreat or play it safe. This is the time to pull out all the stops and do something different.

The querent should be advised that they're looking at some stiff competition. The battle may be playful, a test rather than serious, but their performance could make a difference to their future.

Learn the Five of Wands meaning in reversal in our reversed card meanings. 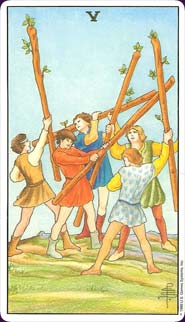