A young man rests on a pallet, three swords above, one under him. Though this card (in the Rider-Waite deck) makes the young man look dead, he is really resting. This is the "meditation" card and it advises the querent that they need to rest, reflect, recuperate and find their way back to themselves. Being that Swords are emblems of fighting, of anxieties and arguments, the stillness of the number four is usually a welcome respite. This is a time for everyone to "put up their swords" and allow wounds inflicted in these mental or verbal battles to heal.


There is a fascinating story behind this image of the young man on the coffin (credit to Mojo for this history lesson): Before knights went off to battle or on crusade they would commissioned a sarcophagus for themselves in case they died. Those that returned safe and sound, if truly chivalrous, would literally lie down in their coffin in a show of humility and contrition. They would meditate on whether they'd been true to their mission, their king and god. Also on how easily they could have ended up in this coffin as a corpse rather than alive and offering up prayers of thanks for being spared.

Thus, this card usually indicates that the querent has survived a time of arguments, misunderstandings, mental or verbal abuse, even a nervous breakdown. They could be recuperating from a physical illness or injury as well. The Four of Swords is that time they need to heal, clear their head, just think about what they did and what they need to do differently from now on.

The suit of Swords takes a much-needed mental breather in this card. It can signal that the querent has retreated, or should be advised to literally or figuratively retreat from what they've been thinking far too much about in order to rest their brain and re-evaluate their position.

Learn the Four of Swords meaning in reversal in our reversed card meanings. 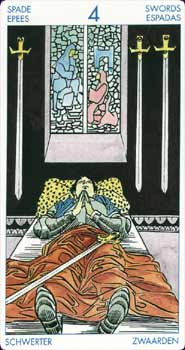 Four of Swords
in the Rider-Waite Tarot
See more cards