As an Adult Man: Call him the "Old Farmer" and his Kingdom is his "business" or farm. Proud and self-reliant, this esteemed gentleman is likely a civil servant, executive, engineer, manager, farmer, health guru or, surprisingly, entertainer. Wherever he is, he worked hard to be in charge and in charge he intends to stay.

He knows he ought to be in charge because he has common sense, a meticulous nature, and the ability to motive others to work hard. It's important to him that the job be done right. And, in fact, whatever he is in charge of will grow steadily, reliably, and abundantly.

No risks or chances will be taken, however. And there likely will be no innovations or changes.

Because he is spare with words, he can seem cold and aloof, but those who get to know him find him surprisingly charming and funny. When he's relaxed he can tell the most amusing tales at the dinner table. And he is, underneath it all, kind and loyal. If you need help, he will help and never ask for repayment. But if you help him, he'll repay you as soon as he can; he doesn't like being beholden to anyone.

He will always provide for his family even sacrifice for them, and he expects them to be equally responsible, hardworking and disciplined. If they are, he'll stick by them through thick and thin. If they aren't, however, they may be deemed lazy and could be disowned, especially if they're odd or different enough to embarrass the King of Pentacles.

Much like his queen, the King of Pentacles wants to be respected by his community, and so is conservative in upholding its values and traditions. He is not impulsive, experimental or artistic-his motto most likely is "if it ain't broke don't fix it." But while he's not against others being experimental or artistic, he dislikes anything or anyone who makes him stand out. Anyone who causes him embarrassment, be they family, friends or enemies, will not be forgiven.

In addition to this stubborn nature, the King of Pentacles can be an odd mix of cheap and spend-thrift, cutting corners and refusing to pay for things he believes should be cheaper like milk, yet spending a great deal on things he believes give him status, like clothes or a new car.

At his best, however, he generates such respect for his hard work, his care, and his innate generosity that those who love him value his approval of their work more than the gold he pays them for it.

Learn the King of Pentacles meaning in reversal in our reversed card meanings. 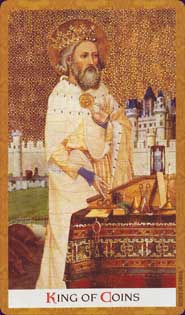 King of Pentacles
in the Golden Tarot
See more cards