As Change and Movement: The Knight of Pentacles is the most opposite to the Air element of the Knights. This means that he is the least Knight-like. Not inclined to move or fight. On the positive, movement and changes will feel steady, as this Knight is very consistent. But Knights are supposed to be fast, and this Knight is plodding. It will seem like things are moving/changing at a crawl, and that those who should defend their positions and put up a fight are taking too long to do so.


As a Teen or "Teen-like" Person: The Knight of Pentacles has all kinds of projects going, jobs on the side, and extra-curricular activities. He takes his work (or studies) very seriously, and is always looking ahead to the future. He likely has, in fact, long term plans, including what he wants to be, what he wants to do, down to getting married and having children. While this seems very positive, it can cause him problems when it comes to handling the unexpected or improvising. If he didn't plan for it, he doesn't know what to do about it.

Similarly, this Knight is uncomfortable standing out. While he wants to have the best that money can buy, he also wants to fit in. Thus, if every one of his peers must have a certain cell phone, he must have it as well. If he can afford the best of these, he will buy the best. If he can't afford it, he will work at part-time jobs till he can afford it. While this gives him an amazing work ethic, it also makes him too reliant on material things to give him status, and may make him embarrassed if he doesn't have enough.

This teen or teen-like person needs to have his own room or secret place, and woe to anyone who goes into that room or changes it in any way. The Knight pf Pentacles has his own organization system for everything, and a routine for keeping healthy. Not surprisingly, this teen can be far too solitary, too concerned with perfection, or earning a place of respect. Fear of failure or standing out may keep him from leaving his room. He needs to "lighten up."

He values and protects beautiful things and is a loyal employee if treated right.

Learn the Knight of Pentacles meaning in reversal in our reversed card meanings. 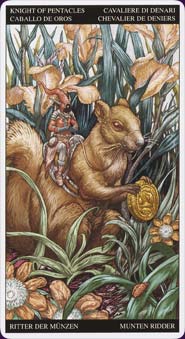