An angel or cupid, a man and a woman, two trees (in Waite, it is Adam & Eve with one tree having a serpent and apples) - in some decks one tree is flowering, but the other has fruit. Also in some decks there is a man standing between two women.

The Fool comes to a cross-road, filled with energy, confidence and purpose, knowing exactly where he wants to go and what he wants to do. But he comes to a dead stop. A flowering tree marks the path he wants to take, the one he's been planning on taking. But standing before a fruit tree marking the other path is a woman. The Fool has met and had relationships with women before, some far more beautiful and alluring. But she is different. Seeing her, he feels as though he's just been shot in the heart with cupid's arrow.

That's how shocking, how painful is his "recognition" of her. As he speaks with her, the feeling intensifies; like finding a missing part of himself. It is clear that she feels the same about him. They finish each other's sentences, think the same thoughts. It is as if an Angel above had introduced their souls to each other.

Though it was his plan to follow the path of the flowering tree, and though it will cause some trouble for him to bring this woman with him, the Fool knows he dare not leave her behind. Like the fruit tree, she will fulfill him. No matter how divergent from his original intent, she is his future. He chooses her, and together they head down a whole new road.

New readers often ask, "What is the Lovers' card about? Is it about finding love?" Yes, and no. It is possible that the original name of this card was "Love." The oldest decks call it "The amorous one," The Lovers being a mistranslation. So really, it's about one person being "in love" with someone or something.

Many books, however, define the card not as "Love" but as a "choice." And the images that have been used for this card make it even more confusing. The original trump featured a man and a woman with a cupid above them about to shoot his dart (into which? Cupid's arrows only make the one they strike fall in love). Later decks had a man choosing between two women, or a man meeting his true love with the help of a matchmaker. Still later, with Waite, we have an Angel above Adam and Eve. The Angel stands for Raphael, who is emblematic of Mercury and Air, with Adam and Eve related to Gemini (sign of Mercury) in that Eve split from Adam and is, essentially, his twin.

And the fruit from the Tree of Knowledge indicates Adam and Eve choosing to "know" each other in every sense of the word.

This connection to Gemini means that the Lovers card is NOT about "romance" or passion. Romantic emotions are typically related to water. And blazing passion is associated with fire. Gemini, an air sign, is about messages and making contact. It's about the psyche.

In addition, at #6 the Lover's card is about "harmony." Thus, it is about something that speaks to you, that you "know" and recognize as your other or mirror self (twin), and which makes you feel harmonically balanced or complete. You may experience this psychic attraction to something small like a pair of shoes you have to have, or a rock band whose music says all you ever wanted to say. Or you might be drawn to something huge, a plot of land you want to own, or someone else's boyfriend/girlfriend who, at first sight, makes you think: "That's my husband/wife."

In interpretation, the card indicates that the querent has come across, or will come across a person, career, challenge or thing (a puppy, a car, a house) that they will fall in love with. They will know instinctively that it was meant for them, even if it means diverging from their chosen path (that is the "Love" part). On the other hand, their common sense must also make a decision on whether or not to go along with this psychic "choice." There is often a measure of hardship or cost that comes with giving into this spiritual attraction.


Thirteen's Observations on the Lovers

The Lovers' card often confuses readers as its most common interpretation is about making a choice. If we examine it closer, we see this does go along with the name (or mis-name of the card). Two choices are involved with the card. First, your soul or psyche is making its choice. It recognizes this other person/thing as being your spiritual twin or as harmonizing with you; you become "amorous" for it.

Now the rest of you, the demands of your life, your emotional heart, passionate soul, can agree or not. That's the other choice. You will feel powerfully drawn to this career, challenge, person or thing so much so that, no matter how scary, how difficult, irrational or troublesome, you will be inclined to go for it. This is LOVE. But you will also know that it comes at a cost. Maybe the person you're attracted to isn't a romantic and your dreams of a wine-and-roses love affair can't be. Maybe they don't set you on fire and you can't have the passion you want. Or maybe this thing/person is just inconvenient.

Your friends and family may also weigh in. They may think you're crazy, may argue with you not to get involved. You, yourself, might think its madness to change your life or break with your community in order to have this. Coming after the Emperor with his imperial rules, and after the Hierophant with his communal faith, The Lovers acknowledges a spiritual power that often defies earthly laws and religious traditions. Obeying this urge can be foolish, dangerous, selfish, thoughtless, earth-shattering.

Yet you can say "no" to this attraction. You do have that choice. If, however, you don't allow yourself to try and make this person, career, challenge or thing a part of your life, you may regret it, profoundly and forever.

Learn the Lovers meaning in reversal in our reversed card meanings. 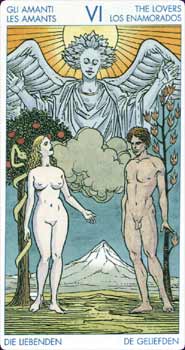 Lovers in the Universal Tarot
See more images from this deck 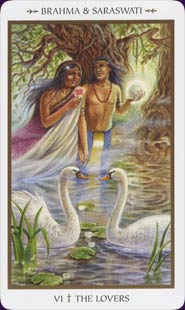 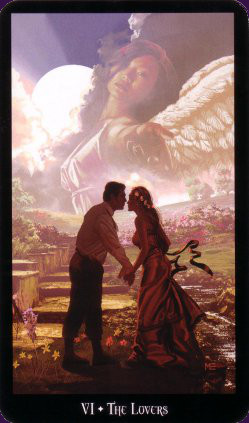 Lovers in the Witches Tarot
See more images from this deck