A man defends himself with one wand against six others. This is the "under siege" card. The stakes are high, and the querent is under attack; even worse, the odds are against him. This is where the energy you've been using to create must be used to defend what you've created.

Usually this card indicates a disagreement with how you are directing and managing your career, criticism of a philosophy, or a schism in the religion. Those who you gathered in, who were your supporters are now at odds with you. They think you're in error and that someone else could do better. They want you to step down.

And so you're on the defensive, fighting to regain control. The card urges you to stand your ground. The reader can tell the querent that though his enemies seem stronger, they don't expect resistance, and his fighting spirit will daunt them.

This card tells us to use what we've learned about maintaining our energy, about being bold and stalwart and we will win the battle.

Learn the Seven of Wands meaning in reversal in our reversed card meanings. 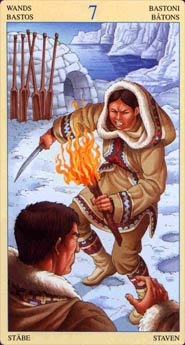