On the bleak landscape where the Tower stood, the Fool sits, empty, despairing. He hoped to find direction on this spiritual journey, a path to his spiritual self, but having just learned that most of his life was a lie, he now feels lost. Sitting on the cold stones, he gazes up at the night sky wishing for some kind of guide. And that is when he notices, nearby, a beautiful girl with two water urns. As he watches, she kneels by a pool of water illuminated with reflected starlight. She empties the urns, one into the pool, one onto the thirsty ground.

"What are you doing," he asks her. She looks up at him, her eyes twinkling like stars. "I am refilling this pool, so that those who are thirsty may drink, and I am also watering the earth so that more fruit trees will grow to feed those who are hungry." She nods back to a single fruit tree that stands nearby, a nightingale singing amid its branches.

"Come," she invites. "Sate your hunger and quench your thirst."

The Fool plucks some fruit from the tree, then kneels by her and drinks from the pool. The water tastes wonderful, like liquid starlight, and the fruit is equally delicious. Both help to heal his wounded heart.

Having quenched his thirst and sated his hunger, the Fool lays back to gaze up at the stars. "They're so beautiful," he said, "but so distant."

"Like possible futures," agrees the girl. "Cool and distant. Yet if you keep one in sight, it can guide you to your destination no matter how far away it is." Even as she says this, she began to fade away, like dew, vanishing. All that remains is a gleam that was at the center of her forehead. This rises up and up, until it settles in the night sky as a shining star. "Follow your star," the woman's voice seems to sing from that light, "and have hope."

The Fool takes in a breath and rises. It is a dark night, a desolate land. But for the first time, he has a guiding light to show him the way. Distant as it is, it restores his faith.

With Aquarius as its ruling sign, The Star is a card that looks to the future. It does not predict any immediate or powerful change, but it does predict hope and healing, even unexpected help to offer us sustenance in bleak times.

Thus, the card says that there is aid and assistance out there to help us though hard times, like organizations that offer food and shelter in the wake of a terrible flood or fire. This assistance might, to us, be a friend or counselor, an uplifting book or music, anything that appears in our life and heals our wounded spirit. More, the card tells us that we can achieve what we most want to achieve, like flood or fire victims wanting to rebuild. This future, however, won't be growing to full size overnight like Jack's Beanstalk. It will take time and we must not lose sight of it.

This may seem like cold comfort. No one wants to hear that the person they're interested is not interested in them, but will be in the future. Or that they will not succeed today, but will later on in their life. Still, it is there, a glimmer of light in the darkness. The question is, do we feel it's worth waiting for or not?

That is the question the Star makes us ask ourselves: What do we want bad enough that we will go the distance for it? The answer will tell us as much about what we are as what we could be.

Thirteen's Observations on the Star

The Star is one of those cards that almost everyone loves. It is often the most beautiful card in the deck and its image suggests the peace and harmony of its meaning.

While this card offers hope and possibilities, however, the reader must remember that these are in the distance. Only a time of healing and peace, like the oasis of water before the Star, are in the now. Like Aquarius, the card's vision is for tomorrow. This means that if the querent is seeking love, a career, fame, wealth or even spiritual enlightenment, they can only be told that it is a possibility. It is not going to happen anytime soon. But if, like a ship navigating its way, they keep the star in their sights, they will eventually reach that other land they're seeking.

The Star offers no guarantees, of course, that the traveler won't tire and give up or be lured in another direction. And there is no telling what obstacles they'll encounter along the way. All the Star promises is that a particular future can exist.

The Star offers peace and healing and a glimpse of the future. It is up to the querent to decide if they are willing to go after that future, no matter how long it may take them to get there.

Learn the Star meaning in reversal in our reversed card meanings. 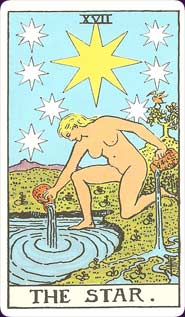 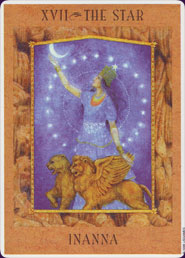 Star in the Goddess Tarot
See more images from this deck