An angel (often female or genderless), a pool or river of water. Two cups or beakers, a fluid flowing between them.

Recovering from feelings of loss at last, the Fool begins to wonder if he will finally find the new spirituality he's after. It occurs to him that so far, he's been dealing with opposites: the two opposing sides of the scales (Justice), the material and spiritual (which he hung between as the Hanged man), death and birth (the one leading into the other in the Death card). Does one always have to be surrendered to get the other? he wonders.

It is at this point that he comes upon a winged figure standing with one foot in a brook, the other on a rock. The radiant creature pours something from one flask into another. Drawing closer, the Fool sees that what is being poured from one flask is fire, while water flows from the other. The two are being blended together into a completely different substance!

"How can you mix fire and water?" the Fool finally whispers. Never pausing the Angel answers, "You must have the right vessels and use the right proportions."

The Fool watches with wonder. "Can this be done with all opposites?" he asks. "Indeed," the Angel replies, "Any oppositions, fire and water, man and woman, thesis and anti-thesis, can be made into a unified third. It is only a lack of will and a disbelief in the possibility that keeps opposites, opposite."

And that is when the Fool begins to understand that he is the one who is keeping his universe in twain, holding life/death, material world and spiritual world separate. In him the two could merge. All it takes, the Fool realizes, is the right proportions, the right vessel and enough faith that the two can be unified.

It is hard, at first, to see where Sagittarius, the ruling sign of this card, fits in. Sagittarius is an expansive sign and we often identify Temperance with abstinence. Temperance, however, really means moderation. Thus, you don't give up wine, but rather cut the wine with water.

There is, however, another angle to the card, that of "tempering" or transforming-thus we continue on from Death, which prepared us for transformation. With tempering, iron is transformed into steel with heating and cooling, fire and water.

Similarly, Sagittarius, the centaur, is another one of those creatures that merges beast and man into something unique. Yet not so unique as men and horses have often "merged" together, the one on the back of the other to form a unit. And then there is the bow and arrow, one moving, one stationary, working together to point the way. Temperance may be, at first glance, a warning to "temper" your behavior, but it may also be a reminder that seemingly irreconcilable opposites may not be irreconcilable.

Sagittarius is a sign of optimism, philosophy, and taking risks. This card urges the querent to have faith that they can merge fiery red and watery blue into otherworldly violet. But they will need to experiment, have confidence, and try, try, again.

In many ways, this card is about the Sagittarian desire to find a unified field theory, a way of blending opposites, achieving synthesis. Crowley calls the card: "Alchemy" and that might well be the best definition for it. In fact, it sometimes works best for me to imagine the Angel wearing a lab coat and very carefully pouring measured amounts of colored liquids into beakers rather than cups.

One thing to remember is that Temperance isn't about surrendering either the water or the wine. It is about mixing things until you get exactly what you want, which is usually a perfect blend of the two.

In a reading, this card often represents a situation where the querent can't get opposites to "blend" together (choices, belief systems, families, friends) and may feel that they have to give up something. Temperance tells the querent that they don't have to do that. It says that a synthesis can be achieved if the querent is willing to keep on trying, experimenting, and adjusting the amounts. The Querent might, for example, be trying to merge two full families when blending has to occur bit by bit with individuals. This is where the "moderation" message comes in. Try to make your ambition more realistic and you might well achieve it.

The card is also a reminder that a bow and arrow are useless apart, but together a formidable weapon. This card tells the querent that they CAN and should put thesis and anti-thesis together to get the even more useful synthesis. But it will take time, care, patience and experimentation. And, yes, moderation.

Learn the Temperance meaning in reversal in our reversed card meanings. 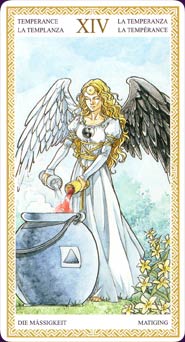