A man, woman and child are stepping through the portal to the grounds of a castle. Outside sits an elder in rich robes patterned with grapes, petting one of two dogs. The old man, it appears, is passing on his wealth to the next generation-the man and woman-and, though them, to the generation after that in the form of the child. Thus we see both the mundane use of the Pents (a beautiful home) and the spiritual use (providing for others).

Crowley calls this card "The Lord of Wealth." This is a card about having an abundance of something, so much so that you view it differently than when it was a rarity. Note how the elder sits outside while the couple and child are on their way in. The castle is nothing new or special to him. He values, instead, his time outdoors with the dogs, and takes enjoyment from how the castle delights the young couple and the child. The elder is also the living version of the castle, as rich and regal, and the card seeks to remind the viewer that as there is value in the grand old castle, so there is value in the grand old man.

In meaning, this card is about a pinnacle in prosperity: a family home bought and paid for, a business that can be passed onto one's children. It can indicate someone's retirement, dealings with elderly relatives, genealogy, or inheritances-large or small. It can be about antiques and other old, valued things passed down through the generations.

On a simpler level, the card can indicate passing things on, like removing all those old clothes cluttering up the closet and giving them to the homeless, surrendering that collection of stuffed animals to a children's hospital or clearing out books from the overflowing bookshelves and handing them over to a local library. Though similar to the Six of Pentacles, this is not so much about generosity as it is about using your abundance (wealth) to leave a legacy. "You have too much to enjoy," the card says. "Give it to those who can enjoy it." This could also indicate volunteer work if you find yourself with too much time on your hands.

Learn the Ten of Pentacles meaning in reversal in our reversed card meanings. 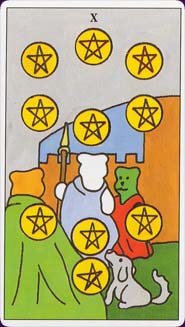 Ten of Pentacles
in the Gummibear Tarot
See more cards