A man dead with ten swords in his back. There are cards in the tarot that can scare querents and this is one of those. Readers should remind their sitters, however, that Swords refer to the mind and communication, not murder.


When, like the Wheel, thoughts come back around to the top carrying with them all past discussions, arguments, analysis and attempts to solve problems, they also come to an end. There is no more left to know about the subject or say about it. Dramatic and frightening as this image is, it essentially says that any path your mind could go down has been gone down; any discussion you could have on this topic has been discussed.

Of course, the image doesn't just portray a death, but a murder and a brutal one at that. Stabbed in the back. The words and thoughts of others can stab you in the back, murdering your theory, idea, reputation. Any of these may be the victim portrayed in this image, but there is a positive. The worst has been done. And new theories, ideas and even reputations can be found.

When the querent gets this card the advice is that it is time to end whatever has been on their mind, or whatever issue they've been arguing or discussing. They have gone as far as they can with these thoughts or argument. Even if they could argue more or differently, everyone is tried of listening to them. It is also likely that dwelling on this issue has left the querent's mind weary, dull, dead. It is time for a new topic that will enliven the mind rather than keeping it pinned to the ground.

Learn the Ten of Swords meaning in reversal in our reversed card meanings. 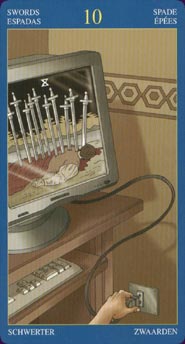 Ten of Swords
in the Gay Tarot
See more cards