Ah, the dreaded Three of Swords. Three swords pierce a heart. Against the background of a storm, it bleeds. This card often relates to love-triangles, but remember this is an air sign, so what wounds the querent is not an action, but something said to them, or read by them. There is a strong possibility that a secret has finally come out.

A reader may wonder how this differs from The Tower, which is about a similar reveal. The Tower reveals that something you were passionate about is false, and that is most important. With the Tower, the querent had no idea, none at all, that what they thought was true was not true. They believed it heart and soul.

With the Three of Swords, the querent usually senses that something is up even if they don't know what. A friend has been avoiding you, perhaps, or making strange excuses. Something is up, but no one will say what. It feels like everyone is keeping something secret from you. And you may even have your suspicions of what.

The Three of Swords indicates that it's going to finally come out. It will be hurtful, the words sharp, piercing. "I don't like you," or, "I want to break up," or "I'm in love with your best friend" (ouch!). But it will not be a bolt out of the blue. It may even be a relief to finally know. No more waiting, obsessing, wondering, worrying about what could be wrong. This cutting truth, however bitter and painful, allows all that tension and uncertainty to finally drain out. The querent knows how things stand, the truth about how they're seen by others. This development allows them to move on.

Learn the Three of Swords meaning in reversal in our reversed card meanings. 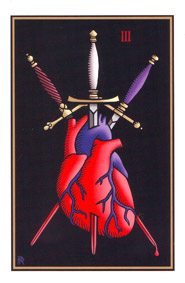 Three of Swords
in the Rider-Waite Tarot
See more cards