A man with two wands, holding a third, looks out to sea, waiting. Sometimes there are boats on the horizon. This is the card of "waiting for the ships to come in."

The person has invested their passion in something - a new career, a big move to a new city (remember wands signify travel as well), maybe they've even thrown their hat into a political ring - and now the energy they sent out is coming back to them. It is a card of progress, of the first hint that the dream can be made real.

This card also indicates that, like a woman holding her new born babe in her arms for the first time, or a politician hearing that the first round of votes are for him/her, the querent might rightly be feeling a little proud, even powerful. They might be warned, however, to not get too excited. Though there is a sense that positive results are coming in, they should wait till the ships have all appeared and docked before celebrating or boasting.

Learn the Three of Wands meaning in reversal in our reversed card meanings. 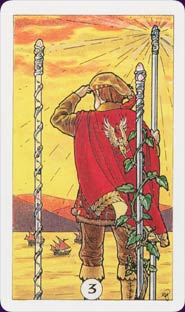