The Housewives Tarot is a kitschy "domestic divination deck" packaged in a mock recipe box. The artwork is thoroughly fifties in style, attitude, furnishings, and fashion. It's a light-hearted gift set for the complete Tarot beginner, or a novelty deck for the more experienced reader or collector.

Reviews of the Housewives Tarot

Card Images from the Housewives Tarot 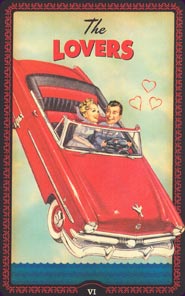 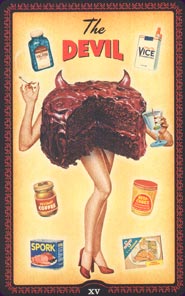 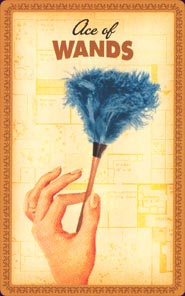 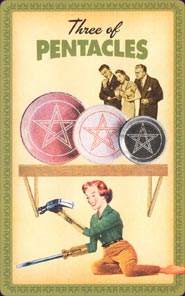 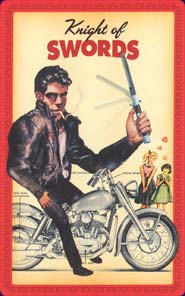 The Housewives Tarot comes in as a mock recipe box, with 78 cards. It's a domestic divination deck, a light hearted gift set for the Tarot beginner or a novelty deck for the experienced. The art work is from the fifties style, and makes it a must for the collector.

According to the booklet, the Housewives Tarot was introduced by Marlene Louise Wetherbee in the early 1950s. She was a happy little homemaker who had a devoted husband, obedient children and a spotless home. She was always in fashion, made the best recipes, and had a fare of womens intuition. (I suspect she also had a strand of real pearls.) One day while playing bridge with some of the neighborhood gals, Marlene decided it was the right time to reveal the secrets of her success. She removed a mysterious Tarot deck from her fashionable pocketbook. Oh my every one was appalled that Marlene would dare bring such an item to a bridge party. But she knew that this kind of resistance was to be expected. As stories go, Marlene laughed and asked. Hasn't anyone wondered how I can keep my kitchen spotless? Or how I make a perfect cake every time?

Marlene supposedly became known as the mystical Madame Marlena and word spread far and wide about her powers of domestic divination. Housewives seek her out. Her talents were in such demand that Marlene decided to go into business for herself. How did Marlene acquire this mystical knowledge? Know one will ever know for she took the secret to her grave, bless her little heart. The origins of the Housewives Tarot shall be shrouded in mystery forever.

These cards are my inspiration, whenever I have troubles or question they help me sort things out. The cards invite you to take a look at yourself and your life, to motivate you and they may provide clues for you, but they can not give you direct answers to all of life's problems. These are quite powerful cards and at times posses uncanny knowledge they will surprise you. They can empower you to find your own answers and to inspire you to make your own future.

The Major Arcana cards represent various figures of inspiration and influences of the housewife on her long journey through romances, conflicts, trails and tribulations of her suburban existence.

The Minor Arcana depicts specific situations and occurrences in the Housewifes journey and is divided into four suits:

Cups which deals with the ups and downs of love, relationships and anything emotional.

Wands concern growth and taking an active role in your destiny. All you need is a little elbow grease to get things done. But there may be a finger nail or two that get broken on the way.

Swords tackles the troubles of the mind, quarrels, conflicts and aggression. They can represent mental breakthroughs as well as nervous breakdowns.

Pentacles this deals with money matters, possessions, careers and everything real and tangible.

So put your pearls on, the crisp white apron and high heels then go check out this deck so you can bring a little mystery to the next bridge game.

‘Guaranteed by the Housewife Occultists of America’, so the booklet explains ‘The Secrets of Domestic Empowerment’ offers a 1950s style comedy tarot deck. There are five suggested spreads; The Virgin, The Neapolitan, The Dinette, The Closeline of Life and The Martini. The backs of the cards are red gingham tea towels and we are offered recipe’s for a Madame Marlena’s Mystical Martini, Divinated Eggs and an Ice Box Fortune Cake to accompany a retro evening of card reading. I thought I saw this deck being used in the film ‘The Help’.

The deck depicts dinner plates as pentacles (which “deal with money matters, careers and possessions – everything real and tangible. You may find yourself admiring all you’ve worked so hard to attain, or watching in horror as it slips through your fingers and crashes to the floor”). Cutlery and scissors as swords (these tackle “the troubles of the mind, quarrels, conflicts and aggression. They can represent mental breakthroughs as well as nervous breakdowns”). Tall stemmed glasses as cups (which “deal with the ups and downs of love, relationships, anything emotional. This suit is usually brimming with joy and happiness, and teaches you to pour your troubles down the drain”). Wands as brooms (which concern “growth and taking an active role in your destiny. A little elbow grease is all you need to get things done, but a nail or two might get broken along the way”).

We are introduced to the Legend of Mystical Housewives Tarot, where, according to local gossip of the time, Marlene Louise Wetherbee showed this deck to her bridge partners. Inside the card index box, we find the cards that depict middle class America in the era of the 1950s.

Four of Cups shows us a housewife with coiffured hair, wearing a blue tailored dress with matching kitten heeled shoes. Three glasses are empty, one full of iced martini with a cocktail cherry on a miniature metal sword stick. The booklet provides three key words: Boredom, Overindulgence, Ennui. The card interpretation: An intoxicated housewife stumbles back from a foolish binge. Another glass is offered to her, but she wisely refuses it. The Four of Cups warns of overindulgence, whether it is in matters of the heart, the home, or the bottle. Too much of a good thing leads to boredom – or worse, rehab! Change, not escape is the answer.

The retro era is very popular with young people today. It reflects a time of greater certainty when surburban couples aspired to the ideal life in which to raise a family after the insecurities of the financial crash of the 1930s and the second World War. A husband’s regular and routine job provided a house, a saloon car and leisure time and a wife was a home-maker, buying ease-of-life gadgets to keep the home neat, children happy and the meals interesting. Many look back with nostalgia. However, the card deck reveals an element of laughter and questions a life of complete domesticity, The Hanged Man for instance shows a pinafored woman hanging a man by his feet with clothes pegs to a washing line, alongside her pink, lace trimmed knickers. This deck will be enjoyed by those who think today offers greater opportunities and pleasures than yesterday!