Published in the mid seventies, and unfortunately now out of print, this brilliantly coloured Balbi Tarot deck makes use of astrological, alchemical and Qabbalistic symbols in its major arcana. (The minors are standard pip cards.)

Reviews of the Tarot Balbi

Card Images from the Tarot Balbi 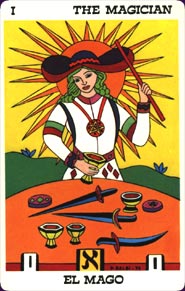 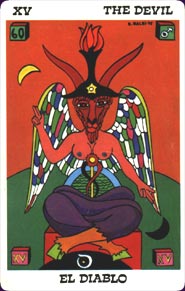 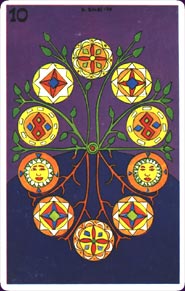 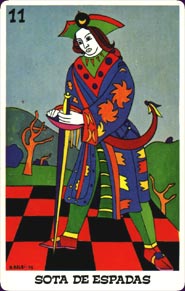 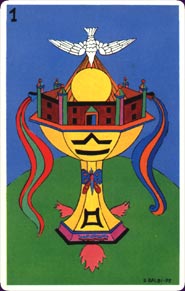 The Tarot Balbi found its way to me serendipitously when we helped out a friend by taking a vanload of "junk" to the tip! The deck was brand new and I was delighted to add it to my collection!

Created by Italian artist Domenico Balbi, who is, I gather (from the short background given in Spanish), a specialist in metaphysics and parapsychology, this bilingual deck deserves to be more popular than it presently is. The brightly coloured cards incorporate astrological and alchemical symbols as well as Cabbalistic lettering and are an endlessly interesting.

Balbi's use of colour is unconventional and fascinating! The Magician has flowing green curls, purple and blue trees and shrubs are dotted about colourful landscapes, and horses with pink, blue and green manes go flying by. Another odd feature of the artwork is that whilst all the characters are dressed in intricately designed brightly coloured clothing, their faces and hands remain uncoloured, executed simply in black and white. Such is Balbi's mastery with colour that these eccentricities do not jar on your senses as you might expect, and actually enhance the visual appeal of the cards!

Apart from his green hair, the Magician stands before a table on which there are 3 swords, 2 pentacles and 3 cups. He holds another cup and a single red wand.

The Devil has lime green hooves, blue nipples and wings of yellow, blue, pink, red and white. A caduceus is painted on his/her solar plexus.

The Fool's clothing incorporates every possible colour and he wears mismatches black and white shoes.

The Star shows a red-haired female who pours water and fire from ewers embellished with flowers, whilst in the background a scarlet bird rests in one of many purple trunked trees.

The Temperance angel is dressed in yellow with white wings. She pours rainbow coloured water from one colourful pitcher into the other, and a sunflower decorates her Ajna Centre.

The Moon is an eerie card in which deep purple wolves with green eyes howl at a full moon, with a crescent moon superimposed on it. Reflected in the turbulent water below, the crescent moon is shown as blood red.

The Hermit is dressed in orange and red and walks on a lilac coloured road, by which a huge tree with a purple trunk is growing.

There are numerous unusual aspects to every brilliantly coloured card, too numerous to detail them all. Suffice to say that the fascination of these cards is endless, every time I look at them I discover something new.

The Court cards are labelled in Spanish only, but are easily identified as the traditional page, knight, queen and king. They all wear multi-coloured elaborately designed clothing whilst their faces and hands remain uncoloured. I notice that Balbi has chosen to portray the Swords court characters somewhat differently to tradition. Whilst all the other pages are obviously chidren, the Page of Swords is a young man. Clad in a gorgeously detailed frock coat, he has a crescent moon on his hat, and stands on a draughts board. The Knight of Swords has a sun sign on his breast, and the Queen has the Zodiac symbol for Cancer on hers, whilst the King stands on a crescent moon. Other unusual features in the court cards are the Knight of Cups riding a blindfoded horse, and the Page of Pentacles whose tights have different coloured legs ending in mismatched shoes.

The imaginative and striking Minor Arcana is numbered in Arabic numerals from 1 through to 14 (inclusive of the court cards), and in keeping with the Marseille style, they are not labelled.

The Cups are pretty cards with bright hovering butterflies and flowering vines. The Wands are red and yellow striped batons with flames around them, until you read the court cards where they become sturdy branches in various stages of growth. The Swords have pommels with intricate designs and colours, whilst their double-edged quality is emphasized by dividing them down the middle, one side black, the other yellow. The Pentacles are complex mandalas which incorporate astrological and alchemical symbols, and are further enhanced with trees, flowers and vines.

All the backgrounds are divided by a downward curve with one colour above and another below. Just when you think that each suit is identifiable by the common background colours, Balbi throws in one or two that are at variance from the rest!

All the cards are bordered in white, and in the case of the Major Arcana the title appears in English in the top border, with the Spanish translation at the bottom. Roman numerals are shown at the top left or the border, and are also incorporated into the design of each card. The cards themselves are a standard size, easy to handle and are well-finished with a semi-gloss coating.

This is probably not a particularly good deck for beginners. There is no accompanying book and the Marseille style non-illustrated Minor Arcana definitely calls for some familiarity with standard meanings. Instead of the usual accompanying booklet, there is a folded sheet of paper which gives brief descriptions for each card. More emphasis is placed on the major cards, with explanations of the symbolism contained in them, including Hebrew letter correspondences. The Minor Arcana is dismissed with brief keyword descriptions in classic Marseille style.

An attractive and unique deck, better suited to the experienced reader.