Tarot of the Gnomes

The Tarot of the Gnomes is a popular Tarot, cute, amusing and quirky, featuring tiny rotund and buxom gnomes. All of the cards are illustrated and feature a keyword for beginners.

Reviews of the Tarot of the Gnomes

Card Images from the Tarot of the Gnomes 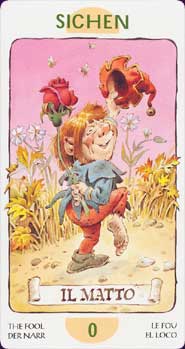 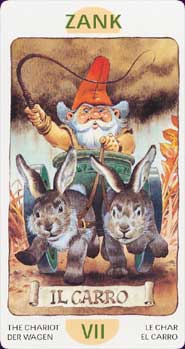 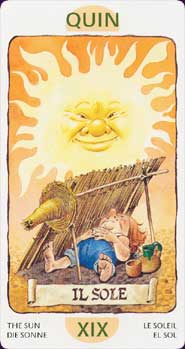 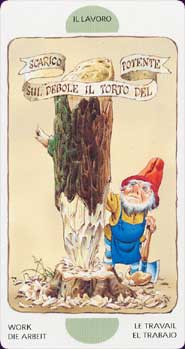 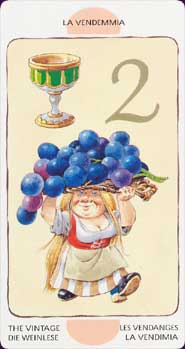 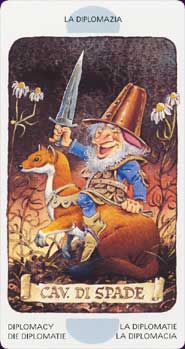 Tarot of the Gnomes Review by Terri Clement

I mean ~ replied Alepos ~ that each of us has its own path which leads to Ketra (the perfect world) but its not reached on foot. ~ Excerpt from the Little White Book

The Tarot of the Gnomes at first glance appears to be a fluffy deck. The minute you open this deck you will be greeted by playful, fun Gnomes. You will soon realize that there are also a few Gnomes that have a bit of a darker side.

Upon further examination you will find that these quirky little creatures are much more than they appear. The Gnomes display quite the same emotions that humans do; from joy and gentleness to anger, laziness and greed. You may notice that the female Gnomes are the backbone of their society. The Gnomes may be small in size but they definitely can weave a beautifully crafted story, filled with great wisdom.

The Little White Book details the (Major Arcana) story of Sichen (The Fool) and his travels through the world of the Gnomes. This story provides a bit of the background and are a must read. The names of the Majors come from Hebrew tradition.

Each suit of the Minors is considered a family bound by their own creed. The Minor section of the LWB does contain a few typographical errors (the 6 and 7 of Pentacles; keywords and meanings are reversed). If you can overlook these small errors, you might find that the LWB provides a few additional insights to the lives of these little creatures and may help with interpretation. There is a great section in the LWB about Fable Reading, which is designed to open the imagination, as well as teaching some valuable lessons. This Fable Reading can be done as a group activity, if desired.

Strength is card number 11 and Justice is 8. The Court cards are King, Queen, Knight and Knave. You will find the deck measures a bit narrower and taller than standard. The back of the deck is done in a green pattern showing mirrored images of the 9 of Chalices, making this deck user friendly for those who use reversals.

The Chalices are the family of abundance. He who drinks all, will have an empty cup.

The Wands are the family of diligence. The faults of the powerful become the burden of the weak.

The Pentacles are the family of success. I glitter for the rich man but delude the foolish.

The Swords are the family of law. I am of little value to those who know not how to use me.

A great all around deck, from the young, novice to advanced readers. The Tarot of the Gnomes is a fantasy deck, making it a wonderful deck for the intuitive reader.

Similar Decks to Tarot of the Gnomes

Home > Decks > Tarot of the Gnomes