The insight to your question about your love and romantic life, and the man or woman in your heart, lies below. First, observe the symbols and images in your tarot card, then slowly take in the wisdom in your reading. 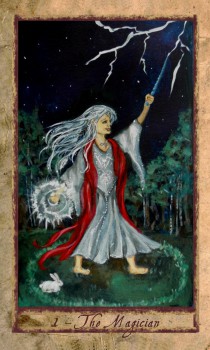 The Magician is the male power of creation, creation by willpower and desire. In that ancient sense, it is the ability to make things just-so by speaking them aloud. The four suits laid out before him remind us of the four aces, which in the Tarot symbolize the raw, undeveloped, undirected power of each suit. When the Magician appears, he reveals these to you. You may be given a vision, an idea, a magical, mental image of whatever it is you most want in your love life.


Get 15 Free Tarot Spreads Today!
We'll email you our 15-page eBook now, and you'll receive updates and featured decks from us in future.