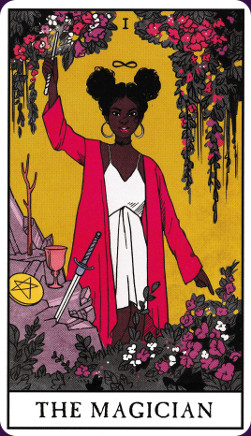 The Modern Witch Tarot has 78 youthful, all-female, contemporary cards. It has inclusive and diverse illustrations of all kinds of women, femmes, and the gender fluid, wearing modern fashion and up-to-date styles, yet keeps the flavour of the Rider-Waite imagery. 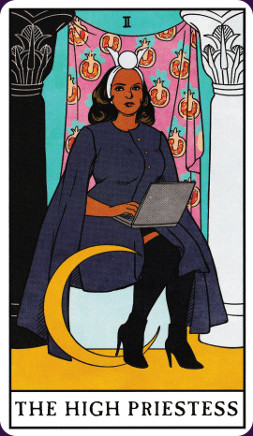 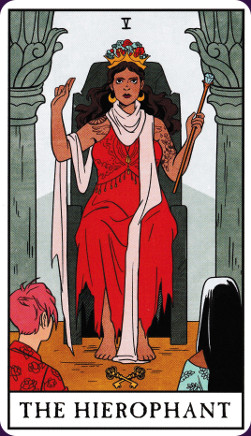 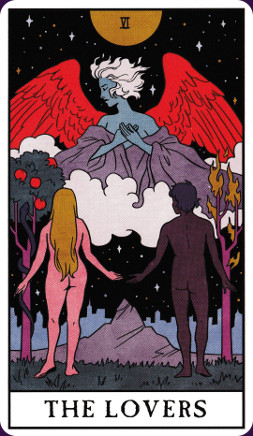 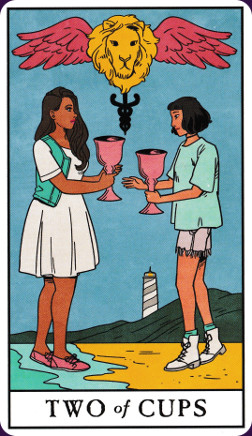 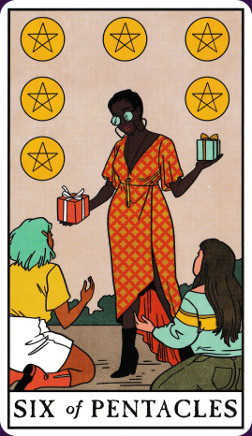 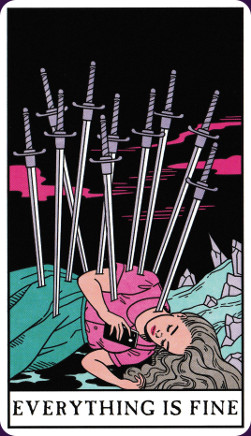 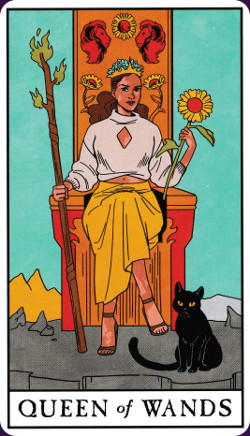 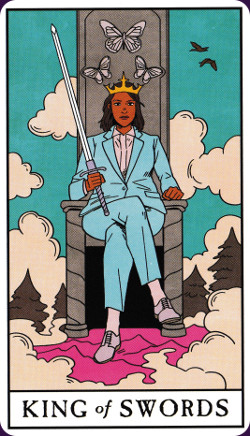 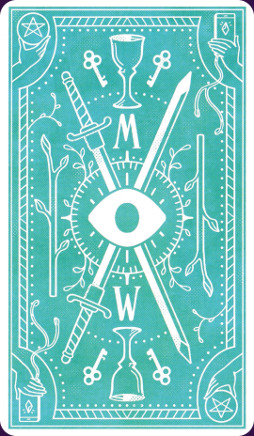 The Modern Witch Tarot is an energetic deck based on the classic Waite-Smith Tarot. It is not traditionally ‘witchy’ (pointy hats, wands etc) but rather is aimed at modern witches. Modern witchcraft has something of a reputation for being inclusive and thus inviting to people who often find themselves marginalised. This deck is a champion at representing people of colour, LGBTQA and femmes, the young, middle aged, and mature; which does not preclude its use by cis women (and male allies) – such is the clever imagery of the Modern Witch Tarot. Superficially the deck appears to be quite simple, but it is deeply complex, offering many possibilities of the human experience. At first glance the deck seems to be top-heavy with the female imagery, but gender/identity is depicted across the spectrum, with traditionally masculine elements represented in such a way as to be open to interpretation.

The Modern Witch Tarot has a traditional structure – it is fully illustrated and consists of 78 cards plus 1 that the Seeker can choose to include/exclude according to their taste or mood. The Major Arcana has 22 cards, the Minor Arcana has 57 cards. The extra card titled Everything Is Fine is identical to the 10 of Swords, and though no divinatory meaning is assigned to it, presumably its title says it all. Or, it can be used to replace the 10 of Swords itself. The Minor Arcana is divided into four suits – Wands, Cups, Swords, and Pentacles, with 10 number cards and 4 Court cards. The Court cards are Page, Knight, Queen, and King. The Major Arcana follows A. E. Waite’s structure and titles. There is also a top card with a sassy message from the deck’s creator – leave it in as a wildcard or leave it out altogether, your choice.

The cards measure 70 mm x 120 mm, which is a fairly standard size for tarot cards, they are neither overly long nor particularly broad. The card stock is noticeably thick and heavy, with very little flexibility. This has resulted in a noticeably thick deck which some users may find to be quite a handful. The finish on the cards is super smooth, with a high gloss finish which makes the cards quite slippery and (in spite of the density of the deck) easy to shuffle. It should be noted here that some decks with high gloss finishes are prone to peeling, so if you are heavy-handed with your cards you may wish to exercise a little caution

when shuffling this deck. The print quality is excellent. This style of artwork is unforgiving when it comes to printing mistakes making the quality control here all the more impressive. The images have crisp and precise lines, and the colours are solid, without bleeds or blurring.

Artist Lisa Sterle’s style is a charming intersection of popular and graphic art. This is exacting line work, with little shading, and block colours - it requires flawless execution and this deck has it in spades. She uses Waite-Smith imagery shorn of some of the old-fashioned (some might say fussy or busy) details, and updated to reflect 21st century life. While some might see it as being somewhat akin to 'comic book’ art, the images don't have the tedious homogeneity of comics – every character depicted is unique with subtle details defining their appearance and expression.

Sterle uses a broad palette of solid colours that echo Pamela Coleman Smith's - bright blues and yellows, mustard and tan, candy pink, coral, and dove grey. As with the Waite-Smith deck the images are contained with a narrow black frame and white borders, and the titles of all cards are given beneath the illustration, black print in a white rectangle.

The image on the back of the cards includes an all-seeing eye, a compass, symbols of the suits, and other esoterica. The image is balanced and symmetrical and therefore reversible.

The cards come packaged in a solid upright box with a slide-off top/lid. The cards and their accompanying guidebook fit snugly inside. The box is predominantly white and printed with images from the deck, as well as a brief descriptor of the Modern Witch Tarot, and publisher’s details. The bottom half of the box is black and printed with an MW ambigram. Showing a lovely attention to detail the inside of both the lid and base box are lined with a white on black design of magical symbols. This is a solid box designed to protect the cards and guidebook within it and as such it can be slipped into a backpack or shoulder bag without taking up too much space. However it should be noted that it is still a cardboard box and eventually will sustain damage if it is treated roughly.

The guidebook, written by Lisa Sterle, is a neat little hardback of 56 pages. The endpapers feature the same white on black print that lines the card box.

From here we move straight to the Major Arcana – each card has its own page with a small black-and-white reproduction of the card as well as a description of the action taking place, and a divinatory meaning.

The Minor Arcana receives a little less attention, there are no images or descriptions of the card, just the interpretation. It should be noted that there are no reversed meanings given for either the Major or Minor Arcana.

While the wording of both the descriptions and the interpretations is modern, the divinatory meanings are not radically different to traditional meanings so much as updated and appropriate to 21st-century living. The advice given has a generally positive outlook but does not shy away from the less pleasant issues that can arise in readings.

Toward the end of the book instruction is given for the care and storage of cards, how to prepare for a reading, phrasing a question, and doing a layout. Several spreads are included – the one card draw, two 4-card layouts, The Four Powers spread and its alternative The Cunning Path spread, and the more complex 9-card Inner Wheel layout.