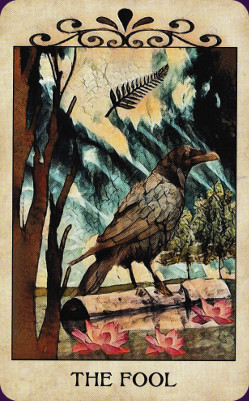 The Crow Tarot is for those drawn to the energy and imagery of these intelligent birds - crows and ravens. The 78 cards are illustrated in a skilled, dynamic style of digital collage. The set comes with a guidebook also written by the artist.


Card Images from the Crow Tarot 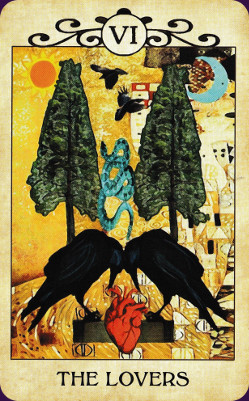 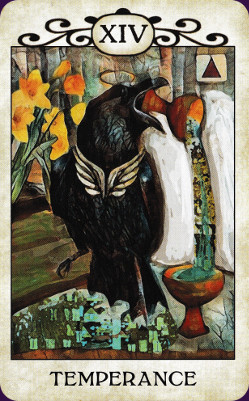 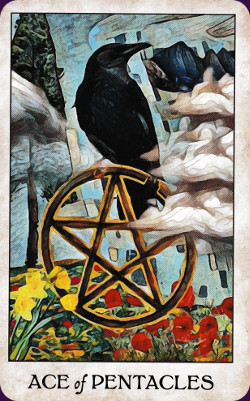 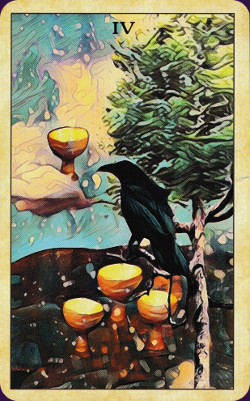 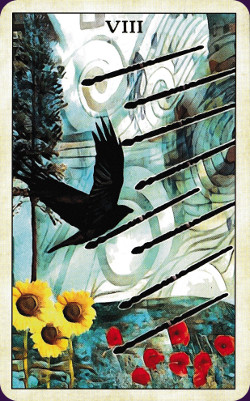 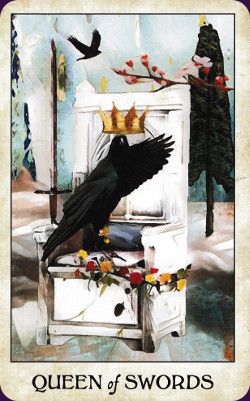 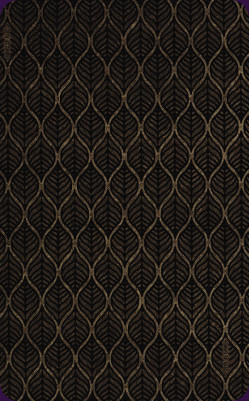 The Crow and the Raven are mysterious and powerful beings whose tales are woven into myths and legends around the world. Corvids are sacred to Apollo, Athena, Lugh, The Morrighan, Odin (Hugin and Munin), and found in Native American (especially the Pacific North West) and Australian Aboriginal mythologies, as well as Siberian, Slavic, Hindu folktales and lore. These super intelligent birds are the heralds and messengers of gods, and the tricksters and shape shifters who change our world.

The Crow Tarot is designed to pay homage to crows and ravens. Throughout the deck crows and ravens remain elusive - clever, strange heralds that linger on the edges between the worlds of the seen and unseen. The deck utilises enough symbolism from the Waite-Smith Tarot to make it learner friendly, and fairly much immediately usable and familiar to experienced tarot readers.

This is a 78 card, fully illustrated traditional tarot deck. It has two Arcana, the Major Arcana has 22 cards, and the Minor Arcana has 56 cards. The Major Arcana uses A. E. Waite’s titles and ordering. The Minor Arcana is divided into four suits – Wands, Cups, Swords, and Pentacles. Each suit has 10 number cards, and 4 Court cards; the court cards being named Page, Knight, Queen, and King. The cards measure 80 x 127 mm, which is a fairly standard size for tarot cards. This particular deck is perhaps a little broader than many commercial decks around, but not by much, and certainly not enough to make them difficult to handle. The card stock is excellent – solid, yet light, and relatively flexible. The cards are smooth with a (very) faintly textured low-sheen finish. The cards shuffle easily and do not clump or stick together. The print quality is very good, with clear crisp lines, no colour bleeds or misprints.

The artist, MJ Cullinane, specialises in digital collaging, and has used it to great effect with the Crow Tarot. Her palette is cool and rich with the earthy colours of the chilly Pacific Northwest (where she lives), with occasional bright highlights that don't overwhelm the overall design. There are faint echoes of Cubism in her textured style, as well as an almost mirage-like shimmer of movement which adds a certain dynamism to the images. The subjects are well observed - a telling tilt of head, gleam of an eye, or flutter of a wing is captured beautifully - yet the crows remain mysterious in their doings, connected to hidden realms, with their own concerns.

Each card in the Crow Tarot has its own individual shade-of-white border (stucco, beige, pale grey, ice blue, bone, marble, parchment etc.). The Major Arcana has a broad border, with the illustration being hemmed in by a single fine line. At the top of each illustration a decorative frame contains the card number; the title is listed at the bottom of the card in an elegant black font. Minor Arcana cards have much thinner borders, numbers are printed directly onto the image at the top, while titles for Aces and Court cards are listed beneath the illustration. The design on the back of the cards is an abstract brown-on-brown feather design, which is completely balanced (down to the U. S. Games imprint) - making it reversible.

The cards and guidebook come packaged in a solid cardboard box, with lift off lid. The lid and box base are printed with images from the deck, as well as a short description of the tarot, and publisher’s details. This is a sturdy little box that can easily be dropped into a shoulder bag or backpack without taking up too much space or weighing it down. It will provide very good protection for the cards, but given that it is cardboard it can still be damaged by careless handling.

The 86-page guidebook is written by the artist, MJ Cullinane, with instructions in English only. This a small, immediate and practical guidebook – it offers no reproductions of the card illustrations, instead opting to cut straight to the chase.

The short 'Introduction’ explains the artist-author’s fascination with crows and how this in turn inspired the artwork of this deck. From here we move straight into the Major Arcana chapter – each card is given a series of keywords which define the essence of the card, as well as an elemental alignment. The image is described and explained giving the Seeker greater insight into the Crow’s message. This is followed by divinatory meanings for both upright and reversed cards. These are commonly accepted interpretations, closely aligned with RWS standards, and with no radical departures from the familiar.

Minor Arcana cards are given no keywords or elemental correspondences, instead moving straight into the description/narrative of the image and accompanied by both upright and reversed interpretations. At the close of the book is an eight-card Crow Spread which is somewhat similar in spirit to the Celtic cross.

If you are drawn to crows and ravens then this is clearly the tarot deck for you. If you feel an affinity for mythology is closely associated with our corvid friends, particularly Celtic, Norse, and Native American, then this is a deck that might be of interest to you. If you are drawn by these dark messengers from the gods, if the crows choose you then the Crow Tarot may be an excellent medium for their messages.

If you are looking for a tarot which pays homage to the Waite-Smith classic without being yet another clone deck then the Crow Tarot should definitely be on your list. Both charming and mysterious, the Crow Tarot is definitely a winner.