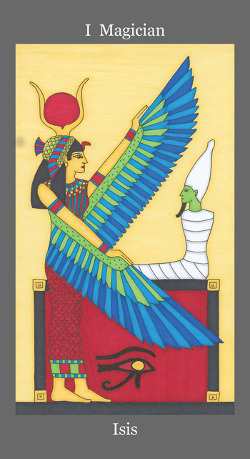 The Dark Goddess Tarot features 78 goddesses and mythical women, figures who might be considered dark, shadow or challenging. The clear, striking art is visually consistent, yet stays true to each goddess's origins. It's a deep and well-made deck. 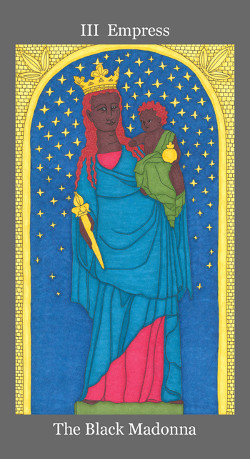 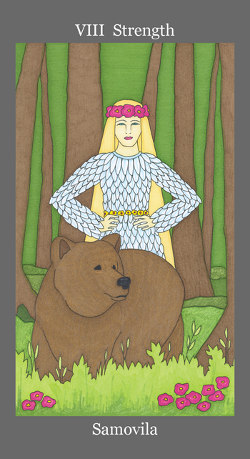 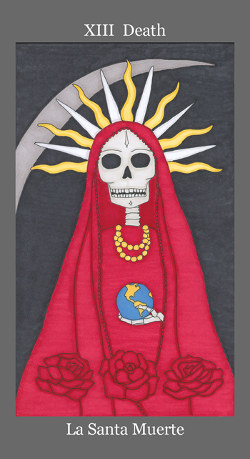 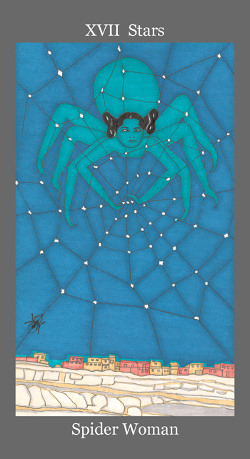 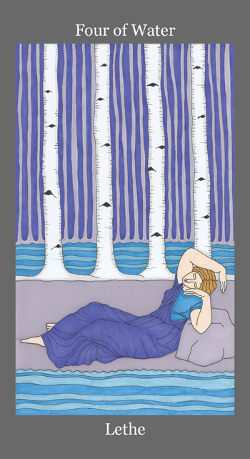 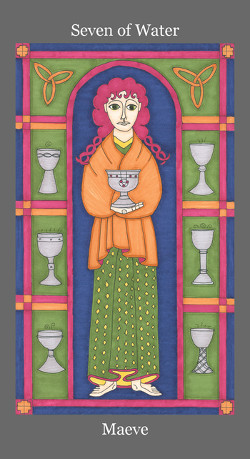 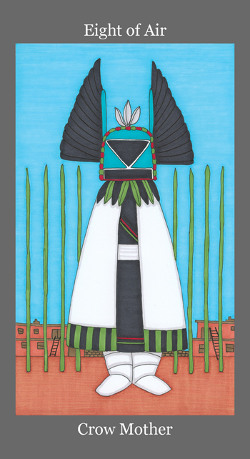 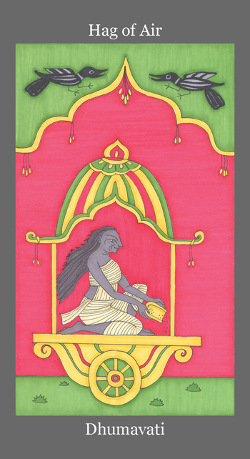 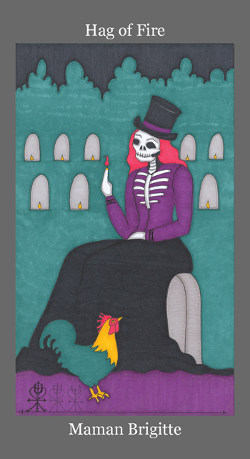 The “Dark Goddess Tarot” is a 78 card deck, which comes with a 27 page LWB (Little White Book). It is packaged in a medium gray lift top, heavy cardboard box, with the image of XIII Death (La Santa Muerte) on the cover, and the image of XVII Stars (Spider Woman) on the back. The deck theme is based on feminine deities from diverse pantheons, that flow seamlessly on two counts: the quality of the artwork, and the assignments of the deities to the cards.

I have obviously been living in the dark ages, because it was a surprise to me that a lady that I admire greatly (artist/author Arnell Ando) was the publisher! Kudos, my friend!

I have worked with Ellen Lorenzi-Prince’s previous deck (“Tarot of the Crone”) for a long time now, and have been looking forward to working with this deck. Both decks touch a side of the feminine that is beneficial to all of us.

Note: The cover image for the LWB is that of the Magician (Isis). There is magic in these cards … yes! Other full page color images interspersed throughout the LWB include the Chariot (Ishtar), the Hanged One (Tiamat), Hag of Fire (Maman Brigitte), the Ten of Water (Ixchel), the Eight of Air (Crow Mother), and the Eight of Earth (Cailleach).

In her introduction Lorenzi-Prince notes that the Dark Goddesses may be beautiful or horrible, loving or wicked. What they share, what unifies them, are powers that are considered disturbing when in female hands. You will see suffering, magic, mystery, death, violence, and transformation. The Dark Goddess Tarot invokes these goddesses, so that their experiences may provide strength and guidance for us in difficult times.

The structure of the deck is traditional, with the following Major Arcana cards being renamed: Emperor/Sovereignty, Temperance/Alchemy, Devil/Corruption, Tower/Destruction, and Judgment/Liberation. Strength is VIII, Justice is XI.

The four suits are renamed after the four magical elements: Wands/Fire, Cups/Water, Swords/Air, and Pentacles/Earth. The goddesses that were chosen for each suit have both an affinity for the respective e element, and for the card they represent. The Court Cards are Page/Amazon, Knight/Siren, Queen/Witch, and King/Hag. Each card is seen as being one view of the goddess represented, one part of her being. The spread that is presented in the LWB is entitled Substance and Shadow, and was developed to give the Seeker a quick, incisive look into everyday challenges.

The cards are presented in text only, with the card number and name, the goddess, what the goddess represents, and a short take on how to use the wisdom contained in the card.

At the end of the LWB is a short section on working with the goddesses. The Seeker is advised to develop a connection with the goddesses, to research them, to mediate with them, and to offer them tokens of affection. It is also noted that patience and respect are a good thing, and that the Seeker should suspend their disbelief.

A second Tarot spread is offered, this one entitled “Goddess Be With You”. It is intended to orient the Seeker to their true self.

The cards themselves are 3” by 5 ˝”, on quality card stock. The backs show a pattern of circles overlapping each other (looking somewhat like scales), in blue and light pink. The backs are reversible.

The artwork is outstanding, as is to be expected from Lorenzi-Prince. The colors are deep and true, and the style is appropriate to the culture that each goddess represents. Some of my favorite cards include the Magician (Isis), the Hermit (Baba Yaga), Justice (Maat), the Ace of Fire (Vesta), the Hag of Fire (Maman Brigitte), the Six of Water (Tefnut), Two of Air (Athena), and the Three of Earth (Norms).

This is an excellent deck to use for dark and difficult times, but it can also be used easily for meditation, ritual, and journey work. It is not a deck to learn to read the Tarot with, but it has great value on its own. It is very special, and should be approached with respect for he goddess energy that it contains.

Creators: Ellen Lorenzi-Prince
Publisher: Arnell's Art 2013
Deck Type: Tarot Deck
Cards: 78
Major Arcana: 22
Minor Arcana: 56
Suits: Fire, Water, Air, and Earth. Goddesses are selected for the suits based upon an affinity for the element as well as for the meaning of the card.
Court Cards: Amazon, Siren, Witch, Hag. The Amazon is fierce and independent, the Siren's power is her sexuality, the Witch is a practitioner of magic, and the Hag walks with death.
Major Titles: Standard with some changes: Sovereignty (Emperor), Corruption (Devil), and Liberation (Judgment).
Card Language: English