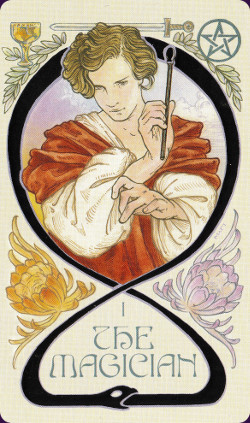 The Ethereal Visions Illuminated Tarot Deck is an elegant, Art Nouveau-inspired deck of 80 cards. The uncluttered, dreamy and romantic artwork is enhanced with metallic gold foil details. There are two extra cards in the deck, The Well and The Artist. 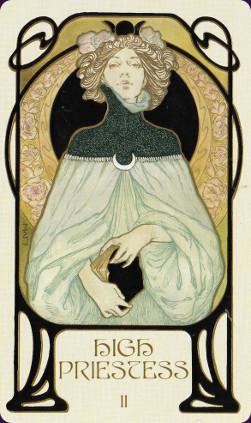 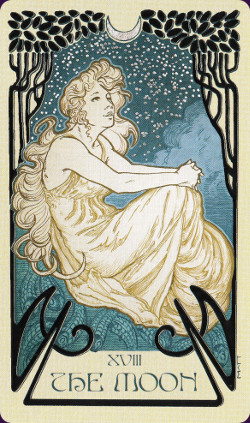 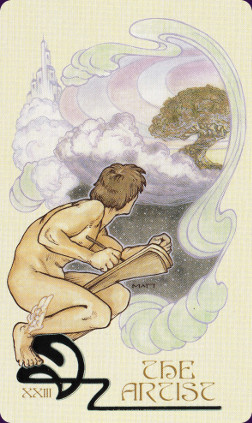 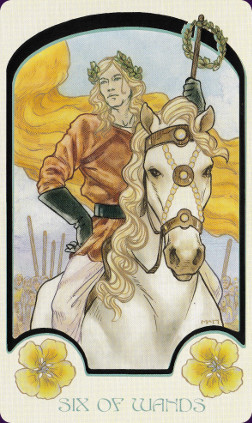 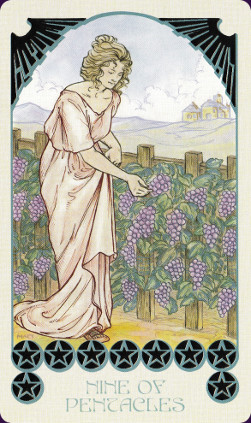 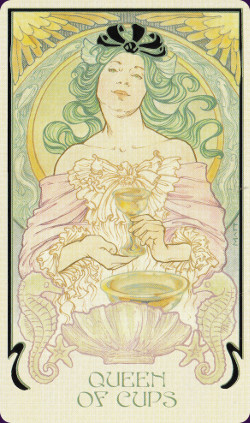 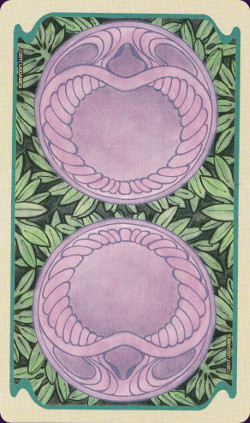 The Ethereal Visions illuminated tarot is a cool, calm deck of elegant, largely art nouveau-inspired images. The deck is modelled on the Waite-Smith tarot - those familiar with the RWS will recognise many of the scenes, and much of the symbolism.

The scenes are uncluttered, shorn of the multitude of symbols that crowd the arcana of other decks. Each image features a character, sometimes a group of people, and occasionally, mystical objects, contrasted against a relatively spare background. The artist, Matt Hughes, maintains the sedate atmosphere throughout the deck via the use of a pastel and eau de nil palette. Hughes eschews strong colours such as black and red - even his outlines are done in restrained earthy tones. It is the gleaming gold-foil illumination that saves this tarot from becoming pale and washed out. Each card features its own unique, sinuous Art Nouveau gold frame, and many feature details picked out in gold foil as well.

This is an 80 card, fully illustrated tarot deck. It features a traditional Major Arcana with cards titled from The Fool through to The World, and includes 2 additional cards; The Well - a card of inspiration, and The Artist - which focuses on creativity. The Minor Arcana consists of 56 cards divided into four suits – Cups, Pentacles, Swords, and Wands. Each suit has 10 number cards, and 4 Court cards – Page, Knight, Queen, and King.

The cards merger 78 x 128 mm, a fairly average sized tarot deck, perhaps a little broader than some on the market, but not noticeably outsized. The card stock is good, quite heavy and not particularly flexible. It has a low-gloss, satin finish which keeps the cards smooth and easy to shuffle, but also adds something to maintaining the delicate colour scheme. The cards are cleanly cut and have rounded corners, both these features help to prevent chipping and peeling along the edges, as well as dog-eared corners.

The cards are quite easy to shuffle, they sit well in one's hands and have a pleasant weight to them. The smooth finish prevents them from sticking or clumping together, and the gold foil seems to stop the cards from becoming so slippery that they become difficult to control. The print quality is outstanding. The the images are clear and crisp, with no blurry lines or misprints. The subtle colour scheme is well maintained - no bleeds or uneven colouring. The gold foil is brilliant, gleaming. However it is not sealed which enhances the gilding but also leaves it vulnerable to fine scratches and scuffing. You will need to be careful when handling this deck and always lay it on a cloth otherwise the dazzling illumination may quickly acquire a ‘bloom’.

Matt Hughes favours a natural, albeit restrained colour palette for scenes in a natural setting, while more dreamy subjects are defined through their misty blues and purples. The deck is dominated by lavenders, mauves, watery blues and greens, and tea colours. These restful colours are offset by the strong gold which illuminates the deck. Just a quick note here, the gilding on these cards is so bright it scans as black, so all the heavy black lines on the images are, in fact, shiny gold foil.

In the guidebook Hughes states that he is influenced by Art Nouveau, Pre-Raphaelite art, and the symbolist movement which the Ethereal Visions tarot readily reflects. His style is predominantly Art Nouveau, featuring sinuous, stylised lines and serene facial expressions; the characters range from Alphonse Mucha’s somnambulistic women gazing out at the viewer from beneath heavy lids, to the idealised mediaeval romanticism of the Pre-Raphaelites.

As noted earlier each image has its own unique gold frame which separates the image from the edge of the card. There is no formal framing that clearly delineates borders between the illustration and the edge of the card. Titles of all cards are written in a classic art nouveau font, and the Major Arcana has Roman numerals well.

The design of the back of the cards is a pair of twisting abstract circular designs (that resembles nothing so much as a frog's skull) in pink and lavender on a background of green leaves. This mirror image is reversible right down to the tiny copyright mark that appears on both sides of the illustration.

The cards come packaged in a solid cardboard box with lift off lid. The cream-coloured box is printed with images from the Ethereal Visions Illuminated Tarot Deck, as well as a description of the deck, and publisher’s information. The box has a smooth, powdery finish and is printed with gold foil details. It is sturdy enough to protect the cards and accompanying guidebook, while remaining compact enough to slip into a shoulder bag or backpack without taking up too much room.

The 45 page Little White Book is written by the artist and contains instructions in English only. The book opens with what has to be the world's most succinct history of the tarot, and breakdown of the deck’s components. This is followed immediately by information about the Major Arcana – each card has an astrological correspondence, a description of the card’s meaning (but no breakdown of the illustration). The divinatory meanings, which are also effectively keywords, are for both upright and reversed interpretations. The interpretations would be classified as fairly standard and do not stray into the realms of reinterpretation or progressive meanings. The two additional Major Arcana cards also have astrological correspondences, The Well (Gaia) and The Artist (Ophiuchus) as well as upright and reversed divinatory meetings.

The Minor Arcana suits each have a small précis which describes astrological, elemental, and directional correspondences as well as the nature of the suit. Individual cards are given both an upright and reversed meaning but no further information about the card is provided. No layouts or spreads are included.

If you find traditional tarot decks to be busy and a little cluttered then the Ethereal Visions Illuminated Tarot may be just the deck you are looking for. It is a deck of elegance and restraint, where emotion is dialled down and tranquil mysticism leads the way. And, if you are interested in the artwork of the Golden Age of Illustration, Art Nouveau, and Pre-Raphaelite romanticism then this tarot may meet your interests.