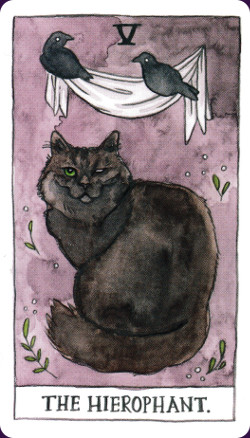 The Cat Tarot is a charming and well-executed 78 card deck, based on observations of feline behaviour familiar to most cat owners (Death is a vacuum cleaner). It's a warm, light-hearted set for tarot lovers and cat lovers alike.


Card Images from the Cat Tarot 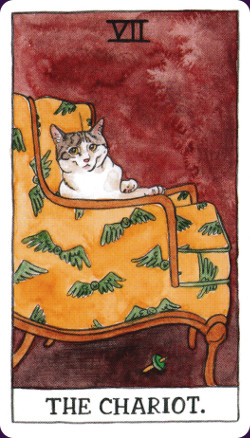 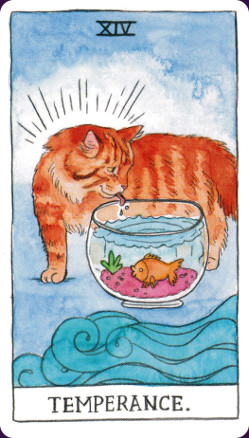 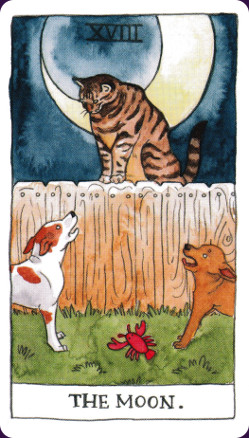 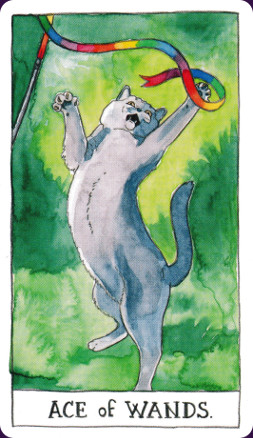 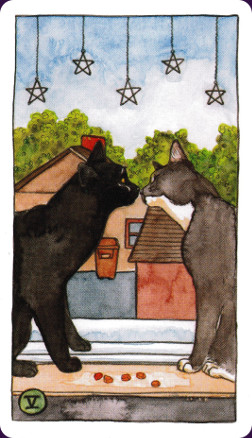 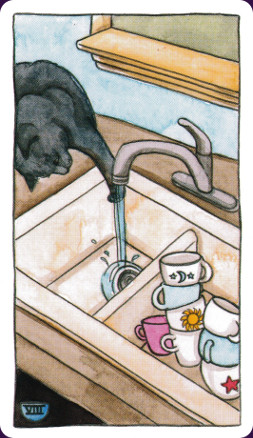 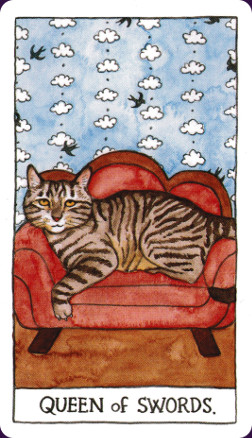 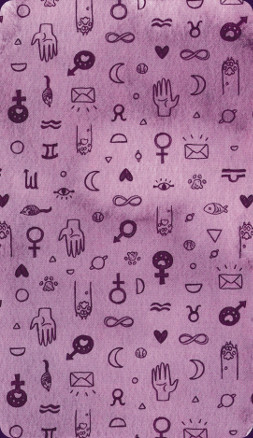 The Cat Tarot is a charming new deck from Meagan Lynn Kott. I hesitate to call it cute (although it really is) because ‘cute’ tends to trivialise its subject matter, and this really is a well-conceived and executed deck. Yes, there are several cat tarot decks on the market, but each and every one is unique and this deck is no exception. Rather than dressing cats up as historical personages or anthropomorphising them and making them perform human deeds Megan Lynn Kott has based this deck on astutely observed cat behaviours that will be familiar to all cat enthusiasts. It looks at the world in the way we imagine cats would perceive life. Just a few examples – The Hermit hides inside a paper bag, Death is portrayed as a vacuum cleaner (foreboding but not fatal), and The Devil is a drooling dog. It is also based on the Waite-Smith deck, and finds clever and unusual ways to present the concepts behind the WST in a feline fashion.

This is a fully illustrated 78 card deck, with 22 Major Arcana cards and 56 Minor Arcana cards. The Major Arcana has the 22 familiar titles and ordering of a standard RWS deck. The Minor Arcana is divided into four suits of 14 cards each. The suits are Wands, Cups, Swords, and Pentacles; each containing 10 number cards, and 4 Court cards – Page, Knight, Queen, and King. Wands are represented by cat toys, Cups by food and water bowls, Swords by the cats’ very own fangs and claws, and Pentacles by cat biscuits and food treats.

The cards measure 70 x 120 mm – this is a fairly ordinary size for tarot cards. There is plenty of space given on the face for the illustration, titles and numbers; and the cards sit comfortably in one's hands without being difficult to handle. The card stock is light, sturdy, and moderately flexible without being flimsy. The deck as a whole is not noticeably bulky. The finish is glossy and smooth, which facilitates easy handling and shuffling without any tendency for the cards to stick together or clump. The print quality is excellent, with each image being crisp and clear. The colours are bright, the outlines sharp, the titles clear and legible. There are no colour bleeds, no misprints or blurring.

The illustrations are a combination of line drawing and watercolour. The artwork itself captures the charm and cheekiness of cats with a sharp eye for detail and expression. The artist uses a broad palette of natural colours, some bright and chirpy, others subtle and muted. The artist is not aiming for photorealism but rather offers her own artistic interpretation of our feline friends, her style is personal yet immediate and accessible. This tarot artwork has a warm and friendly feel to it rather than the distant air that some more commercial styles can produce. Given the wonderful array of cat facial expressions and sinuous movement she captures, Megan Lynn Kott is clearly a cat lover.

Each image is delineated by a narrow black frame and a broader white border. The card’s number is given at the top of the illustration itself, while the title is given in a blank white space beneath it. All titles and numbers are hand written (as opposed to a commercial font). The design on the back of the cards is a mixture of occult and astrological symbols interspersed with cat’s paws, fish, paw prints, and mice in dark purple on a lavender background. These little symbols are carefully balanced so as to make the design reversible.

The cards come packaged in a close-fitting, solid cardboard box with a lift off lid. The base box is pale lavender and printed with images from the cat tarot, as well as a brief description of the deck, the publisher, and pricing information. The ends of the box both feature the image of a little crouching cat from the Knight of Wands. The inside of both the base and the lid are printed with the same design used on the back of the cards, only this time it is dark blue on sky blue print. The lid of the box has half circle cut out at each end – this not only makes it easy to remove the lid, but allows the little cat printed on the ends of the base box to peer out at the user. The illustration on the lid is unique and not featured on any of the cards (although it is a little similar to the Three of Swords). It shows a winking cat playing with cards on a green and blue background. The along with deck’s title is a small array of occult symbols including a mouse and fish, all in a hologram foil.

The 108-page guidebook is written by Julia Smillie, with all instructions in English. The book kicks off with an introduction to the tarot, which is in essence a potted history of the evolution of tarot. This is followed by a description of how a tarot deck is composed, what each Arcana and suit represents. There is a brief and personable description of how to prepare for a reading, which includes inviting a cat along for their received wisdom.

The ‘Spreads and Layouts’ section has seven divinatory spreads, including the inevitable one card draw, the three-card past-present-future layout, a five-card spread called The Paw, the Celtic Cross, the Horseshoe, a nine-card Mandala spread, and the Tree of Life layout. This is accompanied by some excellent advice, albeit brief, on how to read the cards.

Following this the book is divided into two sections, the first dedicated to the Major Arcana and the 2nd to the Minor Arcana. Each Major Arcana card has its own double page - one side taken up with a black-and-white reproduction of the card, the other with a (very) brief description of the card’s illustration. Divinatory meetings are given for both upright and reversed cards. While these interpretations are fairly standard, they do include the benefit of kitty wisdom and have their own subtle humour which references the artwork. The divinatory meanings of the Cat Tarot err on the side of being positive, without denying that grief and difficulty steals into our life from time to time.

The Minor Arcana cards are given less space, with much smaller reproductions of the illustrations. However, the descriptions are longer and the divinatory information, particularly for the Court cards, is equal to if not longer than that given to Major Arcana cards.

This is a particularly helpful little guidebook, tailored specifically for this deck and informative enough that it can be applied outside the confines of the Cat Tarot.

It's a no-brainer that if you love cats this is a tarot deck for you. If you are looking for a tarot that is light-hearted yet takes itself seriously, or one that is nonthreatening (no doom and gloom) then this is the perfect deck. If you are looking for a deck that children or tweens could use I wouldn't hesitate to recommend the Cat Tarot. All round this deck is charming, warm, and user-friendly. Absolutely lovely.